For Blaine Graboyes, CEO of GameCo, the keyword is fun. 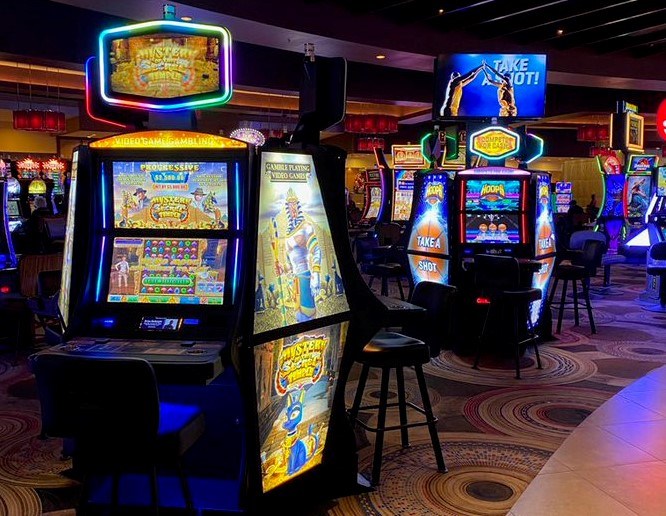 A bank of GameCo games were recently installed at the Pearl River Casino in Mississippi. GameCo CEO Blaine Graboyes said the company plans to feature its games on casino floors and offer esports tournaments next year. (Image: GameCo)

Graboyes’s Las Vegas-based company produces video game gaming machines that combine both elements of chance and skill. But when it comes down to marketing the games, skill takes a back seat to fun.

Fun is what enables GameCo, according to its research, to attract a younger crowd to the slot machine areas of casino floors. Graboyes said that GameCo machines in certain casinos generate 60 percent of their handle from players age 21-to-49, a figure five-times higher than what that demographic bets on traditional slots.

As the company adds new casinos to its client base, it’s seeing similar results, he said.

“We set out to give casinos products that would monetize a younger Gen X and millennial audience, and we’re very proud to have the data now after three years that proves that,” Graboyes said. “So, whether we’re at a tribal casino in the rural South, or a commercial casino in Nevada, we are seeing that anywhere between 60-to-80 percent of play on our games is (age) 49 and under.”

In October, GameCo announced it entered a technical trial of its gaming machines in Nevada casinos. The trial allows the company to install two of its sports-themed games in The LINQ Hotel & Experience, the MGM Grand, and Park MGM in Las Vegas. The trial also includes operating the games at the Atlantis Casino Resort in Reno.

Graboyes said he expects the company will launch additional games in Nevada after the trial concludes. The company also produces video games under such titles as Star Trek, Terminator 2: Judgement Day, and Mission: Impossible.

“We have a lot of demand and opportunity for the games, both on the Strip and in local casinos,” he said. “We’ve seen really great performance in terms of who’s playing the games and the performance metrics on the games, particularly at The Linq, which I think is a really great venue that they’ve designed for attracting a new, younger audience.”

Not only does GameCo expect to expand in Nevada, the company also has casinos in Arizona, New Mexico, Ohio, Canada, and even Europe targeted to install its gaming machines. That does not include expansion opportunities at its current casinos in California, Mississippi, and Oklahoma.

GameCo’s studies indicate that the average customer averages about $1.50 per bet. They also spend up to 30 minutes on the machine, making between 10-to-15 bets per minute.

Graboyes said GameCo will be launching a new product in the weeks ahead that will help casinos attract people who play esports, or multiplayer video game competitions.

There are a couple different ways the company plans to offer esports tournaments, he said. One way is in a head-to-head mode that allows up to eight players to play the same game. The winner takes the pot, while the house takes a rake.

Graboyes said the multiplayer aspects allows casinos to get involved in esports and get more people on their floors.

“We’ll be launching our own casino esports league,” he said. “We’re just starting the planning now with the first properties that’ll be getting these. We’ll be running regular events on, let’s say, Friday and Saturday night at casinos, and we’ll be working with some of the larger casino brands to help them create esports leagues directly on our products on their casino floor.”