One of the NFL’s most storied playoff rivalries will take center stage again on Sunday, as the Green Bay Packers head to San Francisco to take on the 49ers in the NFC championship game. 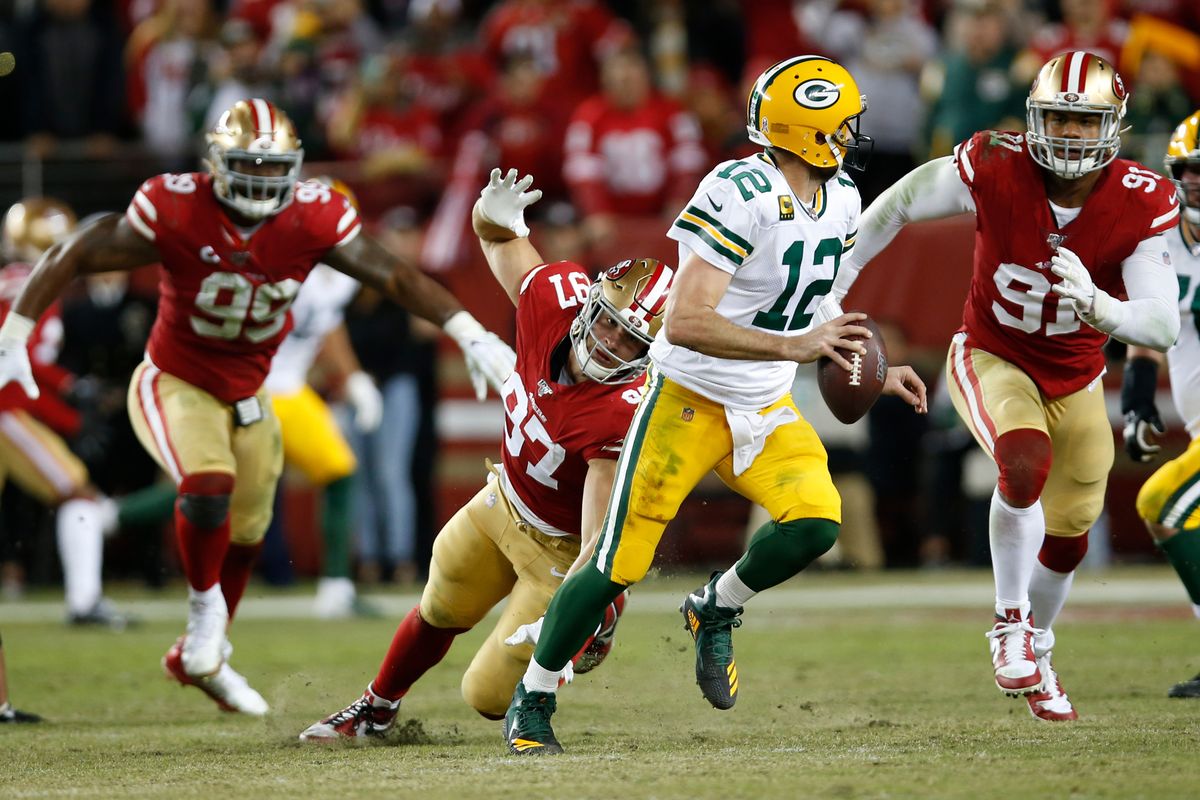 The San Francisco 49ers are a touchdown favorite over the Green Bay Packers in the NFC championship game on Sunday. (Image: Michael Zagaris/Getty)

San Francisco has the advantage in this meeting, with FanDuel Sportsbook posting the 49ers as a 7.5-point favorite over the Packers.

These two teams have met in the playoffs seven times since 1995, with the Packers holding a 4-3 advantage in those games. But the latest of those encounters came in 2013, leaving few notable players – with the exception of Green Bay quarterback Aaron Rodgers – on either roster who have taken part in previous meetings.

“We’ve had a lot of games and had some big games in the playoffs,” veteran 49ers left tackle Joe Staley told reporters. “Seem to find each other all the time during the regular season, as well. A team that we are familiar with and we’ve had a lot of great battles with throughout the years.”

More relevant might be the 37-8 drubbing the 49ers put on the Packers in Week 12 this year. That game was never competitive, with San Francisco taking a 23-0 halftime lead and coasting to victory.

For Green Bay to have any hope in the NFC championship game, they’ll need to make dramatic changes from that November matchup, something head coach Matt LaFleur is well aware of.

I think you have to look at everything,” LaFleur told reporters. “I’m going to go back and watch that tape again to really try to grasp what happened and why it happened, and how can we adjust, and what are we going to do to ensure it doesn’t happen.”

San Francisco head coach Kyle Shanahan also remembers that game well, but he’d rather his team forget that it ever happened.

“Don’t be that stupid because that’s not real,” Shanahan told reporters, saying what he’d tell his team if he felt anyone was overconfident. “This is about Sunday’s game. I can give a thousand stories of things like that, playing games in my history I’ve been a part of.”

That win was part of an incredible regular season for the 49ers, who went from a 4-12 record last season to 13-3 this year, a mark good enough to earn the No. 1 seed in the NFC. In fact, both teams have a chance to go from a losing record to the Super Bowl just a season later, as the Packers only managed a 6-9-1 record the previous year.

The Packers come into the game as a significant underdog: Green Bay is a +270 pick to win the game outright, while bettors have to risk $320 to win $100 on the 49ers. But if there’s one good sign for the Packers, it’s that they’ve won six straight since that loss to the Niners, and LaFleur thinks he’s bringing a different team to San Francisco on Sunday.

“I’d like to think that we’ve improved throughout the course of the season, especially the last six weeks,” LaFleur told reporters. “Certainly, I don’t think we played our best that day. You’ve got to give them a lot of credit…But in order to compete with them, in order to have a chance to beat them, we’re going to have to be at our best – and that’s everybody, all 11 on that field.”