A chance for an SEC title won’t be on the line Saturday when Alabama rolls into Auburn for the 84th installment of the Iron Bowl. Still, there’s plenty at stake for the visiting Crimson Tide. 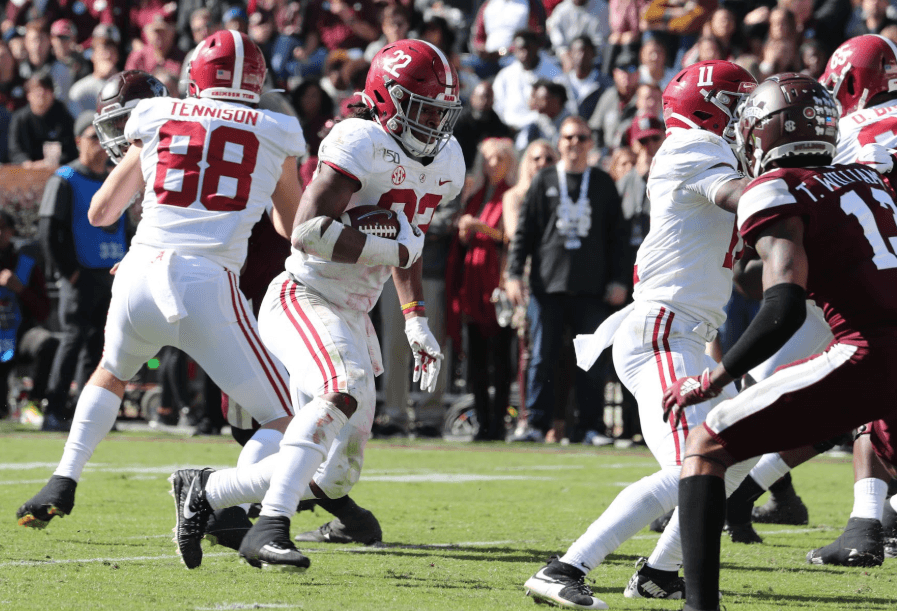 At No. 5 in this week’s College Football Playoff rankings, Alabama is currently the first team out when it comes to deciding who will play in the national semifinals. However, there’s a good chance No. 4 Georgia will fall to No. 2 LSU when those teams meet for the SEC Championship next week.

If that happens, Alabama could slide into the final spot over other conference champions as their only loss as been a 46-41 decision against LSU earlier this month. However, Alabama still has work to do on its end.

For starters, the Crimson Tide must prove they can compete with the elites, like No. 15 Auburn, without Tua Tagovailoa. The star quarterback suffered a devastating hip injury in the LSU loss and is gone for the season.

Mac Jones has played well in leading Bama to two lopsided wins over Mississippi State and Western Carolina, but he’ll face a Tigers defense that holds opponents to less than 200 yards passing per game.

As this will be Jones’ first road game that he’ll start, coach Nick Saban said at a Wednesday press conference it will be important for the redshirt sophomore to remain calm in a very hostile environment.

I think it’s really important that the players around him play well because that’s going to help his confidence,” Saban said. “Maybe then he could have a little success, which is always a good thing, especially early on.”

Alabama started as a 4-point favorite at most sportsbooks and that has since dropped at least a half-point, although Caesars is offering the Tide spotting just 3 points.

Over at FanDuel, 72 percent of bettors are backing Alabama and giving 3.5 points, according to oddsFire. Those bettors have put up 71 percent of the cash on point spread wagers.

The moneyline shows the Crimson Tide getting -170 odds at FanDuel, compared to Auburn getting +145. While FanDuel’s moneyline bettors are split 50/50 on bets, wagers on Alabama (-170) represent 59 percent of the action. Auburn’s odds straigt up are +145.

William Hill bettors have been backing the Crimson Tide more heavily. Through Wednesday, 80 percent have been giving up 3.5 points. Those bets equate to 82 percent of the money wagered.

Auburn’s defense will be the toughest unit Alabama’s offense has played all season. The Tigers have averaged giving up just 306.5 yards a game, good for 14th in the country. On the ground, they’ve given up less than 110 yards a game, 18th best.

If the Tigers can contain Najee Harris, whose 942 rushing yards ranks eighth in the SEC, then that will force more of the production on the untested Jones.

On the other side of the ball, Auburn’s offense will go up against a Crimson Tide defense that’s 16th in total defense, allowing 315.4 yards per game. The Tigers offense (55th ranked, 427.2 ypg) isn’t nearly as potent as Alabama’s (7th ranked, 513.7 ypg), but a lot of those Bama yards were picked up while Tagovailoa ran the offense.