For the first time since the 2013 season, Alabama was eliminated from the college football championship chase in the regular season. 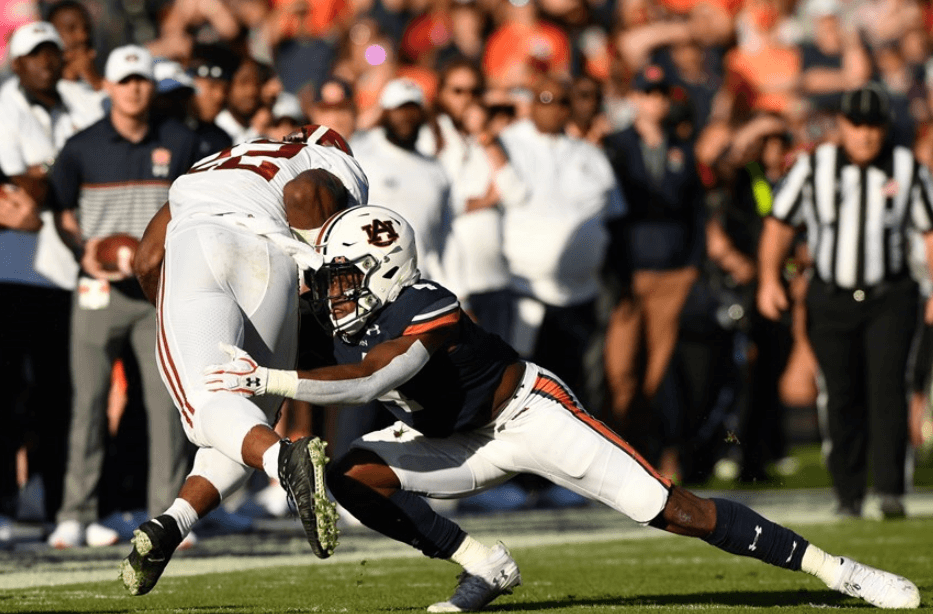 The Crimson Tide lost 48-45 to Auburn on Saturday. Coupling that with the team’s loss a month ago to LSU it means that the selection committee for the College Football Playoff will not be considering Alabama for one of the four spots in the semifinal games that’ll take place on Dec. 28. The Crimson Tide were ranked fifth by the committee last week and will certainly fall from that spot.

By Sunday, sportsbooks had removed Alabama from its futures board for the national championship. For most of the season, the Tide were among the favorites to win the title. Their odds were +250 back in the preseason.

In the post-game press conference, Saban said the team’s lack of discipline derailed its playoff chances. The Tide committed 13 penalties, and despite outgaining Auburn 515-354, Alabama allowed two interceptions to be returned for touchdowns.

We all feel bad, and we all should. I should feel bad that we didn’t do a better job with our team, and the players, it’s OK for them to feel bad, too, because we didn’t play as well as I hoped that we would,” Saban said.

Alabama will still play in a major bowl, but that – as well as the semifinalist selections – will not be announced until next Sunday.

Oddsmakers see the college football championship as a three-team race.

First, there’s Ohio State, the top-ranked team in the committee’s rankings. The Buckeyes easily dispatched rival Michigan 56-27 on Saturday to cap off a 12-0 regular season. Most experts believe even if the Buckeyes lose to Wisconsin Saturday in the Big Ten championship, that they would still be one of the teams selected.

DraftKings lists OSU as its title favorite with odds of +150. The Buckeyes are also the favorite at William Hill, which is offering +160 odds. They’re the second choice over at FanDuel with +165 odds.

Defending champion Clemson, despite playing a weaker schedule than other contenders, has been one of the favorites all season long and have for the most part dominated their competition. The Tigers, too, are 12-0 after beating South Carolina Saturday.

Clemson is the FanDuel favorite for the title, with odds of +140. DraftKings offers the Tigers at +225, and William Hill offers them at +230.

Like Ohio State, LSU has likely done enough to earn a bid even if they lose to Georgia in the SEC title game Saturday. The undefeated Tigers, led by all-but-certain Heisman Trophy winner Joe Burrow, have wins over Alabama, Auburn, and Florida, all highly ranked squads. A win over the fourth-ranked Bulldogs Saturday could give LSU the top seed in the playoff.

William Hill lists LSU at +230, while DraftKings offers the Tigers at +250. However, FanDuel offers the greatest value on LSU with +400 odds to win it all.

So, who are the other contenders? Here are their odds, as well as an explanation on how they can get the fourth spot in the playoff.

Georgia at 11-1 would likely secure the spot by beating LSU Saturday. Despite an ugly overtime loss to South Carolina, the Bulldogs, currently in the committee’s No. 4 spot, have wins over Notre Dame and Florida, and a win over the Tigers would give them a much better portfolio than the teams below them in the committee’s rankings.

William Hill offers Georgia at +850, while FanDuel and DraftKings both have the Bulldogs at +1200.

Utah has just one loss on the season, but it’s to USC, the only opponent that’s ranked. However, a win over Oregon in Friday’s PAC 12 title game and a Georgia loss may catapult the currently sixth-ranked Utes into their first playoff appearance.

The committee’s seventh-ranked team, Oklahoma, survived a number of close calls in the regular season to finish 11-1. That included rallying from a 28-3 deficit to beat Baylor on Nov. 16. Those two teams will meet again Saturday for the Big 12 title. They definitely get in with a win and losses by Georgia and Utah. However, if only Georgia falls, they still may be able to leapfrog the Utes for the final spot.

The remaining teams on the board – Baylor, Wisconsin, and Oregon – would need a win and a lot of help to be considered for the final spot for the college football championship.

Oregon (+15000 FD, +50000 DK) must beat Utah to get a signature victory, but the Ducks have two losses as well. However, they have a last-second loss to Auburn which might help influence some committee members.