The NFL Thanksgiving schedule gives us three games to watch on Thursday. The action kicks off at 12:30 pm ET when the Detroit Lions host NFC North rival Chicago Bears. At 4:30, the Dallas Cowboys host the Buffalo Bills, and at 8:20 the Atlanta Falcons host the New Orleans Saints. 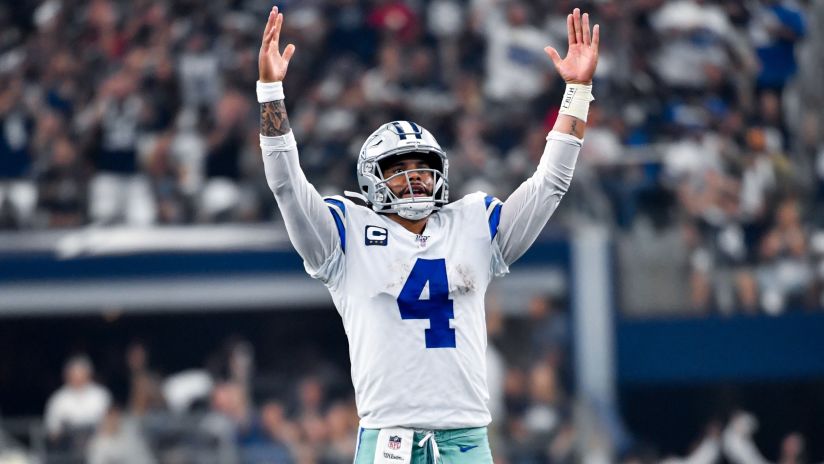 Dallas quarterback Dak Prescott hopes to get the Cowboys back to their winning ways on Thursday, when they host the Buffalo Bills. (Image: DallasCowboys.com)

Here’s a look at the odds and betting trends for each game.

The Bears (5-6) started off as 1-point road favorites. However, the line jumped to 5.5 points by Wednesday afternoon, when reports circulated that the Lions (3-7) would start David Blough at quarterback over Jeff Driskel, who will not start due to a hamstring issue. Blough is an undrafted rookie who the Lions got in a trade with the Browns in August, and he’ll be the third quarterback Detroit has used this season, as veteran signal caller Matthew Stafford recovers from a back injury.

In four preseason games, he completed 25-of-43 passes for 271 yards to go with two touchdowns and two interceptions. Driskell, though not 100 percent, will serve as Blough’s backup, and the Lions have tight end Logan Thomas as their emergency QB.

With the Lions’ quarterback situation in flux, bettors have jumped on the Bears. FanDuel reports 82 percent of all point spread bets have been placed on the Bears, representing 84 percent of the money wagered. That’s up slightly from 80/80 earlier in the week, when the line was smaller and Driskell was the Lions presumed starter.

Not surprisingly, the moneyline odds have changed dramatically for the game. FanDuel initially had the Bears at -121 and the Lions at +104. As of Thursday morning, the Bears are now at -230 and the Lions are at +198.

The over/under on the game is 36.5, one of the lowest totals all season. Even with an untested Lions quarterback and a Bears offense that averages just 17.1 points a game, 60 percent of FanDuel bettors are on the over.

Could Thursday be the final time we see Jason Garrett coach the 6-5 Cowboys? Oddsmakers don’t think so, but bettors aren’t as sure.

For the record, Cowboys owner Jerry Jones did go on NFL Network’s Good Morning Football to say he supports the 10-year coach. However, he also added that he has expectations that have not been met.

Four of Dallas’s losses have come by four points or less, including last week’s 13-9 loss at New England.

The moneyline is tilted even more toward the Bills. With +250 odds at FanDuel, the Bills have drawn 76 percent of the straight-up bets, representing 72 percent of the cash wagered.

Initially set at 44.5 points, the over/under has risen to 47 at most books. Even with the number going up, 68 percent of the bets at FanDuel are on the over, representing 73 percent of the money.

The 9-2 Saints can be the first team to clinch a playoff spot this season, and they can exact a measure of revenge, too, with a win on Thursday night.

One of the more surprising outcomes this season was the Falcons 26-9 upset in New Orleans three weeks ago. The Falcons were 13.5-point underdogs in that game and had just one win coming into that game.

“Those guys played well and beat us, and that’s our league sometimes,” New Orleans coach Sean Payton said at a press conference earlier this week.

With the game in Atlanta (now 3-8) this week, the spread is still in New Orleans’ favor, but only at 6.5 points at FanDuel and seven points at William Hill.

Bettors at FanDuel are heavily behind the Saints, as 90 percent of the bets and money are on the favorites. At William Hill, just 53 percent of the spread bets are on New Orleans. However, that still represents 86 percent of the money wagered.

At -290 on the FanDuel moneyline, the Saints have attracted two-thirds of the straight-up bets. That equals 62 percent of the money wagered.

Bettors expect a high-scoring game, as most are betting the over, which is set at 48.5. At FanDuel, 88 percent of bettors are on the over, representing 86 percent of the money.