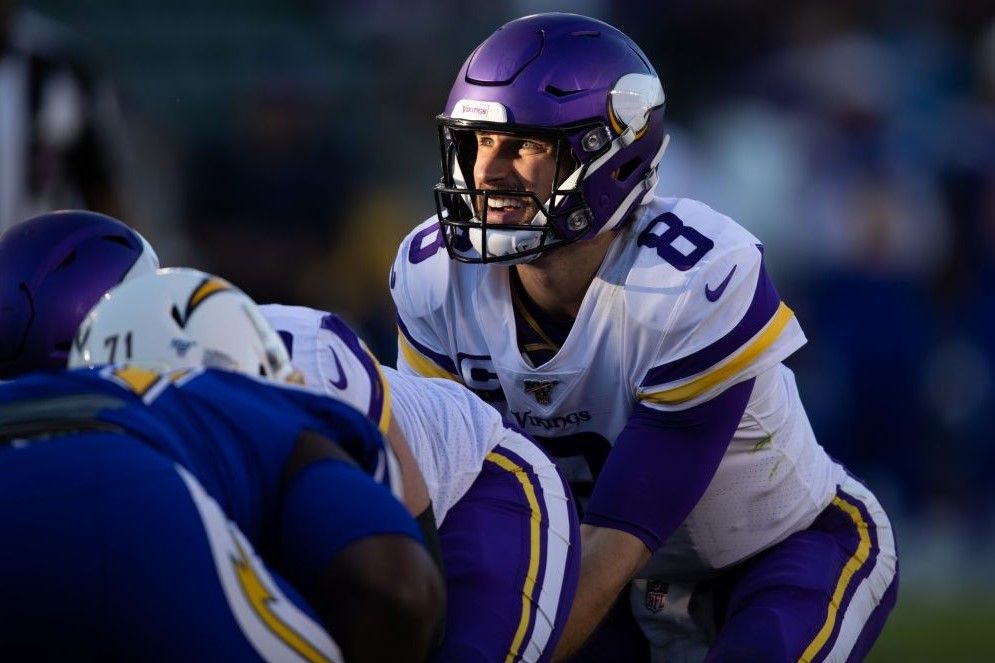 Minnesota Vikings quarterback Kirk Cousins is winless in eight starts on Monday Night Football. He gets a chance for his first win when the Vikings host the Green Bay Packers, (Image: Andy Kenutis/Vikings)

The 11-3 Packers lead the NFC North by a game over the 10-4 Vikings, and with a win, they’ll secure the division title and greatly improve their chances for a first-round playoff bye. Even with a loss on Monday night, Green Bay can still clinch the division next week with a win at Detroit.

Minnesota, like the Packers, has already clinched a playoff spot. However, if the Vikings win out and the Packers lose or tie against the Lions, Minnesota gets the division crown. They also would have an outside chance for a first-round bye if New Orleans loses at Carolina next week.

Straight-up, the Packers are +190 at William Hill and DraftKings, while FanDuel and PointsBet offer them at +180.

While the sportsbooks differ on the point spread and moneyline odds, they’re in agreement with the total score, setting the over/under at 47.

The final Monday Night game of the NFL season kicks off at 8:15 pm ET. ESPN will broadcast it.

Bettors Back the Pack

Bettors over at FanDuel have little hesitation supporting the road dog for Monday Night Football.

They’re jumping on Green Bay getting the points. According to oddsFire, 78 percent of spread bettors are on the Packers. That accounts for 76 percent of the handle.

The handle’s tilted even more on the moneyline, with bettors seeing a chance to nearly double their wager. As of Monday afternoon, 91 percent of bettors are willing to take the Packers straight up. That equals 88 percent of handle.

There’s less agreement on the over/under. FanDuel reports that 57 percent of bettors are on the over, with that equaling 60 percent of the money.

There are a couple factors at play as to why bettors are fading the Vikings on Monday night.

One is starting quarterback Kirk Cousins and his 0-8 career record on Monday Night Football, with the most recent defeat taking place on Dec. 2 at Seattle. However, a look at his stats shows the record isn’t necessarily on Cousins’s performance.

In those eight Monday night starts, according to statistics from ProFootballReference.com, he’s completed better than two-thirds of his passes (204-of-305) for 2,226 yards, to go with 10 touchdowns and five interceptions. In four of the games, Cousins posted a quarterback passer rating of better than 100.

When talking to reporters last week, Vikings coach Mike Zimmer brushed off any notion that Cousins, who has thrown for 3,481 yards with a 70.5 completion percentage and a 25-to-5 touchdown-to-interception ratio this season, isn’t a primetime quarterback.

Kirk has done a great job for us this year,” Zimmer said. “He’s been outstanding, he’s played great all year long. If we get beat on Monday night, it’s not going to be because of Kirk Cousins. It’s because we didn’t win as a team.”

A more pressing issue for the Vikings on Monday night might be the absence of starting running back Dalvin Cook. Cook, who previously battled a chest injury earlier in the season, injured his shoulder in last week’s win against the Los Angeles Chargers.

In his third season, Cook has finally become a 1,000-yard rusher. But his shoulder injury may keep him out of the playoffs. Further complicating the rushing attack is that second-stringer Alexander Mattison is battling an ankle injury and was listed as questionable over the weekend.