A nightmare became reality Saturday night, as what looked to be a successful and exciting Breeders Cup ended with questions about the future of horse racing and the future of Santa Anita. 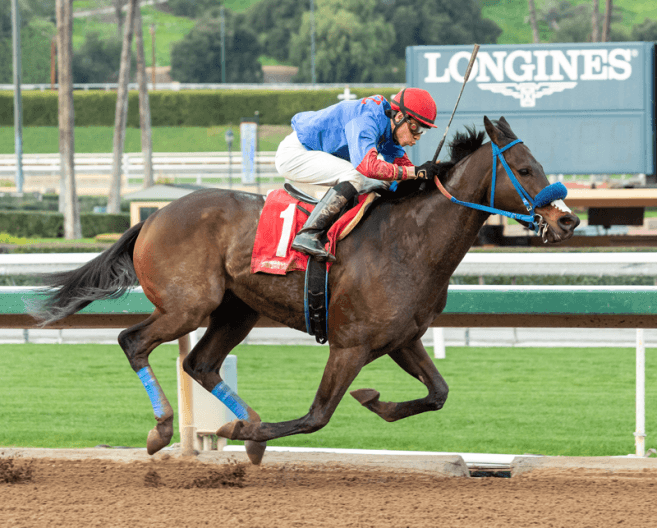 Mongolian Groom, shown here winning an allowance race at Santa Anita earlier this year, was euthanized Saturday after suffering an injury in the Breeders’ Cup Classic at the California track. The gelding was the 37th horse to die there since December. (Image: Santa Anita Park)

Mongolian Groom, a gelding running in the Breeders’ Cup Classic, pulled up at the top of the stretch after injuring his left rear leg. The horse was in second place at the time and vying for the lead when the incident occurred, forcing track officials to shuttle the Enebish Ganbat-trained entry off the track in a medical van. After veterinarians consulted, the horse was destroyed, becoming the 37th to die at the Southern California track since last December.

“The death of Mongolian Groom is a loss to the entire horse racing community,” the Breeders’ Cup said in a statement. “Our equine and human athletes’ safety is the Breeders’ Cup’s top priority. We have worked closely with Santa Anita leading up to the World Championships to promote enhanced equine safety. Santa Anita has implemented numerous industry-leading reforms to enhance the existing health and safety measures with the intent of providing a safe racing environment. In addition, Breeders’ Cup always observes the most thorough up-to-date medication practices and restrictions, testing protocols, equine security and surveillance program, veterinary exams, injury management protocols and racing surface testing.”

Despite the Breeders’ Cup claims, Mongolian Groom’s death brought further criticism of Santa Anita and calls for the track to suspend racing. That increased scrutiny comes even after a scathing letter from US Sen. Dianne Feinstein, California’s senior senator, to the California Horse Racing Board (CHRB), in which she stated a fatality or injury could prompt leaders to re-examine the sport’s future.

Video replays, both by PETA and NBC Sports – which broadcast the race – show the horse pulling up on the final turn shortly after jockey Abel Cedillo applied his whip to Mongolian Groom.

So even if he was in pain and wanted to slow down, he could not have done so,” PETA Senior Vice President Kathy Guillermo said in a statement. “Striking horses during racing must be banned now. We can’t wait for the rule-making process when horses are dying.”

The CHRB first addressed crop use back in March. However, the rule remains in place that allows jockeys to use the crop three times before giving the horse a chance to react. The new rule would allow jockeys to only use it if they feel their safety or the horse’s is in jeopardy.

Mike Marten, a CHRB spokesman, told Casino.org the item will be on the board’s Nov. 21 agenda.

PETA’s call didn’t stop there as the group also wants racing to be suspended nationwide until several measures, including the installation of synthetic racing surfaces and the installation of CT scanning equipment at all tracks. It also calls for horses to not receive any medications for at least two weeks before they race.

In a statement, the Humane Society of the United States (HSUS) said Mongolian Groom’s death shows how poorly regulated horse racing is as a sport across the country.

“American horse racing is broken and its equine athletes are paying the price with their lives,” the organization said. “The decision to hold the Breeder’s Cup at Santa Anita before the results of investigations into the spate of recent deaths was ill-advised. We believe that a suspension of racing at this track is warranted until the investigations of those deaths, and now the death of Mongolian Groom, are completed and released.”

Racing continued Sunday with the closing day of the track’s fall meet. Santa Anita, for now, is set to resume racing on Dec. 26.