Buckeyes Look to Continue Dominance of Rival Michigan on Saturday


Ohio State will seek to extend its winning streak over its archrival when the Buckeyes travel to Michigan Saturday for the final week of college football’s regular season. 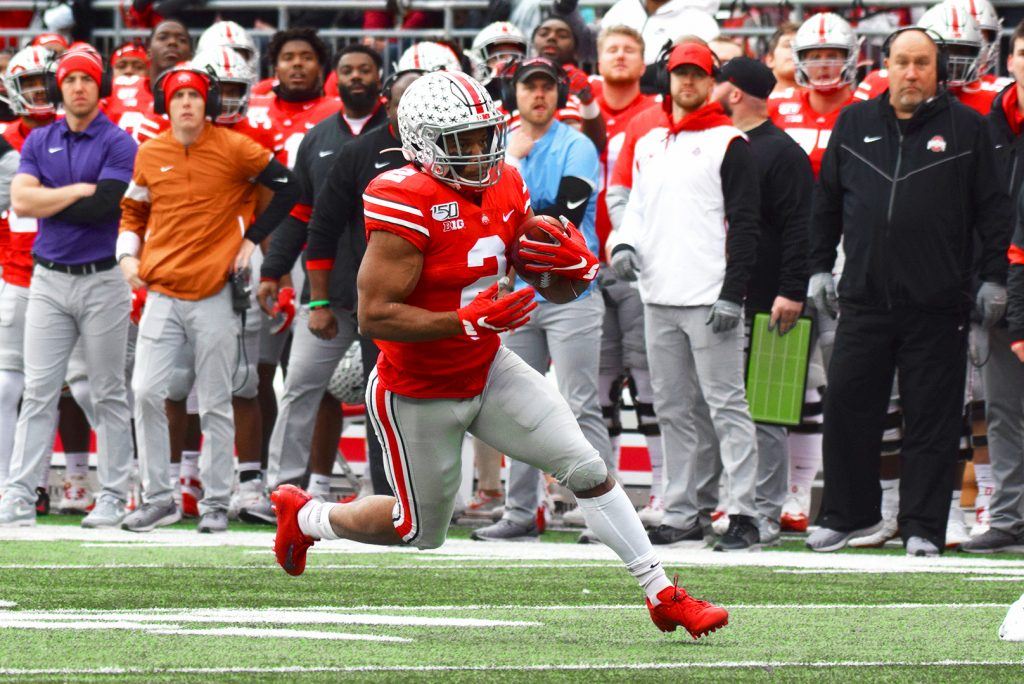 Ohio State running back J.K. Dobbins is one of the top rushers in the Big Ten, having amassed 1,446 yards on the ground. He and the Buckeyes will play at Michigan Saturday. (Image: Ohio State Athletics)

The 11-0 Buckeyes, ranked No. 1 in this week’s College Football Playoff rankings, have won the last seven against the Wolverines and 14 of the last 15 in the annual series. However, even if they falter against the No. 13 Wolverines (9-2, 6-2 Big Ten), Ohio State, by virtue of its 8-0 Big Ten East record has already clinched a spot in next weekend’s conference title game.

Oddsmakers doubt that will happen, though, as they made coach Ryan Day’s squad at least an 8-point favorite. At some sportsbooks, such as Caesars, Ohio State is a 9.5-point favorite.

The Buckeyes are even getting serious action on the straight-up moneyline despite being heavy favorites. FanDuel, which is offering Ohio State at -320, is getting 57 percent of moneyline bets on the favorite. Those bettors are ponying up 73 percent of the cash. Michigan’s moneyline odds are +250.

Earlier in the week, William Hill reported Ohio State, which currently is an 8-point favorite there, attracted 74 percent of point spread bettors and 76 percent of the betting share through Wednesday.

The game kicks off at noon ET and will be broadcast nationally on ABC.

The Buckeyes are led on offense by quarterback Justin Fields and running back J.K. Dobbins. Fields, only a sophomore, has completed nearly 70 percent of his passes for 2,352 yards with a whopping 33-to-1 touchdown-to-interception ratio.

Dobbins, a junior, ranks second in the conference with 1,446 rushing yards and 15 touchdowns. He’ll be counted on by first-year coach Ryan Day to help lead the Buckeyes to victory Saturday.

I think it’s important in every game because you control the clock, you control the game when you can run the football,” Day told reporters earlier this week. “I thought we did that last week (in a 28-17 win over Penn State) other than the turnovers. If we don’t turn the ball over, we pretty much control that game. We ran the ball.”

On defense, Ohio State might have the best player in the nation in defensive end Chase Young. In just nine games this season, he’s posted 16.5 sacks to lead the top-ranked defense in the country, which has yielded just 217.4 yards per game. That’s more than 20 yards better than No. 2 Clemson.

Michigan’s defense isn’t a slouch, either, as it ranks fourth in the country in giving up 267 yards per game.

However, the Wolverines offense isn’t nearly as sharp as the Buckeyes, which comes in sixth nationally (530.4 yards per game). Michigan, meanwhile, is 69th and amasses nearly 403 yards per game.

Still, Michigan has hit its stride in winning four straight. The Wolverines have scored at least 38 in dispatching Notre Dame, Maryland, Michigan State, and Indiana.

Michigan is led by quarterback Shea Patterson who has thrown for 2,523 yards and competed near 59.5 percent of his passes.