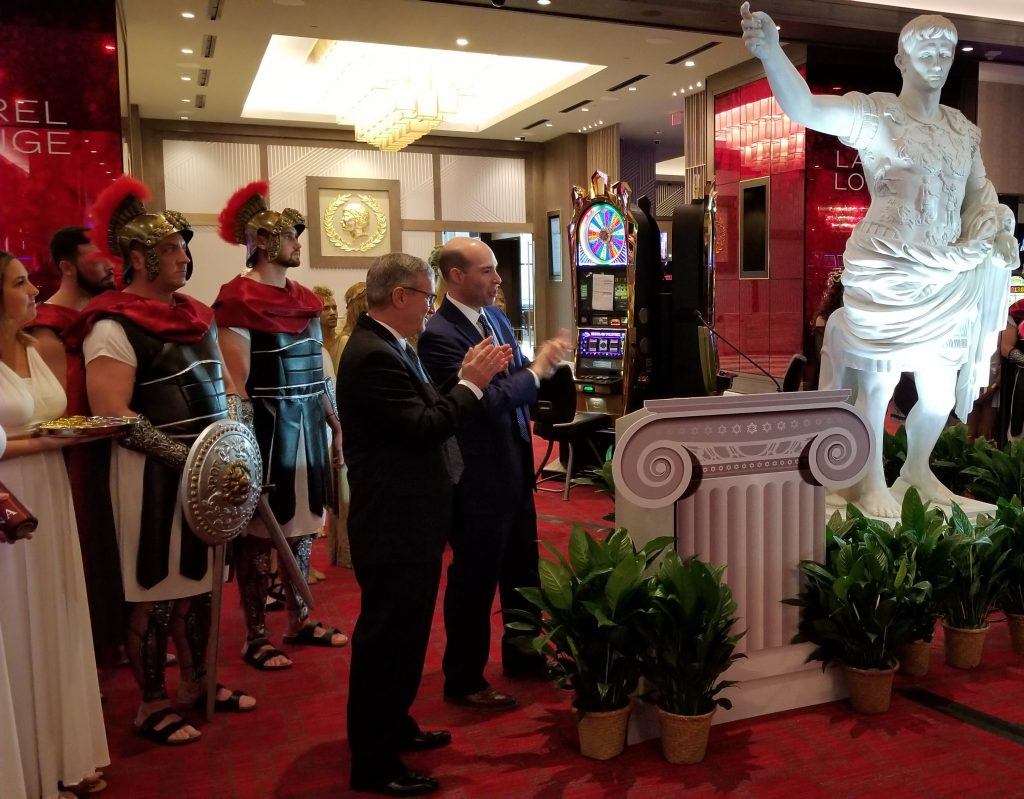 Caesars Entertainment CEO Tony Rodio (front) stands next to Brad Siegel, the general manager for Caesars Southern Indiana, as they celebrate the opening of the new $90 million land-based casino. Formerly known as Horseshoe Southern Indiana, the casino operated on a riverboat until last week. (Image: Casino.org)

The $90 million venue replaces the Glory of Rome riverboat casino that served the company for more than 20 years. Unlike the boat, which divided the gaming opportunities across smaller, stacked floors and kept nearly all the dining facilities across the street, the new casino spreads all of the slots and table games across a 110,000-square-foot area. The layout brings the games together with dining, entertainment, and retail options.

Tony Rodio, Caesars Entertainment’s CEO, said the new venue will provide a much better experience for guests. For starters, it’s a much shorter walk for patrons coming from either the on-site hotel or the parking garage. Now, customers will no longer need to trek across a skywalk to get to the boat. Instead, all of the amenities are just a few steps away from the garage.

It’s so much more spacious, so much more roomy. There’s so many more non-gaming amenities as far as restaurants and bars and the food hall,” Rodio said. “This is like a mini-Vegas experience compared to what the traditional, three-level riverboat offered. That’s night and day.”

The project took about 18 months to complete.

From Horseshoe to Caesars

The location wasn’t the only change. When the doors opened at noon Thursday ET, the new casino officially changed its name to Caesars Southern Indiana, switching from the Horseshoe brand also owned by Caesars.

The name change reflects how company officials view the southern Indiana market, which includes Louisville, Ky. across the river and such cities as Indianapolis, Cincinnati, and Nashville that are less than three hours away.

“Caesars is an iconic brand, internationally known, and that in itself is just one more appeal to come out here and experience what we’re now offering,” said Caesars Southern Indiana General Manager Brad Siegel.

Tom and Pat Koogler from Dayton, Ohio drove about two-and-a-half hours to attend the opening. While they will visit casinos across the country in their RV, including some closer to their southeastern Ohio home, they said that Caesars is the gold-standard for gaming.

“It’s definitely the way you’re treated,” Pat Koogler said. “There’s a definite difference with the Caesars organization, as opposed to some of the other ones. You always feel like you’re part of the family, and that makes you come back.”

Caesars investment also comes at a time as the company faces increased competition in the region. Across the river in Louisville, Churchill Downs Inc. plans to invest $300 million in building a hotel and 1,000-machine historical horse racing parlor (HHR) at its namesake track. Churchill Downs already has one HHR parlor at its former off-track betting facility, and the Louisville-based gaming giant stands poised to take advantage of sports betting if the Kentucky legislature approves it in the 2020 session that starts next month.

About the New Casino

Caesars Southern Indiana doesn’t necessarily feature more slots or table games. The 103 tables were already the most of any southern Indiana casino, and the 1,218 slots trailed only the Hollywood Lawrenceburg Casino near Cincinnati.

There are two bars, including one at the center of the casino and a lounge near the poker room that will host live entertainment on the weekends. The Piazza food hall will feature five restaurants, including Mexican, Asian, and a homestyle American dining options. There also will be a 24-hour burger joint.

Near the high-limit gaming area is the Laurel Lounge, which Caesars bills as an exclusive area for VIP patrons.

Construction on the casino started before Indiana legalized sports betting. However, Caesars officials still managed to make room for a sportsbook. The Book features more than 30 lounge chairs and 30 large televisions.