They say one man’s misfortune is another’s opportunity. Which is why an 11-story building in Dallas that’s currently afflicted with a 5-degree diagonal tilt was emblazoned with the logo of an Oklahoma casino this week. 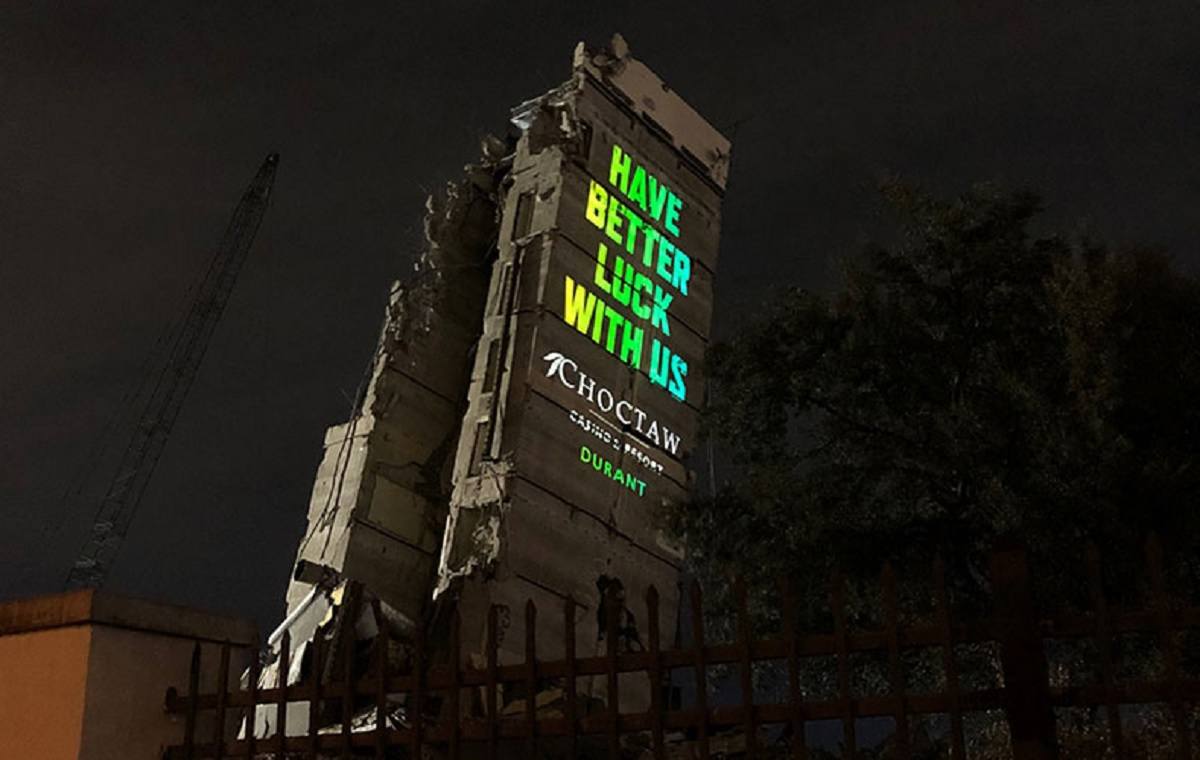 Once conceived, the Choctaw’s marketing company was in a race to organize the stunt before a wrecking ball could knock the building down. (Image: Choctaw Nation/The Richards Group)

“The Leaning Tower of Dallas” has become a social media sensation and accidental tourist attraction following its failed implosion on February 16.

Previously known as the Affiliated Computer Services building, it was due to be demolished to make way for a mixed-use development.

But the explosives only brought down part of the structure, leaving the core of the tower still standing — albeit askew.

Clips of the demolition fail immediately went viral, while the curious new landmark on the Dallas skyline hit the headlines across the US.

Meanwhile, 95 miles north of Dallas, in Oklahoma, the Choctaw Nation and its marketing people were plotting a way of – in marketing-speak – “inserting itself into the conversation.”

While some saw a doomed demolition project, the Choctaw saw a blank canvas. The result of which was a giant projection on the side of the tower on Tuesday night, with the headline “Have better luck with us,” directing people to visit the tribe’s Choctaw Casino & Resort.

“We knew when the building only came down halfway that it would become the target of the finest meme machines the internet has to offer,” explained Tim Eger, of the Richards Group, the Choctaw’s marketing firm, to industry web portal Muse by Clio.

“But everyone thought the building would be taken down fairly quickly. Until it wasn’t,” he added. “This thing wasn’t moving — they weren’t having any luck.”

The demolition team returned on Tuesday to finish the job, this time with a wrecking ball attached to a crane. The Richards Group was facing a race against time. But the tower was still proving lopsidedly persistent.

“Then we played the waiting game — everyone on pins and needles, wondering, with each hit of the wrecking ball, if the whole thing would finally tumble over,” Eger said. “Then came quitting time for the demolition crew, and we knew it was on.”

As of Friday morning, Dallas’ wonky miracle is still standing, but its days are numbered — as is the opportunity to pose for one of those perspective-trick photographs where you’re pretending to hold it up.

In the meantime, more than 1,600 people have signed an online petition calling for the Leaning Tower of Dallas to be declared a UNESCO World Heritage site so it can be preserved for future generations.

“Over the past few days, The Leaning Tower of Dallas has become the city’s largest cultural icon,” declares the petition’s organizers. “After making national headlines, we are finally famous for something other than the JFK Assassination … That’s why we need to work together now to save this landmark from destruction.

“If anything, do it for the memes,” they pled.