Churchill Downs Inc. (CDI) revealed further details Thursday regarding its plans for an onsite hotel and historical horse racing (HHR) parlor at its flagship racetrack in Louisville, Ky. In all, the company will spend $300 million on the two-year project. 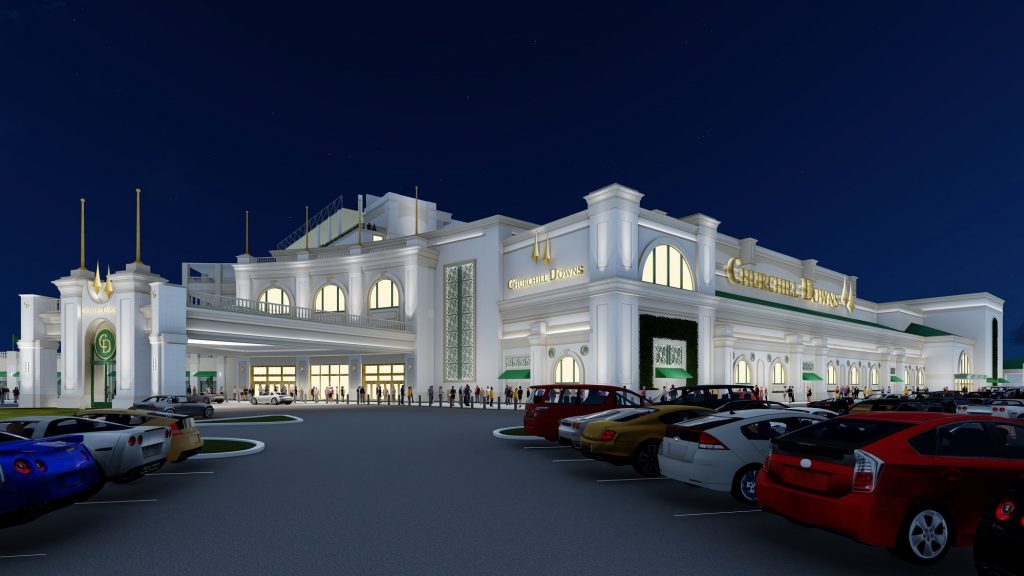 A rendering of the $300 million hotel and historical horse racing parlor Churchill Downs Inc. plans for its flagship track. Company officials expect to break ground in December and have all work completed within two years. (Image: Churchill Downs)

The cornerstone of the development will be a seven-story, 156-room hotel stationed along the first turn of the track. Rooms facing the track will have covered balconies allowing guests to watch the races from their room.

For the Kentucky Derby, visitors in the suites will have a chance to watch the horses break from the starting gate, round the first turn, and then watch them come down the stretch.

Derby Week guests can wake up to a sunrise view as horses breeze around the track and then have their Kentucky Derby in their suite,” said Kevin Flanery, a CDI senior vice president who also serves as president for the namesake track. “We took exceptional consideration with the design approach to this project to ensure that the addition will seamlessly enhance and complement the historic nature and iconic aesthetic of Churchill Downs.”

The hotel will be open year-round. It will also include a gaming floor with 900 HHR machines, a sports bar, and other dining options. In addition, the track will replace 3,300 temporary seats in the area, with a covered grandstand featuring 4,700 stadium-style seats.

The hotel and HHR parlor are expected to create up to 300 full-time jobs.

Work is expected to begin on the project in December.

Millionaire’s Row Gets a Facelift

The renovated area will include seating for up to 350 patrons. Upscale options available for guests who can afford the luxury view include concierge service to ensure dietary restrictions are met, premium bourbon tastings, and access to a handicapper.

Work on Millionaire’s Row will be finished in time for next year’s Derby, and Churchill Downs plans to release information about tickets later this year.

Earlier this month, CDI closed on the acquisition of Turfway Park, a track based in northern Kentucky near Cincinnati. At the time of the $46 million purchase, company officials said they planned to install 1,500 HHR machines in a $100 million rebuild of the track’s grandstand.

In a letter to the KHRC requesting the move, Flanery said the company will draw on its experiences running Derby City Gaming – Churchill’s off-track HHR parlor in Louisville – to create a “first-class” gambling and entertainment experience for customers. The additional machines also will generate revenue that will be funneled into purses for the track’s holiday and winter meets.

It’s an aggressive move by Churchill Downs in what is already a competitive gaming market around Cincinnati. The Ohio city has a full-fledged casino downtown and two racinos in the area. There’s also a Hollywood Casino in Lawrenceburg, Ind., that’s a short distance from both the Ohio and Kentucky state lines. Two other Indiana casinos, Belterra and Rising Star, are less than an hour away.