The 2019 college football season is officially over, as LSU dominated defending champion Clemson 42-25 in Monday’s College Football Playoff National Championship. But even before this season’s final game kicked off, oddsmakers were already looking ahead to next season. 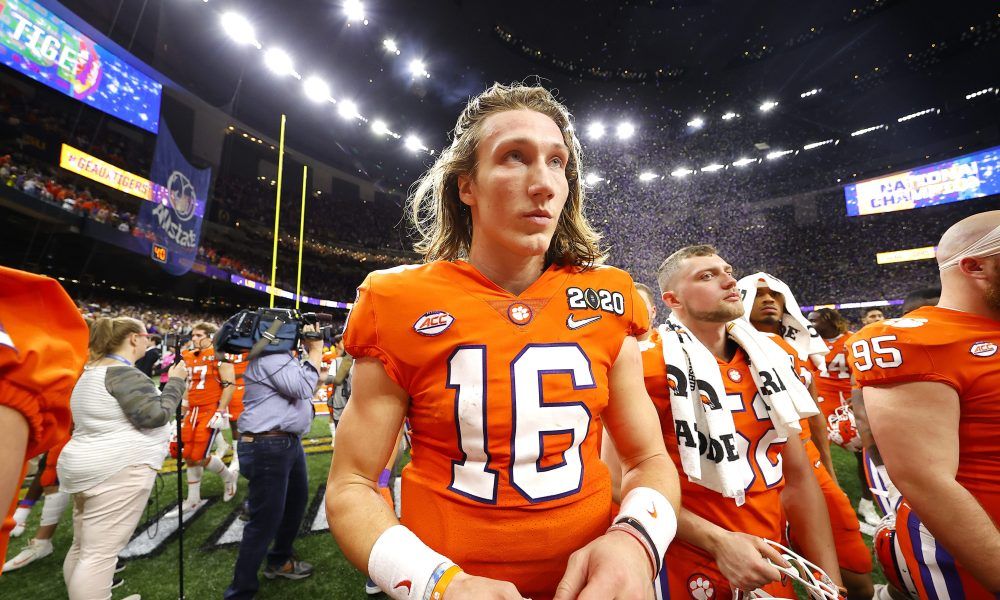 Trevor Lawrence (center) and his Clemson Tigers teammates walk off the field after LSU beat them for the CFP National Championship Monday night. Oddsmakers, though, expect Clemson to be back in the title game next year. (Image: USA Today)

And the usual suspects appear as the favorites.

Clemson may have lost for the first time in 30 games on Monday, but Dabo Swinney’s Tigers are the consensus top pick by sportsbooks to win the 2020 title.

FanDuel, PointsBet, and Caesars all list Clemson at +200 on their boards, meaning a $100 bet nets $200. The Westgate SuperBook offers the five-time defending ACC champions at +225, while DraftKings puts +250 odds on the Tigers, the same odds the sportsbook has on Ohio State.

Clemson is coming off its fifth straight CFP appearance and its fourth championship game in five years, but even with that legacy, Swinney’s team has 80 freshmen and sophomore among the 120 players in the program.

Most notably, the returning roster includes quarterback Trevor Lawrence, who has guided Clemson to the championship game in each of his first two seasons.

Still, Swinney knows even with the Tigers’ experience, it won’t be easy to make it to Hard Rock Stadium outside of Miami on Jan. 11, 2021.

It’s incredibly difficult to even get here, and super hard to win it, that’s for sure,” Swinney told reporters after Monday’s loss.

In addition to its ACC slate of games, Clemson’s schedule next year includes a home game against in-state rival South Carolina on Nov. 28, and a Nov. 7 visit to Notre Dame. The game against the Fighting Irish, a potential top 10 team next season, may be the Tigers toughest test. And if the ACC is as soft as it was this season, a single regular season loss could be enough for the CFP selection committee to bypass Clemson next season.

After Clemson, Ohio State is the second choice at FanDuel (+350), the SuperBook (+300), and PointsBet (+300). Led by quarterback Justin Fields, the Buckeyes will look to avenge their season-ending loss to the Tigers in this season’s CFP semifinal on Dec. 28

The second choice for Caesars is Alabama (+400), which missed the playoff for the first time this season. While Tua Tagovailoa has declared for the NFL Draft, coach Nick Saban will look to build around quarterback Mac Jones, who gained experience in the last weeks of the Crimson Tide’s season after Tagovailoa suffered a dislocated hip in mid-November.

LSU is also among the top teams on the futures boards, even though they will lose Heisman Trophy- winning quarterback Joe Burrow to graduation. The Tigers are DraftKings’ third choice at +600, and Caesars’ third choice at +450. However, other books aren’t as bullish on the champs. FanDuel offers them at +1400, and they’re at +1000 at PointsBet. The SuperBook offers them at +800

A third SEC team joins the Tigers and Bama at the top of the Futures boards. Georgia, which saw its playoff hopes dashed in a loss to LSU in the conference title game, are +800 at the SuperBook and DraftKings, +750 at PointsBet and FanDuel, and +1000 at Caesars.

Just as the books had a consensus with Clemson as their title favorite, they also have consensus in their Heisman Trophy favorite for next season with Buckeyes’ signal-caller Fields.

As a sophomore this past season, the transfer from Georgia completed 67.2 percent of his passes for 3,273 yards and had an amazing 41-to-3 touchdown-to-interception ratio. He also ran for 484 yards and 10 scores.

FanDuel offers the shortest odds on Fields at +175, with DraftKings and PointsBet listing him at +300 for the top individual award in college football.

Lawrence, who entered this season as a Heisman favorite along with Tagovailoa, is the second choice at those books. The junior-to-be has odds of +375 at PointsBet, +400 at DraftKings, and +550 at FanDuel.

Of course, keep in mind that early favorites aren’t always the ones who end up hoisting the Heisman in New York in December. Burrow started off at +20000, or 200-1, a year ago.