Clemson will look to claim its fifth straight ACC football championship on Saturday when the Tigers head to Charlotte and face the Virginia Cavaliers. 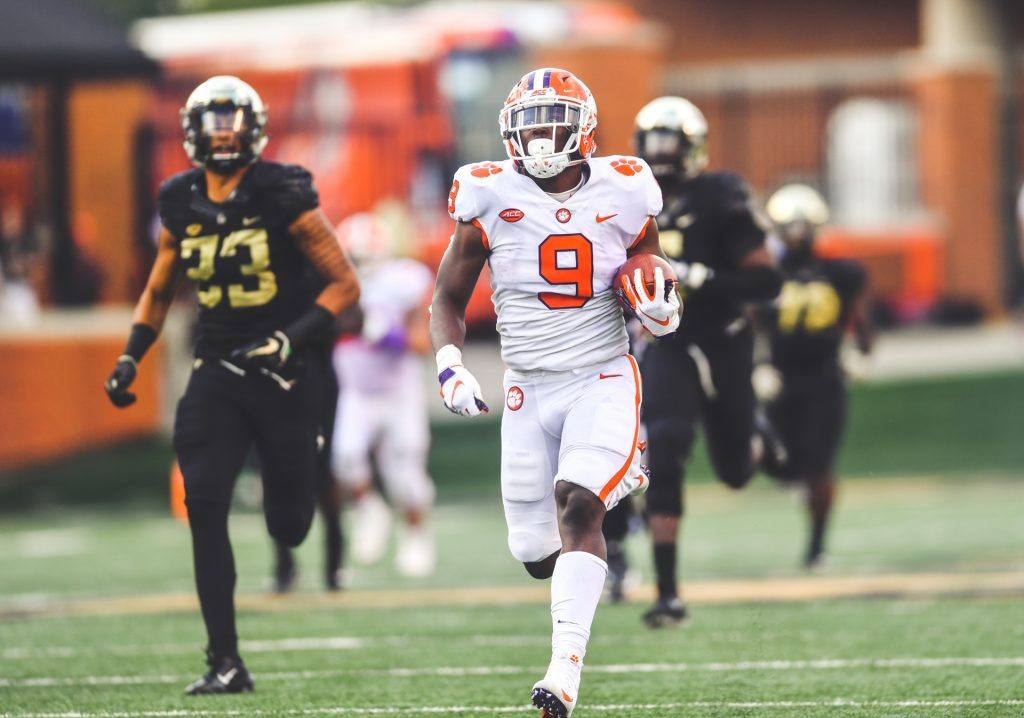 Running back Travis Etienne has helped Clemson run away from the rest of the ACC this season. In each conference game, the Tigers have been favored by at least 24 points. (Image: ClemsonTigers.com)

And oddsmakers once again expect the Tigers to not just win but to win rather convincingly.

The Tigers are 28.5-point favorites over the Cavaliers at most sportsbooks. It’s by far the largest spread in any of the title games this weekend.

It marks the sixth-straight contest the defending national champions have been favored by four touchdowns or more. In every game but one this season Clemson has been favored by 24 points or more (Texas A&M, 16.5-point spread).

While LSU and Ohio State have played tougher schedules and beaten ranked opponents to get into the national title discussion, Clemson – which was tabbed as a favorite the moment last season ended – did it by returning many of the key pieces from last year’s championship squad and taking care of business in the ACC. Quarterback Trevor Lawrence fell out of Heisman Trophy consideration relatively early, but still put up respectable numbers (2,870 yards, 30 TDs on 216-of-315 passing) while rarely playing much in fourth quarters of games. Running back Travis Etienne finished third in rushing yards with 1,386 and averaged a league-best 8.3 yards a carry.

People ask sometimes what’s the hardest thing about trying to repeat as a national champion, and my answer is ‘Well, it means we got to go 30-0…,’ That’s a hard thing to do,” Clemson coach Dabo Swinney said.

Only once all season did a team challenge Clemson. That came in a 21-20 win at North Carolina as the Tar Heels missed on a two-point conversion that would have given them the lead with 1:17 remaining.

Despite being heavy favorites all year, Clemson is 9-3 against the spread.

Bettors Willing to Give Points

While sportsbooks put a high number on the point spread, they still found some willing buyers. Over at oddsFire, FanDuel reported that two-thirds of the spread bettors gave the points. Clemson represents 68 percent of the money bet on the spread.

The numbers are similar over at DraftKings, where 70 percent of the bettors are giving the 28.5 points. That equates to 69 percent of the money bet on the spread.

William Hill lists the over/under at 57, and 88 percent of its bettors are backing the over. That represents 86 percent of the handle on the total.

The moneyline odds on Clemson are as high as -6000 at William Hill and Caesars. That’s an implied probability of nearly 98.4 percent.

Cavaliers coach Bronco Mendenhall told reporters this week that his team relishes the opportunity it must play for the conference title, but he understands that for his team to notch an epic upset, they need to send a statement early.

“Starting fast, having some success to begin the game certainly makes those kinds of statements,” he said. “Not only to the opponent, but to our own team.”

That start would likely come from quarterback Bryce Perkins, the spark plug on offense. The Virginia senior led the ACC in total offense this season with 3,636 yards of total offense. His 2,949 passing yards were second best in the league, while he also ranked 13th in the conference with 687 yards rushing.

“He’s one of those guys that makes everybody around him better,” Swinney said. “That doesn’t just happen. He’s got the total respect of everyone. Kind of as he goes, they go.”