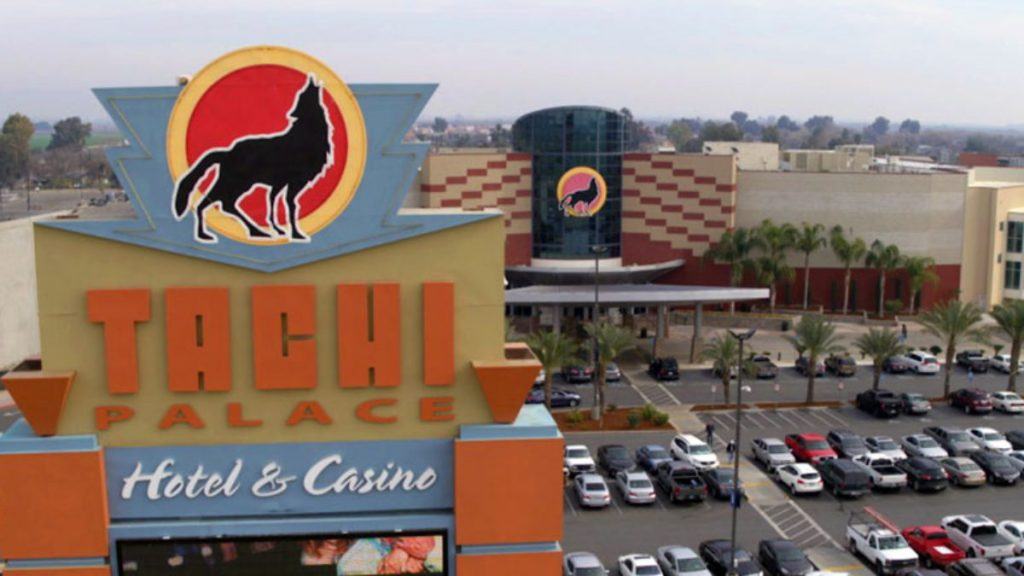 The Tachi Palace Casino Resort in central California is scheduled, according to a report, to host UFC 249 next week/(Image: Tachi Palace)

The Tachi Palace Casino Resort in Lemoore, located about 40 minutes due south of Fresno, will host the pay-per-view event. Because the casino is on land sovereign to the Tachi-Yokut Tribe, it will not require sanctioning by the California State Athletic Commission (CSAC), which regulates fighting sports in the state.

Last week, the commission announced the cancellation because of Gov. Gavin Newsom’s stay-home order and guidance from the California Department of Public Health on containing the spread of the novel coronavirus.

The Commission didn’t take this decision lightly and understands the potential economic loss to promoters and the industry of combative sports,” the CSAC statement read. “We had to weigh the best interest of our fighters and the community around us.”

The 12-fight card will take place at a site where the tribe has shut down its casino and seven-story hotel since March 20. The onsite hotel is not taking reservations for any date earlier than June 1.

Like other tribal casinos, which tried to stay open longer than their state-regulated commercial brethren, the Tachi Palace tried to stay open by increasing the number of antibacterial stations, closing its bingo hall and table games, and operating fewer slots to promote proper social distancing.

“While dedicating these additional resources in response to COVID-19 has been impactful, it is now clear that a more extensive action is necessary for the well-being of all,” said Tribal Council Chairman Leo Sisco in a statement. “We will continue to closely track every new development related to the pandemic.”

Fights On, Despite Warning by Doctors

For starters, the event was supposed to be held at the Barclay’s Center in Brooklyn. However, New York Gov. Andrew Cuomo’s order closing non-essential businesses forced White to look elsewhere. Other states, including Nevada, also would not work out because their commissions refused to sanction bouts, even if, like UFC 249, no fans would be allowed entry.

At one point, there was even a discussion about holding the matches somewhere in the Middle East

While White has pressed on to hold this – and potentially other UFC events in the near future – the Association of Ringside Physicians has urged all combat sports to follow guidelines set by the US Centers for Disease Control and Prevention and postpone their events indefinitely.

“Any combat sport taking place during this global pandemic places the athletes, officials, and anyone else involved in the event under unnecessary risk of infection and transmission of COVID-19,” the statement read. “In addition, combat sports athletes often require medical attention after a bout, and we do not wish to see any additional strain on an already overwhelmed medical system.”

Odds on Ferguson Getting Shorter

Earlier this week, White announced the card’s main bout would be changed because of concerns regarding global travel restrictions.

UFC lightweight champion Khabib Nurmagomedov was to defend his title against Tony Ferguson. However, there have been concerns about the Russian champ being able to leave his native country in time for the fight.

As such, White went ahead Monday and announced the UFC 249 main event would now feature Ferguson, the top contender in the lightweight division, and Justin Gaethje, the fourth-ranked contender.

On Monday, Ferguson was listed as the favorite at FanDuel with -152 odds, compared to +130 for Gaethje. By late Tuesday night, Ferguson is down to -194, with Gaethje now at +164.