The No. 12 Wisconsin Badgers (9-2) will come into their Week 14 rivalry game against the No. 8 Minnesota Golden Gophers (10-1) as a 2.5-point favorite, according to FanDuel Sportsbook. 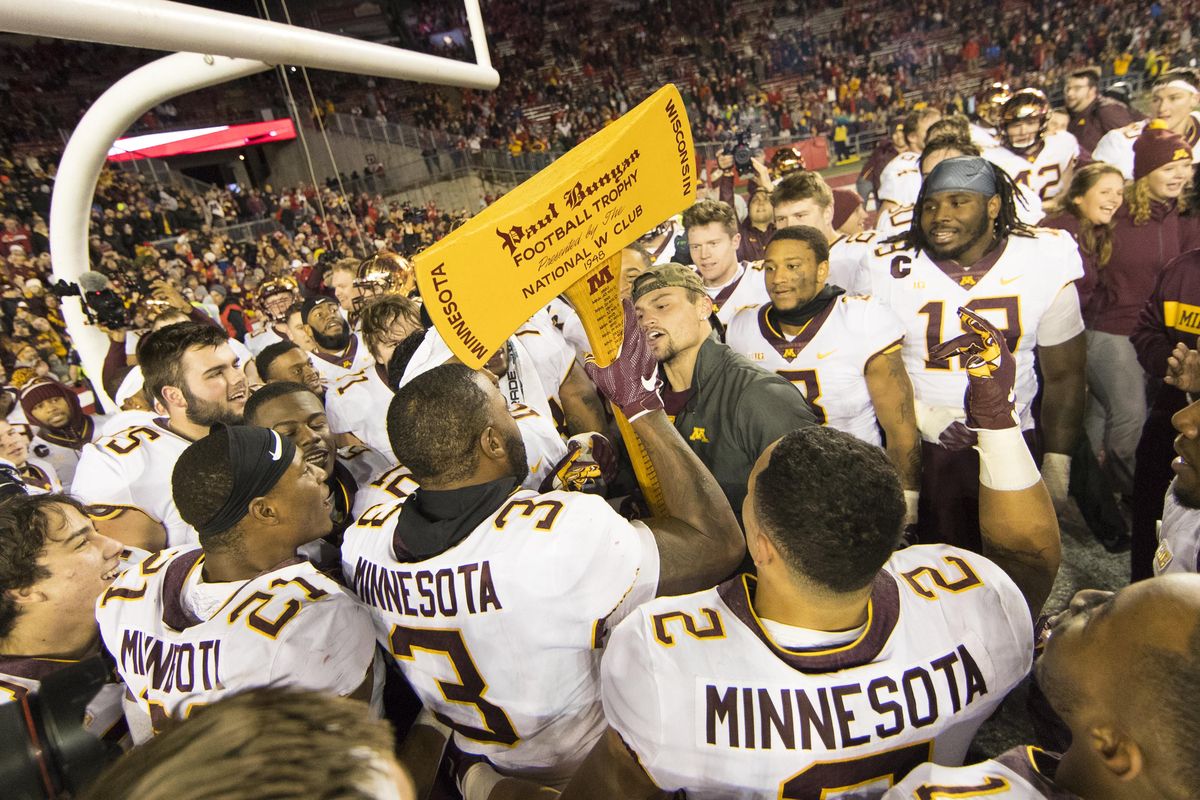 Minnesota will look to win Paul Bunyan’s Axe for a second consecutive year when it takes on Wisconsin this Saturday. (Image: Jeff Hanisch/USA Today Sports)

The game is critical for both sides: not only are they playing for Paul Bunyan’s Axe, but the winner will move on to play Ohio State in the Big Ten championship game next weekend.

Wisconsin and Minnesota have played 128 times in their history, and are remarkably tied 60-60-8 all-time. But in recent years, the Badgers have been dominant over their border rivals, winning the Axe 14 times in a row before the Gophers finally broke through last season with a 37-15 win.

This year’s matchup has further intensified in importance, especially for Minnesota. The Golden Gophers have won seven conference games for the first time in program history, and has the chance to win their first Big Ten West title ever. That means that Minnesota has rarely been tested like they will on Saturday, but head coach PJ Fleck thinks his squad is ready for the challenge.

We haven’t had that moment in a long time here,” Fleck told reporters. “But that doesn’t mean they aren’t ready for that moment.”

Wisconsin has battled back from an early loss against Illinois, and managed to get back into the divisional race when Minnesota suffered its only loss of the year at Iowa two weeks ago. While the Badgers acknowledge that Minnesota is having a special year, they still believe they can pose new challenges for the Golden Gophers defense.

“They’ve come ready and have performed very well against the teams we’ve seen,” Wisconsin center Tyler Biadasz told The Daily Cardinal. “We have to attack them. I don’t think they’ve been tested like we can test them. We’ll be ready for them.”

Another rivalry game will be taking place in the Big 12, where No. 7 Oklahoma (10-1) will visit No. 21 Oklahoma State (8-3) in the latest edition of the Bedlam series. Oklahoma comes in as a 13-point favorite, but the Sooners will have to be on guard, as the Cowboys would like nothing more than to derail Oklahoma’s remaining chances at reaching the College Football Playoff.

They have a really good scheme and they play well,” Oklahoma quarterback Jalen Hurts told reporters of the Cowboys’ defense, which has forced 10 turnovers over the past four weeks. “They have really good players. They get to the ball fast and they play the ball well.”

Also on the menu for Saturday is a clash between Texas A&M (7-4) and No. 2 LSU (11-0). The Tigers are a clear and obvious 17-point favorite at home, but the Aggies have always been able to test – if not beat – the top teams in the SEC, so this is a game that LSU can’t look past on its way to next weekend’s conference title game.