Indiana reported its March gaming figures on Thursday, and revenues plummeted, as expected thanks to the COVID-19 outbreak forcing the closure of the state-licensed casinos for the last half of the month. 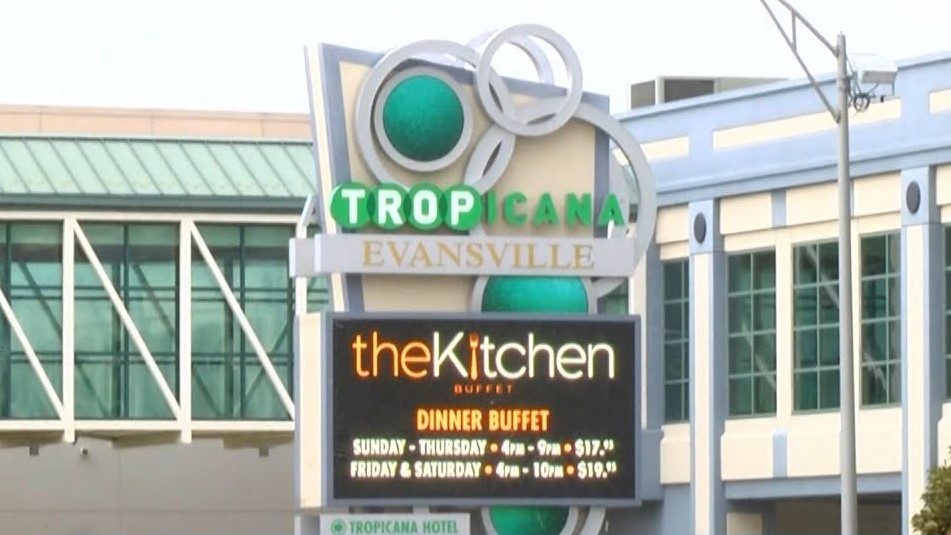 The Tropicana Evansville casino generates about $1 million in revenue monthly for the Indiana town. City officials have already passed budget cuts to deal with the casino’s closure due to the COVID-19 crisis. (Image: 14News,com)

The 12 state-licensed casinos and racinos generated just $90.6 million in adjusted gross revenue (AGR) for the month and turned over slightly less than $28.4 million in casino wagering and supplemental taxes, according to information from the Indiana Gaming Commission (IGC).

With the exception of some online sports betting, gaming was stopped in Indiana when the state ordered all casinos to close on March 16.

The state is already starting to see the effects of the closures. At Friday’s state COVID-19 briefing, Office of Management and Budget Director Cris Johnston noted the state’s general fund revenues missed projections by $70 million, or 6 percent.

Wagering taxes accounted for $13.5 million of that shortfall, and Johnston called that “a significant factor.”

The budget director noted that the budget issues will get worse before they get better, especially as April will show zero casino taxes and business and personal income taxes deferred for up to three months. April and June are typically the highest income months for the state.

“We do know that the dissent will be steep and rapid,” Johnston said. “What we don’t know for sure is what the pace of the recovery will be.”

The casino closures due to COVID-19 aren’t just impacting state coffers. They’re also causing communities home to the attractions to look at their budgets and begin making decisions as both direct revenue from the casinos as well as employment taxes they generate are lost.

Evansville, Ind. is home to a Tropicana riverboat casino. The Ohio River town of about 118,000 is Indiana’s third-largest city, and the Trop delivers about $1 million a month in revenue to the city budget.

Just two weeks after the casino’s March 16 closure started, the Evansville City Council approved its first budget reduction, Mayor Lloyd Winnecke told reporters during a state briefing earlier this week the casino closure will be a big hit to the state’s budget.

The council has approved a $2.8 million repeal to our 2020 capital budget,” Winnecke said. “We are planning for more and hoping for no more, but (casino closures are) a real budget impact to municipalities across the world.”

When the council made its move, city officials expected the Tropicana to stay closed for about two months. However, when Tropicana owner Eldorado Resorts filed paperwork with the US Securities and Exchange Commission earlier this week regarding employee furloughs, it did not give an estimated time for reopening its properties. Instead, it mentioned that it planned to pay health insurance premiums for furloughed workers potentially through June 30.

The first March for Indiana’s sportsbooks was historic but for the wrong reasons.

Not being able to take action on the NCAA Tournament in a college basketball-mad market cost the sportsbooks – and the state – significantly. The tournament was one of several sporting events or leagues that were either canceled or put on hiatus due to the COVID-19 outbreak, and that kept Indiana from seeing its monthly betting handle increase yet again.

Indiana’s sports betting handle for March was $74.8 million, a drop of more than $112 million from February’s total amount wagered. With only a couple weeks’ worth of events, if that, available to the sportsbooks, the state posted its smallest handle since last September, which was the first month for sports betting.

Revenues fell by nearly 50 percent to $5.5 million, giving the state just $522,085 in tax revenue. That’s the least Indiana has received for a month, though that mark will be broken in a nearly sports-free April.

Until March, Indiana had positioned itself as the No. 4 sports betting market in the nation, with a handle behind only Pennsylvania, New Jersey, and Nevada. When gaming resumes, the Hoosier State will neighbors Illinois and Michigan operating sportsbooks as well. While neither state will have online sports betting initially, the retail sportsbooks in those states still may put take a chunk of what Indiana was getting,