The show will not go on. In a Thursday interview with ESPN, UFC President Dana White said he canceled UFC 249 after officials from the network asked him to stop the pay-per-view event scheduled for April 18. 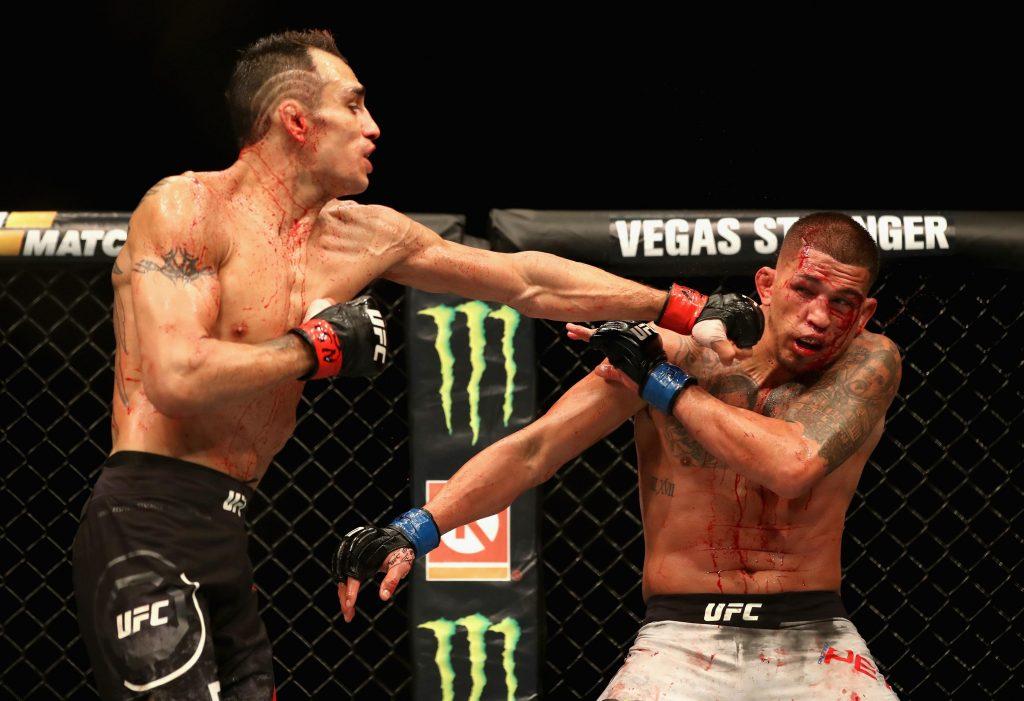 Tony Ferguson, left, fights Anthony Pettis in a 2018 UFC bout. Ferguson was supposed to fight in the main event for UFC 249, scheduled for April 18, but UFC President Dana White announced the card had been canceled after broadcast partner ESPN expressed concern about holding fights during the COVID-19 pandemic. The picture explains why that might be a prudent choice. (Image: UFC.com/Getty Images)

While sporting leagues and organizations have canceled or postponed events for nearly a month because of the coronavirus pandemic, White remained insistent the fight card would still take place. After the original venue, the Barclays Center in Brooklyn, was ruled out, White looked for another venue both in the US and abroad. Earlier this week, he ultimately settled on the Tachi Palace Casino Resort, a tribal casino in Lemoore, Calif.

The original headline bout – Khabib Nurmagomedov vs. Tony Ferguson – was canceled after Nurmagomedov, the UFC lightweight champion, could not leave his native Russia due to international travel concerns during the global COVID-19 outbreak. Justin Gaethje eventually replaced Nurmagomedov on the card.

Then on Thursday, Rose Namajunas bowed out of her UFC 249 fight against Jessica Andrade. Her manager posted on social media that the American fighter lost two family members to COVID-19.

Later in the day, White said he took a call from “the highest level you can go” at ESPN and The Walt Disney Company. Disney owns the sports network that serves as UFC’s broadcast rights holder.

While the organization was fully prepared to proceed with UFC 249, ESPN has requested the postponement of the event and subsequent bouts until further notice in light of the COVID-19 pandemic,” UFC said in a statement after White’s ESPN interview. “UFC looks forward to resuming the full live events schedule as soon as possible.”

White told ESPN he would take care of the fighters scheduled to compete. UFC employees also would not face any layoffs.

Many questioned whether the UFC fights should take place because of the coronavirus pandemic. However, sportsbooks in dire need of a major sporting event could have used the event to tide them over while waiting on other major sports to resume.

White initially settled on Tachi Palace because, as a sovereign tribal location, it could host the card despite the stay-at-home order issued last month by Gov. Gavin Newsom that forced numerous non-essential businesses to close.

However, even the tribal casino itself closed, with the phone greeting informing callers that the closure is due to the state’s order. And on Thursday, the New York Times reported that a 1953 federal law that gave California and five other states jurisdiction over crimes that took place on sovereign tribal land.

The Times reported that Newsom placed a call Disney leaders, who then contacted White.

Neither Newsom’s office nor ESPN responded to Casino.org requests for comment placed prior to the Times report.

Earlier in the day, US Sen. Dianne Feinstein (D-Calif.) urged all parties to cancel the event. In a statement, she noted that holding the fights would tie up precious medical resources during a pandemic. She also felt it sent a message that anyone could disregard pandemic orders and potentially allow the virus to spread.

“I’m pleased that UFC and the Tachi-Yokut Tribe canceled the upcoming event at the Tachi Palace Casino Resort,” Feinstein said in a statement after White’s announcement. “Now is the time to be particularly vigilant as we continue to fight this deadly virus.”

White did not give a timeframe for when fights would resume. However, he told ESPN that UFC would become the first sporting organization to return after the COVID-19 outbreak subsides.

That’s not to say, though, he’s still not working on ways to make fights happen. That includes working on a private island to hold fights involving the circuit’s international combatants.

“Fight Island is real!” he told ESPN. “It’s a real thing. The infrastructure’s being built right now, and that’s really going to happen. It will be on ESPN.”

The island had been a rumored location for UFC 249.

White also thanked Tachi Palace officials for sticking with the organization. He promised to bring a major event to the casino 40 miles south of Fresno as a reward.