The Road to Kentucky Derby 146 goes back through Hallandale Beach, Fla., on Saturday for the running of the Grade II Fountain of Youth Stakes at Gulfstream Park. The race marks the 3-year-old debut for one of the most talked about Derby prospects in this year’s class. 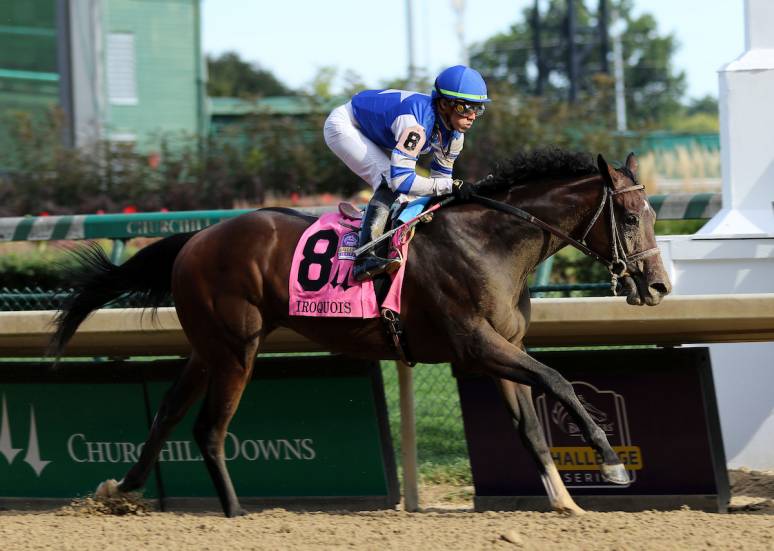 Dennis’ Moment will make his 3-year-old debut at Gulfstream Park on Saturday in the Fountain of Youth Stakes. (Image: Eclipse Sportswire)

Dennis’ Moment is the 2-1 morning-line favorite in a field of 10 for Saturday’s race. In four races last year, he won twice, including the Grade III Iroquois Stakes at Churchill Downs, the first official Kentucky Derby qualifying points race. However, it’s his performance in his first win that generated the buzz around the Dale Romans-trained colt.

On July 27 at Ellis Park, Dennis’ Moment seized the moment, going wire-to-wire and pulling away to a stunning 19-1/2-length victory. The Equibase racing chart said it best: “Demolished field.”

But it’s been hit or miss with the colt as awful starts have cost him dearly in his other two races. In his debut race at Churchill Downs last June, another horse bumped into Dennis’ Moment at the start and that prompted him to toss his jockey and get disqualified.

He also ran in the Grade I Breeders’ Cup Juvenile in November, but as the 4-5 favorite, he stumbled out of the gate and never recovered to finish last in the race.

While it’s been almost four months since his last race, you can make the argument that the colt hasn’t raced since the Iroquois win more than five months ago. So it’ll be interesting to see what kind of performance he can produce.

Saturday’s race will also mark the first time jockey Flavien Prat will ride Dennis’ Moment, who will break from the fifth gate.

Dennis Not the ‘Underdog’

Romans typically tries to avoid hyping his horses, but he makes an exception for his Kentucky Derby contender.

I usually like being the underdog because there’s not much pressure,” Romans said. “With this horse, there’s so much hype with him – well deserved, he’s very talented. I put the pressure on myself because of what I think of him. I think he’s ready to roll.”

While the Fountain of Youth field is deep, it’s more quantity over quality. Still, there are a few challengers to Dennis’ Moment who are making their graded stakes debut.

As Seen On Tv is coming off of the Mucho Macho Man Stakes at Gulfstream on Jan. 4. In that mile race, the Kelly Breen-trained colt dueled down the final quarter-mile with Chance It, with the latter horse finally winning by a head.

As Seen On Tv, trained by Kelly Breen and ridden by Paco Lopez, is at 9-2 and starts from the sixth gate.

Chance It had been scheduled to run and break from the far outside gate. However, trainer Saffie Joseph Jr. announced early Saturday afternoon he’s pulling his colt from the Fountain of Youth. The plan now is to run him in next week’s Tampa Bay Derby instead.

Two other entries have graded stakes experience and could be value picks if their odds remain high.

Shotski is coming down from Aqueduct, where he won the Grade II Remsen Stakes in December and finished second in the Grade III Withers four weeks ago. Shotski led up until the stretch in the Withers, but he faded in the 1-1/8-mile race. The Fountain of Youth is a sixteenth shorter, so it might work in the Jeremiah O’Dwyer-trained colt’s favor.

Ridden by John Velazquez, Shotski will start from the 10th gate with odds of 10-1. Like Dennis’ Moment, Shotski will race carrying 124 pounds, the heaviest weight in the race. Chance It and As Seen On Tv will race two pounds lighter.

Racing at 120 pounds is Ete Indien. Trained by Patrick Biancone and ridden by Florent Geroux, Ete Indien is coming off a second place showing in the Holy Bull to Tiz the Law on Feb. 1 at Gulfstream. He led early in the race but gave way to one of the top Kentucky Derby contenders down the stretch. He did, however, finish 11-1/2-lengths ahead of the third-place finisher.

Ete Indien will break from the 11th gate and has odds of 8-1.

The winner of Saturday’s race will earn 50 points toward the Kentucky Derby. That was more than enough points to gain entry into the Run for the Roses last year and should be the case this year. The horse finishing second will earn 20 points, which will certainly help their cause and likely position that horse to run in a late March or early April final prep race.

Post time for the race is scheduled for 6:04 pm ET and will air on Fox Sports 2. Information on the full field is available at Equibase.