Alabama quarterback Tua Tagovailoa announced on Monday that he will forego his senior season and become eligible for this year’s NFL Draft. He makes the move to go pro despite suffering a hip dislocation in November that prematurely ended his time with the Crimson Tide. 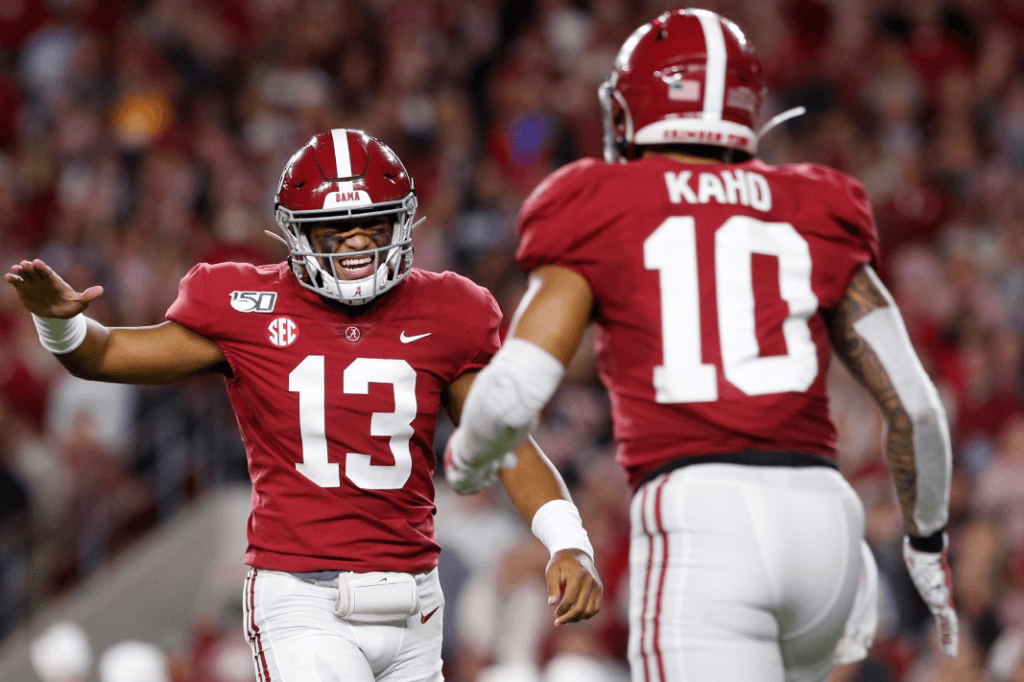 Alabama quarterback Tua Tagovailoa (left) announced on Monday he would forego his senior season with the Crimson Tide to enter the NFL Draft in April. He did that despite suffering a hip injury that could keep him from being a high pick. (Image: Crimson Tide Photos)

Tagovailoa told reporters Monday that he’s entering the draft despite not knowing just how long he’ll need to recover from the injury he sustained against Mississippi State on Nov. 16.

I don’t think that any of the doctors can tell the foreseeable future. None of the guys rehabbing me can tell that,” he said. “From what they’ve seen in New York, everything looks good. But you can’t really tell until the three-month mark or the four-month mark.”

The deadline for underclassmen to enter the NFL Draft is Jan. 20.

The quarterback burst on the scene as a freshman coming off the bench in the College Football Playoff (CFP) National Championship Game to rally Bama from a 13-0 deficit to win the title in overtime. He became the starter last season and guided them back to the title game before losing to Clemson.

Tagovailoa started the season along with Clemson quarterback Trevor Lawrence as the favorites for the Heisman Trophy. However, even though he had thrown for 2,840 yards and enjoyed a 33-to-3 touchdown-to-interception ratio, his Heisman stock fell even before his injury as LSU signal caller and eventual winner Joe Burrow emerged on the scene.

The uncertainty about Tagovailoa’s prognosis does make projecting his NFL stock a riskier endeavor. He told reporters Monday that some are considering his hip injury like a knee injury. How the hip heals will be critical as talent evaluators consider if Tagovailoa can be a mobile quarterback in the NFL.

While Tagovailoa certainly has the arm strength to play quarterback, he’s listed at 6-1 at Alabama, and it remains to be seen what his height will be in NFL evaluations. That’s about two inches shorter than the average quarterback. If his ability to scramble becomes limited as a result of the injury, then he could face a long slide in the draft.

Most sportsbooks have odds for just the top pick in the April draft posted right now. Tagovailoa is listed at +1600 at DraftKings and +1200 at FanDuel. He’s the third choice at both.

PointsBet also lists Tagovailoa as the third choice at +1600. But after he made his announcement, the sportsbook available in New Jersey and Iowa posted an over/under on his selection.

Some mock drafts already have Tagovailoa going fifth in the draft, a spot held by the Miami Dolphins.

Not only did Burrow win the Heisman, the senior LSU quarterback also established himself as the heavy favorite to be the top pick in the draft.

It seems almost certain the Cincinnati Bengals will take Burrow with the number one pick. However, Burrow does have one game left – this year’s CFP National Championship against defending champion Clemson.