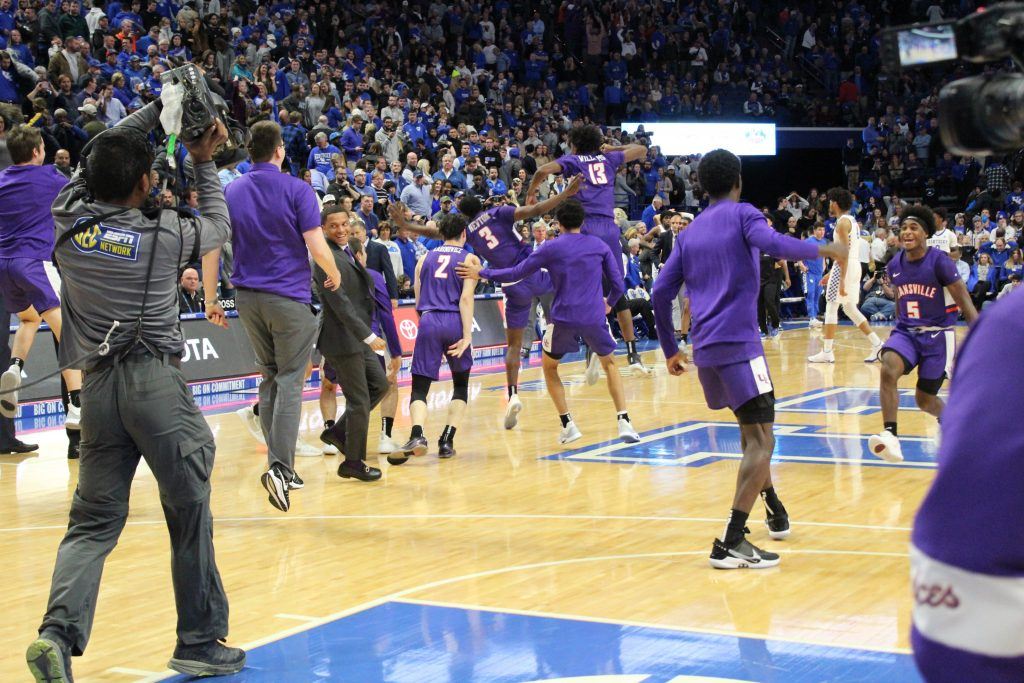 Players from Evansville celebrate on the Rupp Arena court after the Purple Aces upset top-ranked Kentucky Tuesday. Kentucky was a heavy favorite, with sportsbooks offering as much as a 25-point spread in the game. (Image: University of Evansville Athletics)

The Purple Aces traveled to Rupp Arena to face the Wildcats, the top-ranked team in the nation according to both the coaches’ and writers’ polls. Coached by former UK star Walter McCarty, Evansville came into the game ranked eighth – out of 10 teams in the Missouri Valley Conference preseason poll.

With a matchup like that, the host Wildcats entered the contest as a 24.5-point favorite at PointsBet and DraftKings and a 25-point favorite at other sportsbooks, such as FanDuel. However, it was the Aces who stunned the Wildcat faithful and the rest of the country with their 67-64.

I don’t know if anything matches this other than winning a national championship from a basketball standpoint,” said McCarty, who won a title with the Cats back in 1996. “It’s awesome to be able to come in here and play on this type of stage and my guys. I have a good group of guys. They love each other and they’re really connected. And this group to come in here and be able to do that is just awesome.  It does not get any better than that.”

Just how rare is a win like this? It marked the first time a No. 1 team lost at home to an unranked team from a mid-major conference since Long Beach State shocked Kansas on Jan. 25, 1993.

According to TeamRankings.com, Evansville’s victory ranks as one of the most shocking upsets in recent memory.

Since 2003, there have been 105 games featuring a 25-point spread. Only three times have underdogs ended up winning those games outright.

Usually in games with that large a spread oddsmakers will not even post moneyline odds since the chances of the underdog pulling off the stunning upset are typically slim. However, the South Point sportsbook in Las Vegas offered 40-1 odds on the Aces against the Wildcats.

Oddsmakers Not Budging (Much) on Wildcats

The one thing that makes college basketball different from college football is that a bad regular season loss, like the one Kentucky suffered Tuesday, won’t affect their postseason chances.

Note the singular noun loss in that last sentence.

Oddsmakers are choosing the former for the Wildcats.

A day after the loss, Kentucky’s title odds are +700 at William Hill sportsbooks. That means a winning $100 bet would net $700. Those are the same odds bettors would have received on the Wildcats from the sportsbook last month.

Last Monday, a day before Kentucky beat then-No. 1 Michigan State, the Wildcats had +800 odds at DraftKings to win the national title. On Wednesday, less than 24 hours after losing to Evansville, UK’s odds were +700.

Over at FanDuel, Kentucky’s odds are at +800, slightly longer than +750 odds they received a month ago.