It was a moment for US sports betting history that may be its equivalent to the Bush-Gore presidential election of 2000. On Tuesday, West Virginia seemed to become the first US state to allow wagering on political elections, only to pull back moments later after state officials said they needed to review the matter. 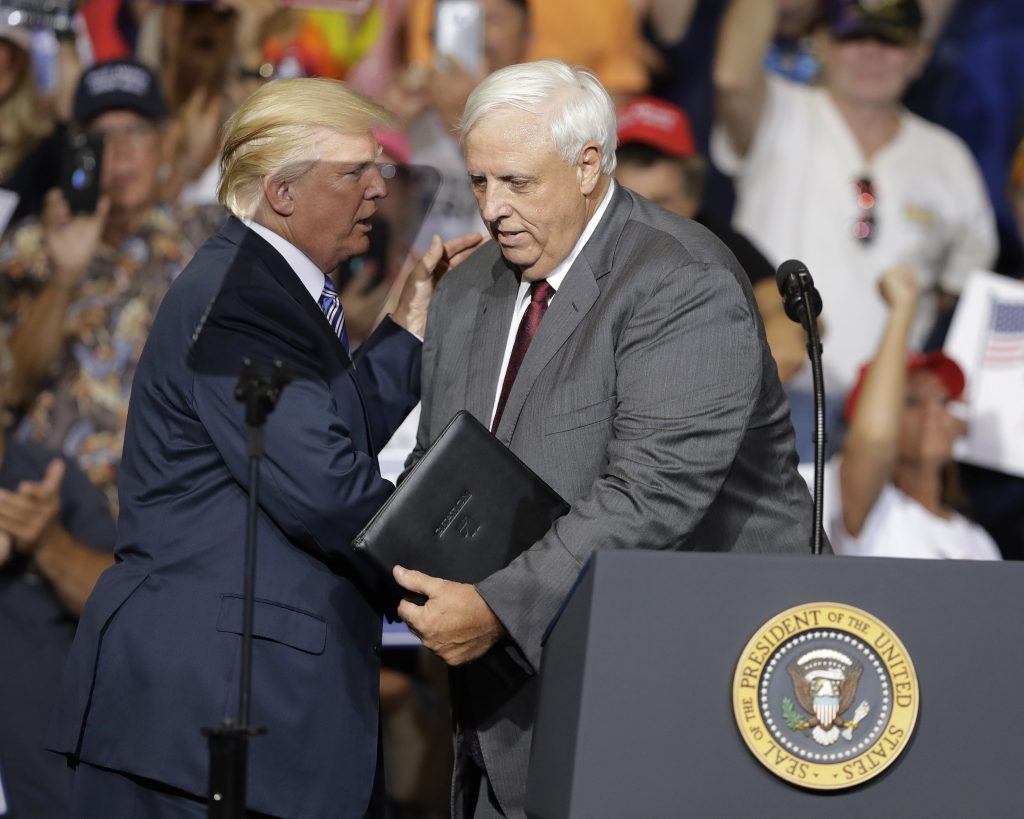 President Donald Trump (left) embraces West Virginia Gov. Jim Justice at a 2017 rally in the state. Bettors in West Virginia may soon get the clearance to bet on this year’s presidential election. (Image: Darron Cummings/Associated Press)

For a few minutes Tuesday night, West Virginia bettors on FanDuel’s sportsbook had a chance to get President Trump at -110 odds for the Nov. 3 general presidential election, or former Vice President and presumptive Democratic nominee Joe Biden at +125. However, the odds were taken down shortly thereafter.

After FanDuel initially released a statement saying it was excited to be the first to offer the betting opportunity, it released a subsequent statement about two hours later.

While the markets were approved, the West Virginia Lottery has asked FanDuel to refrain from offering the markets until they have time to fully work through the implications of this new market offering,” the company said.

When exactly the political betting markets may return remains to be seen.

A FanDuel spokesperson told Casino.org the odds were posted long enough that at least one bet was made. However, that wager has since been refunded.

Political Betting Lucrative, But Not All States on Board

Political betting, while popular in Europe, has yet to be embraced in the States, with the exception of trading market PredictIt.

Still, sportsbooks, especially FanDuel and its main online rival, DraftKings, have made it clear they would like to offer it to American bettors. DraftKings Director of Sportsbook Operations Johnny Avello told Casino.org in an interview earlier this year he would make it a “pick ‘em” bet that states allowed political betting by the 2024 race.

The length of the presidential campaign, with primaries starting nine months ahead of the general, plus the potential volatility as candidates’ chances rise and fall, would make it an intriguing and lucrative market, he said.

As sports betting has expanded in the post-PASPA environment, some states give their gaming commissions the authority to allow betting on markets other than sports. New Jersey and Indiana, for example, offered action on the Academy Awards, which was held a week after the Super Bowl.

“The IGC is not interested in approving wagers on elections at this time,” she added.

A message to the New Jersey Division of Gaming Enforcement was not returned Tuesday evening.

Other states, including Nevada, Iowa, and New Hampshire, would require their legislatures to either amend their current laws or enact new ones to allow books to accept wagers on elections.

Sports betting Twitter took turns between being elated that a state finally jumped into the political waters to being concerned that it might encourage federal oversight into sports betting.

There was also some discussion whether West Virginia’s law would allow betting on elections. However, one state lawmaker, and one of the state’s most ardent supporters of sports betting, said that offering political betting could help the state’s sportsbooks draw people from places like Pennsylvania and Washington, DC.

“I believe the language of our legislation allows for it, and I was hoping we would offer it before New Jersey,” state Del. Shawn Fluharty (D-Wheeling) said in a text message to Casino.org. “Regardless of whether it goes live now or not, that’s clearly the direction the market is trending. And (American elections are) certainly already being bet on illegally in the US and legally in Europe.”

FanDuel is one of three online sportsbooks licensed in West Virginia, along with DraftKings and BetMGM. The Hollywood Casino at Charles Town Races has its own retail sportsbook, and Mountaineer Park (William Hill) and Wheeling Island and Mardi Gras casinos (Betly) have brick-and-mortar establishments as well.

The retail venues, however, are currently closed by the COVID-19 outbreak.

In a statement to Casino.org, Matt Kalish, DraftKings president of North American operations, said the company was “excited” about the potential to offer odds on political races.

However, he added, “We are taking the time to ensure we evaluate the opportunity thoroughly before posting any lines.”