FanDuel announced on Wednesday that it would refund all online pregame moneyline bets on the Houston Rockets, who ended up losing in double overtime to the San Antonio Spurs on Tuesday night. 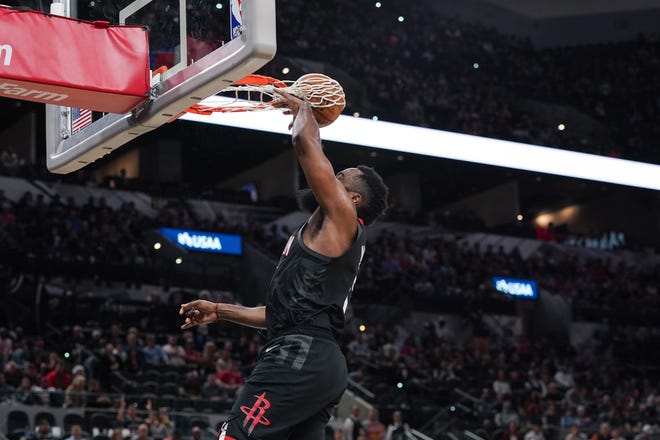 NBA referees ruled this James Harden basket did not count in the fourth quarter of Tuesday’s Houston Rockets-Sam Antonio Spurs game. It ended up costing Harden and his Houston teammates, as the Spurs won in double overtime. It also led FanDuel to refund some pregame moneyline bets placed on the Rockets. (Image: Daniel Dunn/USA Today Sports)

The refund comes after officials ruled offensive goaltending on a breakaway dunk by James Harden with 7:51 left in the game. Video replays showed that the dunk did indeed clear the net, which is required for a score, but the net also flew above over the rim as the ball exited. That gave the appearance that the ball failed to go through.

At the time, the Rockets led 102-89. The lead would grow to 105-89, before the Spurs rallied to tie the game in the closing seconds of regulation. The host Spurs would eventually pull out a 135-133 victory.

“The FanDuel Sportsbook believes it was ‘HARDen Luck,’ when a dunk by James Harden was mistakenly ruled an unsuccessful field goal in regular time and the Rockets wound up losing 135-133 in double overtime,” the sportsbook said in a statement announcing the refunds.

Bettors in Indiana, New Jersey, Pennsylvania, and West Virginia who wagered on the moneyline before the game were to receive their refund by Wednesday afternoon. The total returned is about $20,000.

Moneyline bets made during the game will not be refunded.

In an interview with a pool reporter after the game, James Capers, the officiating crew chief for the Rockets-Spurs game, said when the referees saw a replay of the dunk, they realized their call on the floor was incorrect.

Capers added that the play could have been reviewed during the game.

It is a reviewable matter, but you have a window of 30 seconds to challenge the play during the timeout that (Houston) had and while they were protesting the call, trying to get clarification of it, that window passed so therefore it elapsed and they were not able to do it,” Capers told the pool reporter, Mike Monroe from The Athletic.

That’s not the explanation Houston coach Mike D’Antoni said he received, per the Houston Chronicle. D’Antoni said officials told him the call was initially a goaltend, but then it was changed to a loose ball going out of bounds off Harden. He said he tried to challenge both, but the referees said he could not.

Houston may consider protesting the game to NBA officials.

Officiating Concerns in Each Major League

The Rockets-Spurs game is just the latest contest where a blown or controversial call affected the game’s outcome. And when the game’s outcome is altered, so, too, are the betting markets for a game. For example, the Rockets and Spurs were tied at 115 at the end of regulation. The over/under on the game was initially set at 234.

This isn’t just limited to the NBA, though.

Two months ago, an NFL officiating crew penalized Detroit Lions lineman Trey Flowers twice for hands to the face on third downs. Those penalties allowed the Green Bay Packers to score on two drives and mount a comeback, winning 23-22 on Monday Night Football. The NFL later admitted the second penalty, which led to the game-winning field goal, should not have been called.

After those penalties, ESPN college football analyst Desmond Howard called on the league to investigate its refs.

In April during the NHL’s Stanley Cup Playoffs, the Vegas Golden Knights were up 3-0 midway through the third period in the decisive Game 7 of their Western Conference first-round series against the San Jose Sharks. However, a major penalty called on Cody Eakin led to a five-minute power play that allowed the Sharks to rally and eventually win the game and series in overtime.

Golden Knights coach Gerard Gallant said game officials told him Eakin’s stick hit Joe Pavelski in the head, causing him to land on the ice bloodied. Replays showed Eakin actually hit Pavelski in the chest and a subsequent collision with Vegas forward Paul Stasny led him to hit his head on the ice.

In MLB, concerns with inconsistent strike zones among umpires have led to the league testing an electronic, or automated, strike zone in minor and fall league games.