It won’t quite be déjà vu on Saturday afternoon in Memphis when the Tigers host Cincinnati for the American Athletic Conference (AAC) championship. 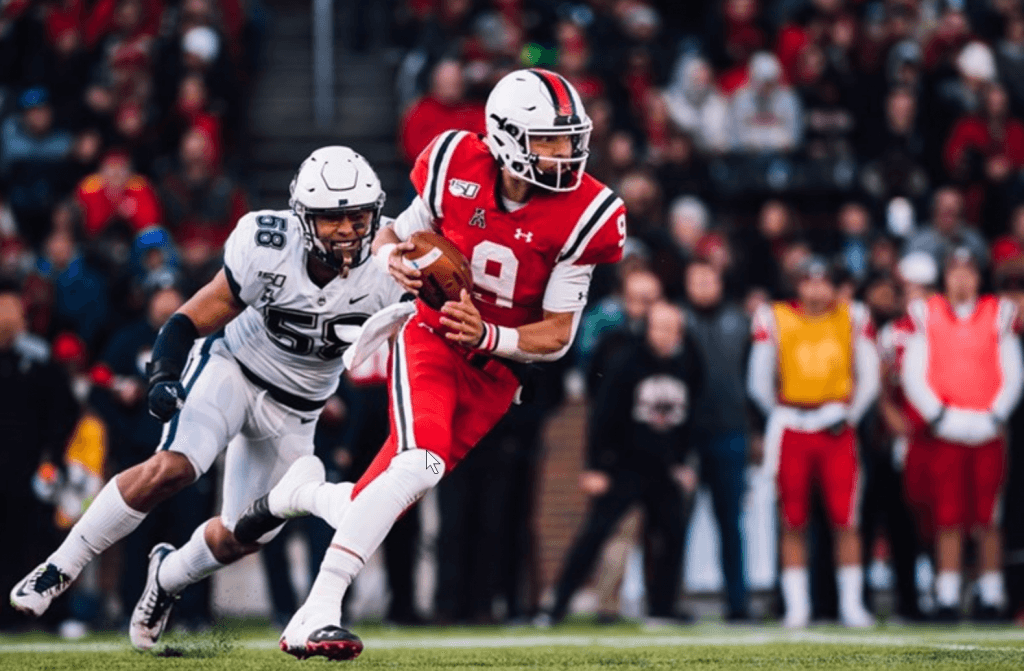 Cincinnati quarterback Desmond Ridder missed last week’s game against Memphis with a shoulder injury, but the Bearcats sophomore should be able to play in Saturday’s AAC championship against the Tigers. (Image: Nick Brown/Rooted Media GoBearcats.com)

The two teams will be playing each other in the same location for the second time in eight days. The host Tigers beat the Bearcats 34-24 on Nov. 29 at the Liberty Bowl With that, they earned the AAC West title and the right to host Cincinnati, the AAC East champion, again.

As Saturday serves as the title game, there will be even on to play for on Saturday. A Memphis win will all but secure the school a berth in a New Year’s Six (NY6) bowl game. Memphis currently is ranked No. 17 in the College Football Playoff rankings. That’s the highest of any team in a Group of Five conference, and those leagues are guaranteed just one spot in the top-tier bowls.

Cincinnati is 20th, but the Bearcats may need some help to an NY6 bowl invite even with a victory at Memphis. That’s because Boise State, which hosts Hawaii in Saturday’s Mountain West championship, sits at No. 19. A Broncos win will make it hard for the bowl selection committee to decide which team should get the coveted spot.

Oddsmakers have installed Memphis as a 9-point favorite on Saturday. Kickoff is set for 3:30 pm ET.

According to oddsFire, bettors at FanDuel are split on the Bearcats and Tigers.

Betting on the point spread is 51-49 for Cincinnati in terms of bets placed, but the money wagered on the spread is even.

Straight up, FanDuel offers -330 odds on Memphis and +255 on Cincinnati. Again, the bettors there are divided as 51 percent of the bets and 54 percent of the cash are on the Tigers.

At William Hill, the Tigers are a 9.5-point favorite. While 54 percent of the bettors there have tickets on Cincinnati, those tickets represent 80 percent of the money wagered.

The sportsbooks expect a high scoring affair as the over/under at FanDuel and William Hill is set at 57.5 points.

There may be one key difference on Saturday for the Bearcats.

Sophomore Desmond Ridder is expected to start at quarterback. He missed the regular-season finale between the schools due to an injured throwing shoulder. In 11 games this season, the right-hander completed 56.2 percent of his passes and threw for 1,836 yards to go with 17 touchdowns. He’s also added 432 yards rushing.

Over the last two seasons, Cincinnati is 21-3 when he plays.

Coach Luke Fickell said at an AAC press conference Friday it may end up becoming a game-time decision on Ridder, who was the conference’s top freshman last season.

I got a lot of respect for him,” Fickell said of Ridder. “I think we respect him enough that he’ll be honest with us, and then we have to evaluate it as well, even in warm-ups.”

Should Ridder be unable to go, Ben Bryant would get the call. Bryant went 20-of-32 for 229 yards while accounting for two scores (one rushing, one passing), but he had three costly turnovers in the second half that kept the Bearcats from keeping up with Memphis.

The Tigers, meanwhile, have no questions about their signal caller coming into Saturday. They’ll be led by Brady White, a Manning Award finalist, has thrown for 3,307 yards and 32 touchdowns while completing 219-of-330 passes (66.4 percent).

“He’s played at a high level this year, I think he’s one of the best quarterbacks in the country,” Memphis coach Mike Norvell told reporters Friday. “You look at what he’s done to lead this team, the way he’s developed in the consistency, the way he’s been able to push the ball down the field, making the right decisions, protecting the football.”