The Players Championship, the PGA Tour’s marquee event and so-called “fifth major,” tees off tomorrow at TPC Sawgrass in Ponte Vedra Beach, Florida. Defending champion and world No. 1 Rory McIlroy is the betting man to beat, his odds of winning golf’s richest prize at 8/1. 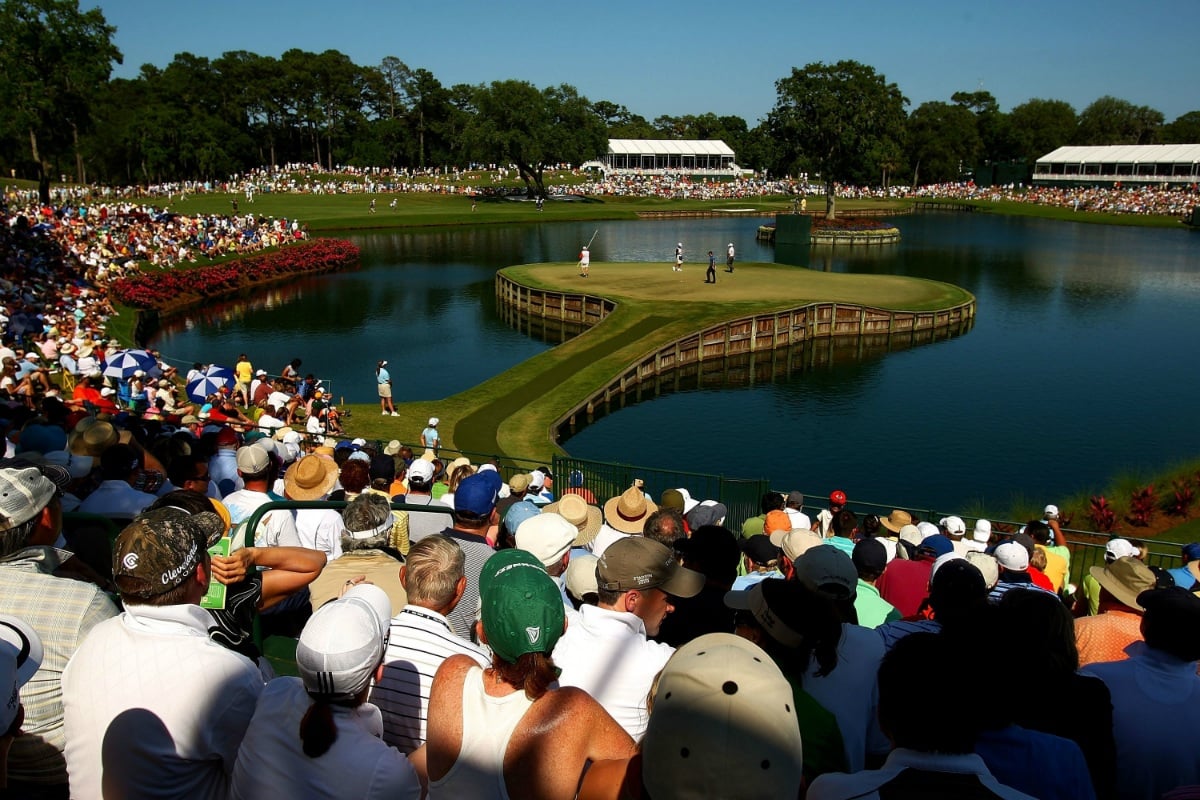 A host of story lines surround this week’s Players Championship, but one thing is for certain: the 17th will provide drama come Sunday afternoon. (Image: Scott Halleran/Getty)

Of the six experts on PGATour.com, two are going with McIlroy, and two with Justin Thomas – who has the third-shortest odds this week at 16/1. World No. 2 Jon Rahm is at 12/1.

Other popular picks include Patrick Cantlay (20/1) and Tommy Fleetwood (25/1). Fleetwood finished T5 a year ago, while Cantlay missed the cut.

Though he hasn’t won since November at the World Golf Championships-HSBC Champions in China, McIlroy is playing the best golf of anyone on the planet. Of the six events he’s teed it up at during the 2020 wraparound season, he’s finished no worse than fifth.

But at 8/1 in the 144-player field, which is one of the strongest fields on the golf calendar, many bettors will look elsewhere. And in 2020, several former winners of The Players are opening the week on rather long odds.

After McIlroy, Rahm, and Thomas, Bryson DeChambeau shares the 20/1 line with Cantlay.

Si Woo Kim shocked the golfing world in 2017 when he became the youngest player to win The Players Championship. He hasn’t won since, and has made just six cuts of the 13 tournaments he’s played in 2020. His best finish was a T26. Kim is at 250/1 this week.

2016 winner Jason Day is at 60/1. The Aussie has just one top-10 finish in seven starts. He finished fourth at the AT&T Pebble Beach Pro-Am last month. He withdrew from the Arnold Palmer Invitational last week because of back pain.

Jordan Spieth and Brooks Koepka have both sat atop the Official World Golf Ranking list. But poor play and a recent injury have set both players back.

For Spieth, it’s been a roughly three-year struggle since he dominated the game and won three majors between 2015-2017. Now ranked No. 56, he arrives at Sawgrass at 80/1. After finishing T4 at the 2014 Players, Spieth has missed four of the last five Players cuts. The lone time he played the weekend ended in a T41.

I still have some work, hopefully not very significant work, but I’m on the right track in my swing to get to where I feel I can be at that 2015 level again,” Spieth explained.

Koepka is battling back after undergoing a painful knee stem-cell injection. Now ranked No. 3, Brooks is at 40/1.

McIlroy, Rahm, and Koepka will be paired together for the first two rounds. McIlroy and Koepka have exchanged jabs recently, Brooks saying he doesn’t consider him a rival because “Rory hasn’t won a major since I’ve been on the PGA Tour.”