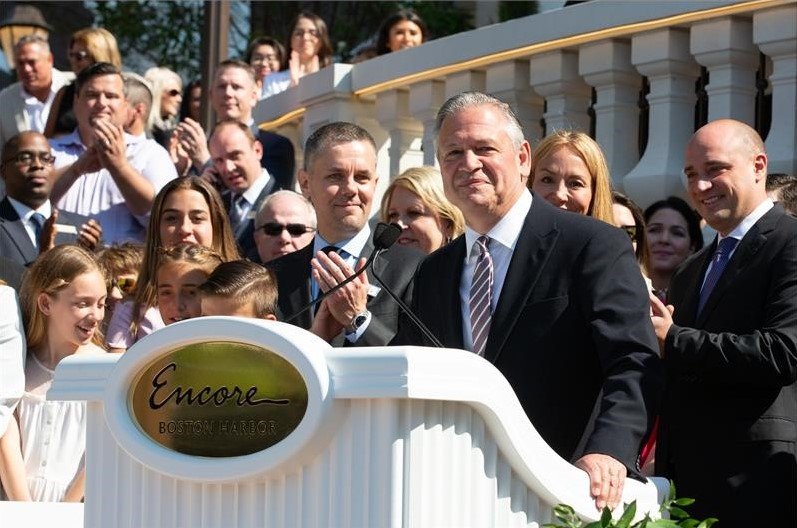 Bob DeSalvio speaks at the grand opening of Encore Boston Harbor in June. He served as president of the Wynn Resorts facility through its development and construction phases until he stepped down in October. On Monday, Genting Group tabbed the 41-year gaming industry professional to head its New York gaming properties. (Image: Michael Blanchard Photography/Encore Boston Harbor)

DeSalvio brings 41 years of experience to Genting and comes from overseeing the development and opening of Encore Boston Harbor for Wynn Resorts, a $2.6 billion integrated casino resort that stands as the largest development project in Massachusetts history. Monday’s Genting announcement came two months after his sudden departure from the casino that opened in June.

Before working for Wynn, DeSalvio joined the Las Vegas Sands Corp in 2006 and oversaw the construction and opening for the $840 million Sands Casino Resort in Bethlehem, Pa.

DeSalvio will put his expertise to work as soon as he starts, as Resorts World New York completes construction of a 400-room hotel on the casino’s grounds. The hotel is expected to open in the summer.

Resorts World operates the only casino in Gotham as the Queens casino is located at Aqueduct Racetrack near John F. Kennedy International Airport. It is the highest-grossing slots casino in the world, offering 6,000 slots and electronic table games.

The Catskills casino was acquired by Genting and Kien Huat, the family trust controlled by Lim, last month from Empire Resorts. The transaction allowed Genting to make the struggling casino privately held. It features an 18-story, all-suite hotel and 100,000 square feet of gaming space with 1,600 slot machines and 150 table games.

In the statement, DeSalvio said the Resorts World properties represent the future of gaming and hospitality in New York.

“Guests today are seeking that unique combination of gaming excitement, entertainment offerings, luxurious non-gaming amenities, and convenience, which only this brand can offer,” he said. “It’s an honor to join Genting, which has proven, with the success of Resorts World Casino New York City, that gaming in New York is full of untapped potential, and I am excited to be on the frontlines of the action.”

Other Management Changes at Genting

With DeSalvio taking over in New York, Genting announced that Edward Farrell would remain as president of Genting Americas and oversee Resorts World Bimini and Miami. In addition, Farrell will help DeSalvio integrate the Catskills property into the company as well as aid in the operational aspects of both New York properties.

Scott Molina remains the president of the New York City casino, and in the new organizational structure, he will report to DeSalvio.

Genting also announced the pending departure of Ryan Eller, who served as the CEO of Empire Resorts.