A bill that would nationalize drug testing and safety standards for horse racing will get its first hearing before Congress next week. 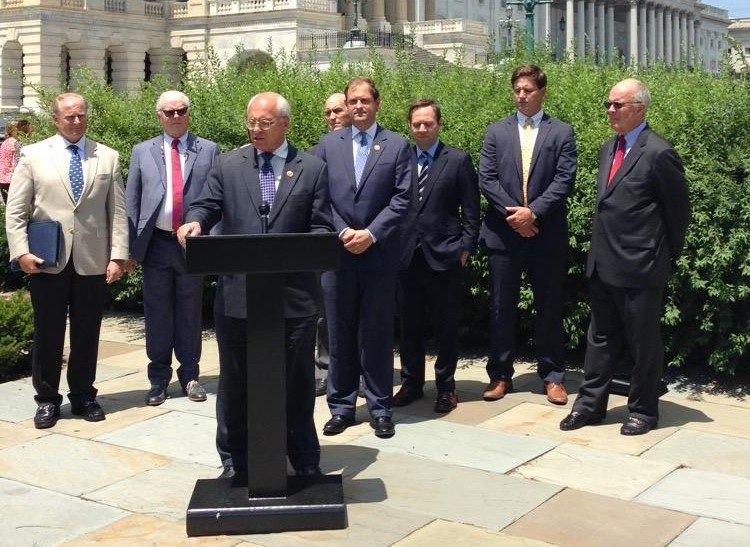 US Reps. Paul Tonko (at podium) and Andy Barr (center, foreground) have sponsored the Horseracing Integrity Act, which would nationalize drug and safety standards for race horses. (Image: RepPaulTonko/Twitter)

On Tuesday morning, the US House Committee on Commerce and Energy’s Subcommittee on Consumer Commerce and Protection will take testimony on the Horseracing Integrity Act, a bipartisan bill that would create a private regulatory body to oversee drug testing on horses in US thoroughbred, quarter horse and harness racing. It will be the first hearing for the current version of the bill, which was filed last March.

Currently, the sport is regulated at a state level, with some form of horse racing legalized in 38 states.

US Reps. Paul Tonko (D-New York) and Andy Barr (R-Kentucky), the bill’s primary sponsors, have filed similar bills in previous sessions of Congress. However, the spike in racing fatalities over the past year at Santa Anita Park has led to increased scrutiny in the sport overall. The current version of the bill, sponsored by lawmakers representing two horse racing hotbeds, has a majority of House members signed on as cosponsors.

In wake of the Santa Anita crisis, several track operators have announced voluntary measures that would phase in a ban on race-day medications over the next two years. The Stronach Group, which owns Santa Anita, along with Churchill Downs Inc., the New York Racing Association, and others have agreed to that policy, which means the 2021 Triple Crowns would be run without Lasix, an anti-bleeding medication that can be administered to horses before the race.

Among those who have been invited to testify Tuesday at the hearing are: Chris McCarron, a retired hall of fame jockey who supports the measure; Joe De Francis, former CEO of the Maryland Jockey Club and current chairman of the National Horseracing Advisory Council for the Humane Society of the United States (HSUS); and Marty Irby, executive director of Animal Wellness Action.

In a statement to Casino.org. Irby said he was pleased to see Congress take up the measure.

We applaud the leadership, dedication, and tireless work of Chairwoman Jan Schakowsky (D-Illinois), Rep. Paul Tonko, and Rep. Andy Barr to advance this legislation that will end doping, save equine lives, and help bring integrity back to American horseracing,” he said. “Animal Wellness Action will continue to press Congress to pass the legislation, and see the President ink his sixth animal protection measure into law before the 116th Congress ends.”

Others who have been invited to testify include Edward J. Martin, president and CEO of the Association of Racing Commissioners International. Martin has spoken out against the bill previously.

Proponents of the Horseracing Integrity Act say that restricting medications and adhering to international racing standards will make the sport safer, as racehorses in North America die or suffer injuries at a rate up to five times higher than elsewhere.

However, while the bill or at least some of its measures has the support of some racing organizations, others in the industry have concerns that banning race-day Lasix could have the opposite effect. Eric Hamelback, CEO of the National Horsemen’s Benevolent and Protective Association (HBPA), pointed to the Los Angeles County District Attorney’s report that examined the dozens of deaths that took place at Santa Anita. Eight substances were found in several of the horses, but none of them were illegal nor were they administered at levels exceeding state guidelines.

The HBPA represents about 30,000 owners and trainers,

Others have expressed concerns about how the initiatives that the bill establishes would be funded. Pat Cummings, executive director of the Thoroughbred Idea Foundation, told Casino.org that the only change from the 2017 bill to the legislation currently being considered is the old bill banned states from increasing the takeout of pari-mutuel wager pool to pay for the measures. The new bill does not have that provision.

That means states could require tracks to increase the hold from wagering pools to pay for initiatives the act would establish. In most states, the takeout rates range between 15 to 20 percent depending on the type of bet. A higher takeout, along with the emergence of sports betting in more states and its lower hold rates, could prompt customers to take their betting dollars elsewhere.

Cummings said the foundation, a think tank for the racing industry, does not have a stance on the Horseracing Integrity Act. However, it does have concerns about the overall long-term financial viability of the sport, especially as purses are propped up by other gaming revenues.

“We’re not taking a position pro or against, but the funding should not be placed on the back of horseplayers,” Cummings said. “And there should be a concern the two bills are different.”