Sports betting in Indiana rose by 5.6 percent in January, as the total handle jumped to $170.8 million for the month. That represented a $9 million increase in activity from December, according to figures released Monday by the Indiana Gaming Commission. 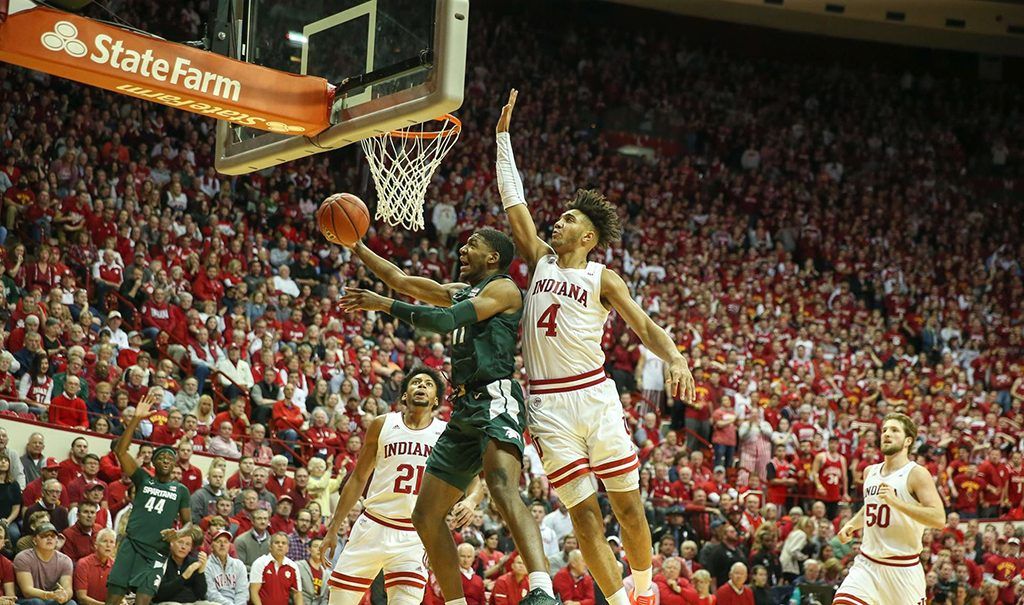 FanDuel’s promotional odds for the Indiana-Michigan State game helped the online sportsbook increase its handle in the Hoosier state by $13.5 million from December to January. (Image: Michigan State University)

The taxable adjusted gross revenue from the 11 licensees rose by about $900,000 to $12.9 million for the month. As a result, the state’s tax revenue on the receipts rose to $1.2 million, up from $1.1 million in December.

Despite the NFL playoffs, the college football championship game, and a number of other college bowl games – including the Jan. 2 Gator Bowl that included Indiana University – bettors in the state bet more on basketball than football for the month.

In December, when there was a full slate of NFL regular season games each weekend, including the Indianapolis Colts’ games, the football betting handle was $59 million. Basketball accounted for $42.3 million in December, and the sportsbooks took $45.6 million in parlay bets.

As the handle keeps increasing, so, too, does the percentage of bets taken through online applications.

The four mobile apps accounted for $123.3 million, or 72.2 percent of all Indiana’s sports betting handle in January. Of those, DraftKings and FanDuel amassed the lion’s share of the handle.

DraftKings has been the leader since it took its first online bet in early October, nearly a month before FanDuel. In January, DraftKings handled $66 million in bets, down slightly from $66.7 million in December.

FanDuel has aggressively pursued gaining market share in Indiana. Last month, it offered its second “Spread the Love” offer, where it increased the point spread in the Jan. 23 Indiana-Michigan State college basketball game. The Hoosiers initially started as 2.5-point underdogs, but for every 250 bettors, the line grew by a point, and every bettor got the final spread.

Not to be outdone, DraftKings started taking a page from FanDuel’s book. For the Jan. 29 Penn State-Indiana game, DraftKings offered a total of 51, a ridiculously low number for a college basketball game. The promotional -110 odds were available in Indiana and Pennsylvania, where DraftKings trails FanDuel in market share.

Racinos Cash In on Table Games

January also marked the first month for table games at Indiana’s racinos, and both of them reported strong starts, according to IGC data.

The 43 tables at the Indiana Grand generated more than $4 million in revenue for the Shelbyville casino. That was the third-highest total, even though six other casinos offer more tables.

Meanwhile, Harrah’s Hoosier Park in Anderson reported table revenues of $2.4 million. That was good for sixth in the state, even though only two of the state’s 13 licensed casinos have fewer tables. For comparison, Hollywood Lawrenceburg has 49 more tables than Hoosier Park, but the casino just outside Cincinnati reported only about $160,000 more in revenue.

Both racinos are owned by Caesars Entertainment.

Factoring in the table games, the Indiana Grand reported adjusted gross revenues of $25.5 million for January, the second-highest of any casino in the state. The $19.7 million for Hoosier Park ranked fourth.