The lengthy delay in releasing Monday’s Iowa caucus results might have been damaging to the Democratic party, but it did wonders for the political trading market. 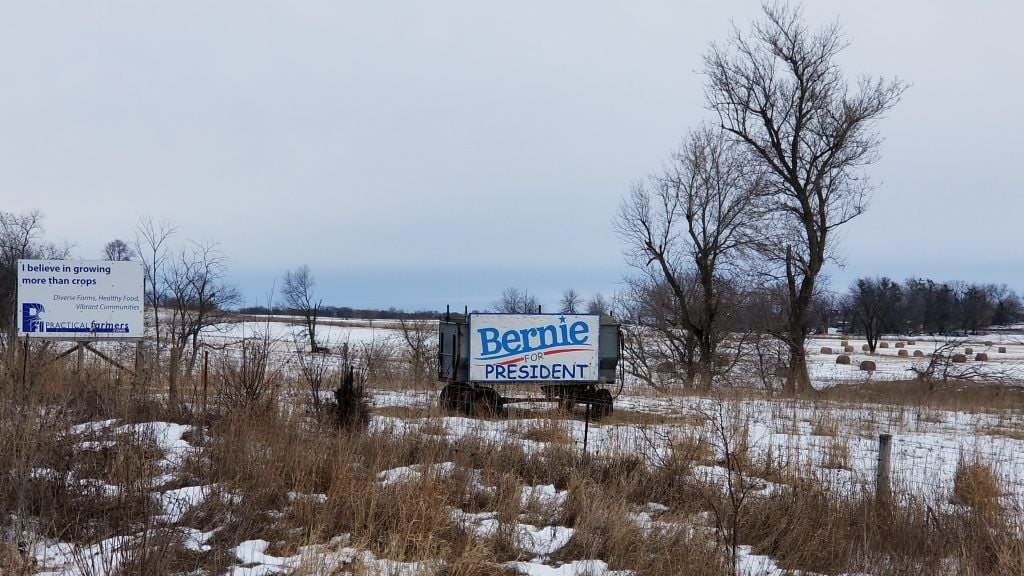 An Iowa farmer shows his support for US Sen. Bernie Sanders with a painted sign facing Interstate 80. (Image: Casino.org)

A spokesperson for PredictIt told Casino.org on Tuesday afternoon – prior to the initial first returns being announced – Monday was their busiest day of the year, with 7,500 people making at least one trade in a market. That’s up from a normal day of between 1,000 and 2,500 trades.

“Now that the election cycle is in full swing, that number is steadily climbing, too,” Will Jennings said.

For the Iowa market, there were 4.3 million share outstanding.

If anything, the delay has only given traders more time to speculate and debate amongst other traders what the outcome will be,” Jennings said. “It’s a waiting game for now, but we anticipate a flood of trades the second the official numbers are released.”

Shortly after 4 pm CT Tuesday, the Iowa Democratic Party announced that, with 62 percent of the caucus sites reporting, South Bend, Ind., Mayor Pete Buttigieg had nearly 27 percent of the delegates and US Sen. Bernie Sanders (I-Vermont) about two percentage points behind.

On the day before the caucus, Buttigieg was languishing in the market, trading at 8 cents a share. As Monday came, his price started going up as word of mouth and media reports indicated he was winning some precincts, and his shares were trading for up to 36 cents.

That’s about where the price stayed from Monday evening into Tuesday afternoon. However, once the party released the initial returns, his price shot up. As of 8:30 pm CT Tuesday, those shares were trading at 70 cents.

Sanders, who was the front-runner on PredictIt early Monday, saw his shares drop to 32 cents as of Tuesday evening.

It’s possible Sanders may end up with more caucus votes than Buttigieg. However, PredictIt is basing the winner off of delegate share, and Buttigieg’s strategy to target smaller rural areas appears to have worked in that regard.

No other candidate is trading for more than a cent in Iowa.

PredictIt, the only legal market for political betting in the US, cashes out shares of the winning candidate at $1 each.

The Race for the Nomination

Regarding the Democratic nomination market, Sanders is still leading there. But his stock is falling. As of Tuesday evening, those shares are trading at 40 cents a share, down from 46 cents on Sunday.

Biden’s stock is in free-fall. After trading at 34 cents a week ago, he was down to 19 cents on Tuesday night.

Thanks to his strong Iowa showing, Buttigieg is seeing a bump. But his nomination stock is still only trading at 15 cents per share.

Surprisingly, a candidate that was not involved in Iowa is seeing a bump. Former New York Mayor Michael Bloomberg is taking a step up, and he doesn’t even need a box. Currently, he’s second behind Sanders. After trading in the teens for the past week, he was up to 21 cents per share on Tuesday night.