UFC champions Israel Adesanya and Zhang Weili are both favored to successfully hold on to their titles on Saturday night. But they’ll face dangerous opponents at T-Mobile Arena in Las Vegas in their UFC 248 bouts. 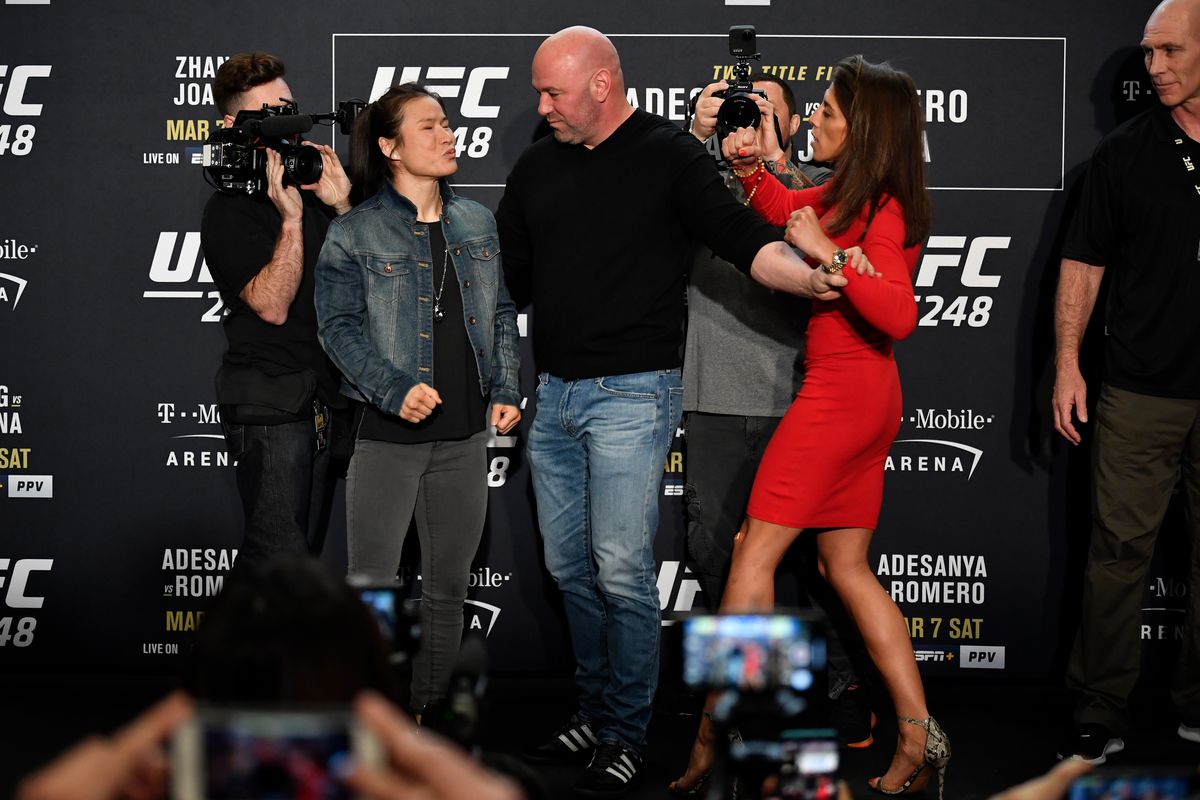 DraftKings Sportsbook lists Adesanya as a -278 favorite over Yoel Romero in their middleweight title fight (+225), while Zhang (-177) deals with an even tougher challenge from Joanna Jedrzejczyk (+145).

When Israel Adesanya agreed to take on No. 3 contender Yoel Romero, many questioned whether the decision was a smart one. While Romero has lost three of his last four fights, he remains one of the most dangerous middleweight fighters in the world.

Other top contenders in the division have gone out of their way to avoid fighting the 42-year-old. It’s easy to see why: Romero maintains elite knockout power and has one of the strongest chins in all of MMA.

Still, Adesanya says there’s nothing to fear from the Cuban-born Olympic wrestler.

Romero made weight on Friday morning, though he was the last fighter on the UFC 248 card to do so. He failed in two previous attempts to make weight for championship fights, but came in at 184.5 pounds with about 20 minutes to go in the weigh-in period.

If Romero has one clear edge over Adesanya, it’s likely in wrestling, which remains a strength for him to this day. But Romero says he may keep the fight on its feet, if only to avoid leaving the result to chance.

Zhang Weili will make the first defense of her women’s strawweight title at UFC 248 against former champion Joanna Jedrzejczyk. Zhang won her title in under a minute last August when she defeated Jessica Andrade. Now, she says she has added motivation to get another win on Saturday.

I might not have pushed myself or prepared as hard if not for the coronavirus,” Zhang told Yahoo Sports. “China is going through a very tough time now, but everybody is doing their job. I did my job to make this happen and I believe winning will be great motivation for my country. I’m doing this for my people.”

Zhang has dealt with jokes about the coronavirus throughout her training. Fans of Jedrzejczyk even chanted “coronavirus” at her during Wednesday’s open workout. Zhang gave those fans the middle finger, something Jedrzejczyk took exception to.

“What you have done yesterday to my fans, you never do that,” Jedrzejczyk told Zhang during their media day faceoff. “Why did you do that? I will outclass you on Saturday.”