A federal judge dismissed a lawsuit Friday filed by owners of Maximum Security, who claimed their constitutional rights were violated when stewards disqualified the colt as the winner of this year’s Kentucky Derby. 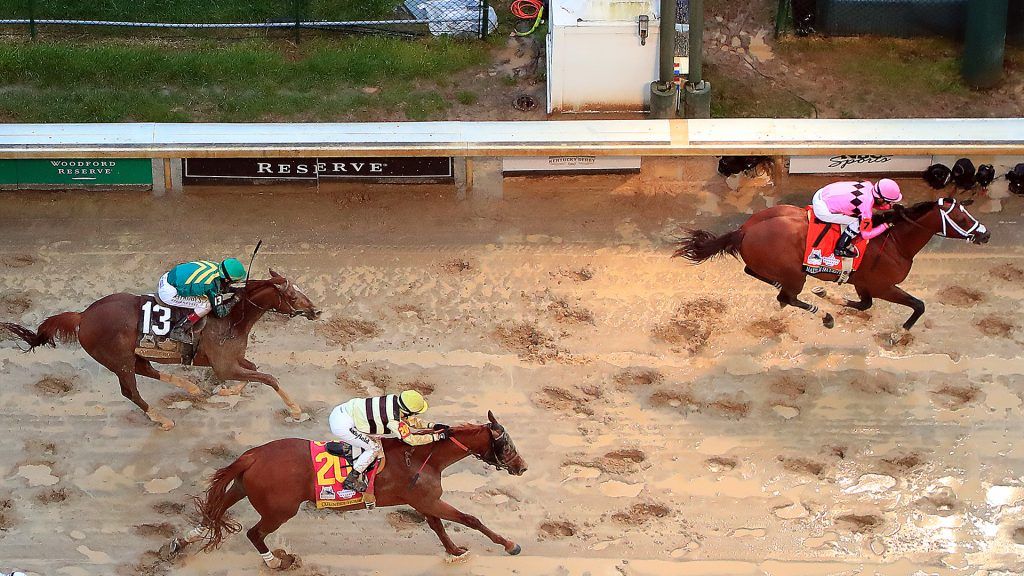 Maximum Security (top right) crosses the finish line first in the 2019 Kentucky Derby on May 4, but stewards later disqualify him for interfering with other horses. A federal lawsuit over that ruling was dismissed Friday. (Image: Jamie Squire/Getty Images)

The ruling comes more than six months after a panel of three stewards from the Kentucky Horse Racing Commission (KHRC) needed more than 20 minutes to determine that the horse owned by Gary and Mary West impeded War of Will’s progress in the final turn and caused interference with other horses.

As a result, stewards placed Maximum Security 17th, one spot behind Long Range Toddy, who was the lowest placing horse who stewards ruled was affected. That made 65-1 Country House the winner. At $132.40 for a winning ticket, it was the second-highest price paid at Churchill Downs for a Derby winner.

It was the first time in Derby’s 145-year history that a winning horse was taken down by a stewards’ ruling. Making the ruling even more controversial is that Maximum Security led wire-to-wire and none of War of Will’s connections filed an inquiry. Neither did the stewards post an inquiry after the race. The panel only reviewed it after Jon Court, Long Range Toddy’s jockey, filed a complaint.

However, none of those factors played into the stewards’ decision, which US District Judge Karen Caldwell ruled was the final decision.

Kentucky’s regulations make clear that the disqualification is not subject to judicial review,” Caldwell wrote in her 29-page order. “Further, the disqualification procedure does not implicate an interest protected under the Due Process Clause of the U.S. Constitution.”

Caldwell’s order is subject to appeal, and an attorney for the Wests told the (Louisville) Courier Journal Friday night they believe they have a good case to take to the US Sixth Circuit Court of Appeals.

No ‘Right to Benefits’

The Wests filed the federal lawsuit in Kentucky’s Eastern District federal court on May 14, eight days after the KHRC denied their protest on the grounds that stewards’ decisions cannot be appealed.

In the suit, the couple claimed they were denied a share of the nearly $1.9 million purse as well as “a professional accomplishment that any horseman would cherish for life, plus the very substantial value that a Kentucky Derby winner has as a stallion.”

However, Caldwell said that Kentucky’s horse racing regulations do not grant a “right to benefits” for winning any race, including the Derby.

“The Wests have not established that the defendants’ conduct deprived them of a protected life, liberty, or property interest,” the judge wrote. “Accordingly, their procedural due process claim based upon how the stewards arrived at the decision to disqualify Maximum Security must be dismissed.”

Despite the lawsuit, it’s possible Maximum Security could return to the Louisville track in the weeks ahead.

Ben Glass, who serves as the Wests’ racing manager, told HorseRacingNation the owners and trainer Jason Servis are looking at racing one more time this year before preparing for January’s $9 million Pegasus World Cup at Gulfstream Park in Florida.

One possibility is Churchill’s Clark Handicap, which will run on Nov. 29.

In his first start after the Derby DQ, Maximum Security finished second in the Pegasus Stakes at Monmouth Park back in June. A month later, though, he found himself back in the winner’s circle after claiming Monmouth’s Haskell Invitational, although he had to survive an inquiry in that race as well.

In his last race, the Oct. 26 Bold Ruler Handicap at Belmont Park, Maximum Security led wire-to-wire and won by nearly two lengths as the 3-5 favorite.

His only finish off the board was in the Kentucky Derby.