The Road to the Kentucky Derby goes through New Orleans on Saturday with the running of the Grade III Lecomte Stakes at the Fair Grounds Race Course. A deep field of 13 colts will run in the 1-1/16th mile race with a $200,000 purse. 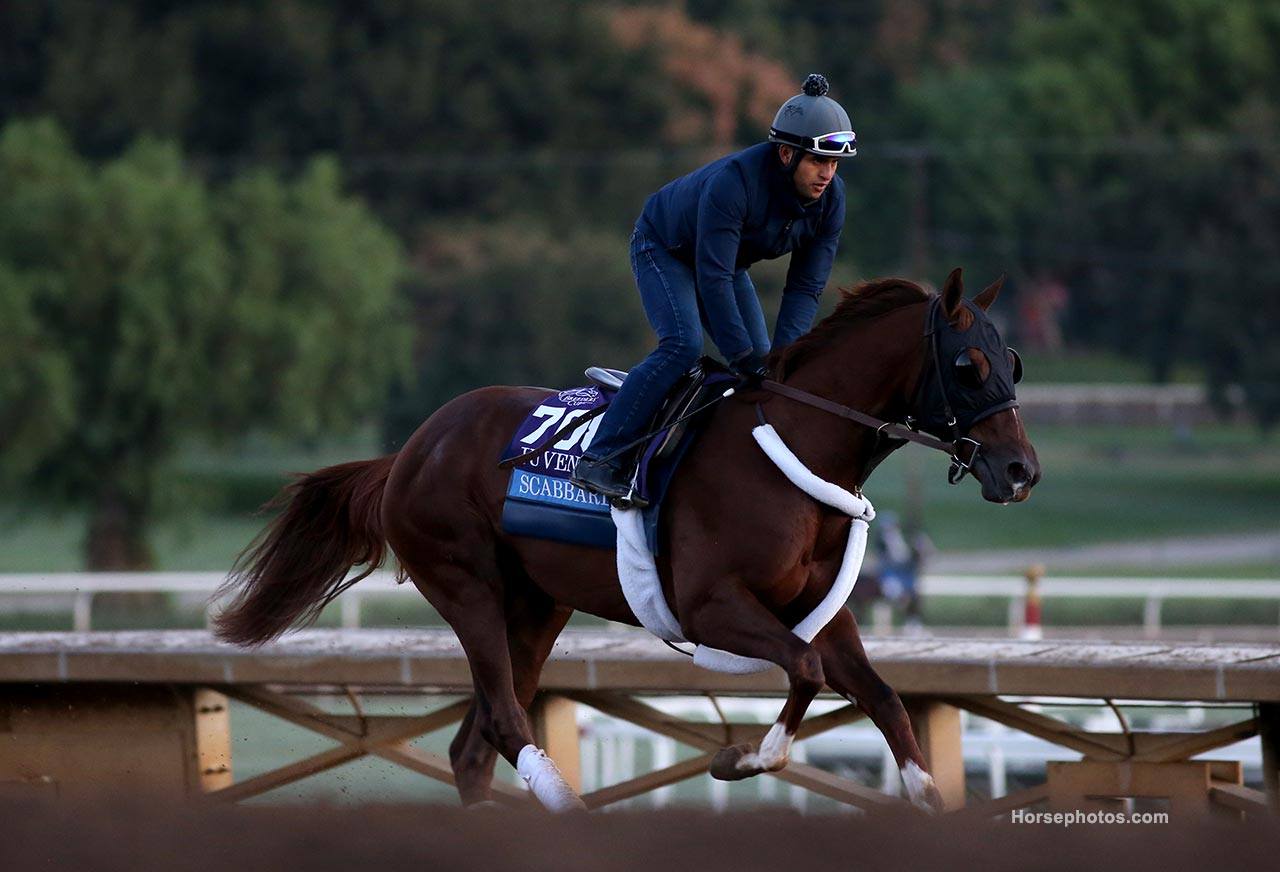 Scabbard is the morning-line favorite in the Lecomte Stakes, an early Kentucky Derby prep race at Fair Grounds in New Orleans. He’s raced in three stakes races but still seeks his first win in one. (Image: Cecilia Gustavsson/horsephotos.com)

Last year, War of Will won the Lecomte going away as the favorite. He then followed it up with another in the Fair Grounds Grade II Risen Star, another Derby prep. He later took home the second leg of the Triple Crown, pulling away to win the Grade I Preakness Stakes at Pimlico.

The morning line favorite for this year’s running is Scabbard. Other entrants have more wins or more races under their belts, but the Eddie Kenneally-trained colt has the most experience in graded stakes. Three of his four career starts have come in those, with a pair of second place finishes in the Grade II Saratoga Special and the Grade III Iroquois at Churchill Downs.

He’s coming off a fourth place finish in the Grade I Breeders’ Cup Juvenile at Santa Anita back in November. He started wide in that race and never really threatened as he stayed in the middle of the pack throughout.

He didn’t care for the surface too much,” Kenneally about his horse’s Breeders’ Cup trip. “He’s a closer and that track wasn’t playing well to closers that day. He fought on and ran his race and got up for fourth.”

Ridden by Corey Lanerie, Scabbard will break from the fourth gate and has morning-line odds of 7-2.

Among the horses expected to challenge Scabbard, based on morning-line odds, are Mr. Monomoy. Back in November, the Brad Cox-trained colt broke his maiden, pulling away to a 5-1/2-length win in his second start. He lost last month in a mile allowance race at the Fair Grounds by a neck to Lynn’s Map, who was scheduled to run Saturday but was scratched after drawing the far post.

Florent Geroux will ride Mr. Monomoy, who starts at odds of 9-2.

Trainer Steven Asmussen has a pair of horses in the field, including Silver State. After winning his first start, he lost his second at the wire by a nose in a mile allowance race at Churchill Downs on Nov. 30. He’ll break ninth, ridden by Ricardo Santana, with 5-1 morning-line odds.

Sycamore Run breaks from the 13th gate. He’s raced just once, a solid victory in a six-furlong maiden race at Fair Grounds on Dec. 21. However, trainer Joe Sharp said that while his colt may look like a sprinter, he thinks Sycamore Run may have the potential to run longer distances.

“He’s got a lot of gears,” he said. “In those big fields, having tactical speed is always important for position, but also the ability to shut off and save something for the end is crucial. I think he has those qualities.”

Adam Beschizza gets the call on Sycamore Run, who has morning-line odds of 6-1.

With a deep field of unproven 3-year-olds, there should be plenty of value in betting the exotics.

Mr. Monomoy is the half-brother of Monomoy Girl, who won nine of her 11 starts. That includes the Kentucky Oaks and the Breeders’ Cup Distaff. He’s also sired by Belmont Stakes champion Palace Malice, who won five other graded stakes as well. He lost barely in last race, his first around two turns. If he shows improvement Saturday, he may just find himself among the contenders for the Kentucky Derby.

It’ll be a big test for Sycamore Run to jump from six furlongs to more than a mile, but he may be able to find his way into the money on Saturday.