Some members of the Kentucky Horse Racing Commission (KHRC) may be clamoring for live racing to return to the state. But as long as COVID-19 is still a threat, then Gov. Andy Beshear doesn’t see how it can happen soon. 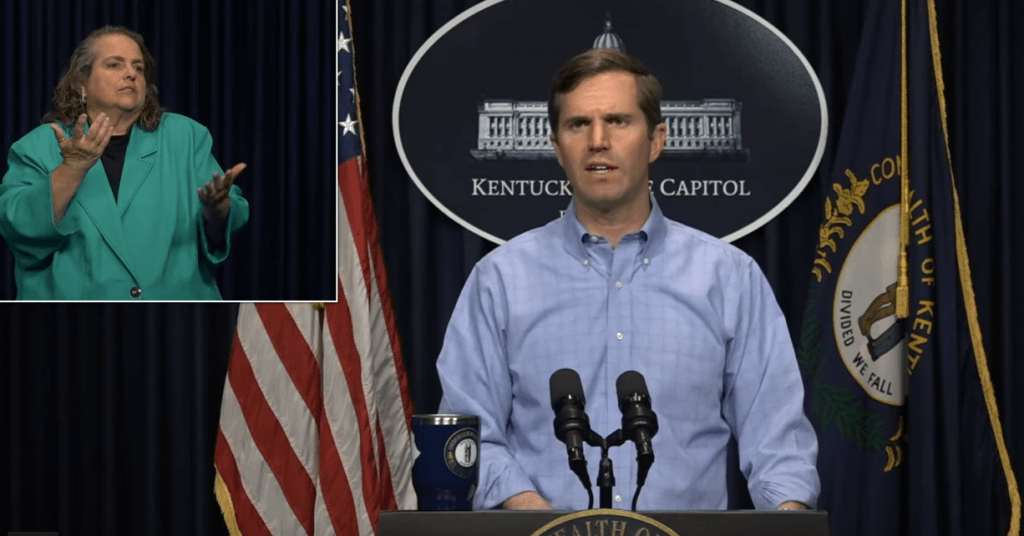 Kentucky Gov. Andy Beshear said the state is likely months from allowing horse racing to be held in the state as the COVID-19 outbreak continues. (Image: KY.gov/YouTube)

A day after Commission Chair Frank Kling told the officials from Kentucky’s harness and thoroughbred tracks that he could not give an update on when racing could resume, Beshear said that it will take as long as it needs to defeat the coronavirus in the state.

The Democratic governor added he believes that’s months, not years, away.

But the moment that we start trying to say that we believe it’s X days away, is the moment people start relaxing on the social distancing, we see the spike (in cases) and ultimately, we lose more people because of it,” Beshear said.

However, before that order, the Northern Kentucky track had been racing without fans for a couple of weekends, as had other tracks across the country. Keeneland in Lexington, which was supposed to start its three-week spring meet this weekend, canceled the session outright because of the pandemic.

Racing ‘Nice to Have’ in Fl orida

Commissioner Dr. Foster Northrop, an equine veterinarian currently in Florida, told his colleagues that Gulfstream Park’s meet without fans had been going very well. That was before Florida Gov. Ron DeSantis issued a statewide stay-home order, so at the time Northrop wasn’t sure if The Stronach Group track would continue to race.

Northrop said Gulfstream is taking several steps to fight the spread of the coronavirus. Horses are limited to one groom, one trainer, and one jockey. He noted that that track has had to employ extra security to intercept people trying to watch the races in person.

“It’s been very nice to have the racing continue here in Florida,” he told the commission.

Besides Florida, horse racing also continues at tracks in Arkansas, California, Nebraska, and Oklahoma. Proponents say racing is needed to help support the industry’s farms and workers. They also say that if the horses do not maintain their training, it could be detrimental to their health.

Allowing racing without a crowd is something that may happen sooner. But Beshear said Friday that Kentucky’s coronavirus numbers need to decline first.

“At least as long as we are seeing an escalation, you would still have groups of people that would have to come together to make that happen,” he said. “It’d be the same thing as the NBA, which is being canceled right now. So, while there might be a point, hopefully, when we see cases going down where that’s something that we could consider, right now, we shouldn’t be getting people together for any reason whatsoever.”

Kentucky has been one of the more successful states in flattening the curve and preventing the spread of COVID-19 so far. That has kept the state from seeing hot spots emerge that could overwhelm both Kentucky’s medical personnel and the equipment needed to treat patients.

According to the University of Washington’s Institute for Health Metrics and Evaluation’s COVID-19 projections, the Bluegrass State is more than a month away from likely seeing the climax of the resources needed to treat those infected with the virus. Even then, the state’s hospitals are projected to have enough resources, such as ICU beds and ventilators, as long as residents continue their commitment to practicing the social distancing guidelines.

On Sunday afternoon, Beshear reported that five more people have died from COVID-19, bringing the state’s total fatalities to 45. Of the 955 cases identified, 306 people have recovered.

Using the Institute’s current projections, that would likely mean the state would start seeing a noticeable decline in COVID-19 cases by the beginning of June. However, the projections still show people would still become infected and need hospitalization through late July.