The NBA takes center stage on Christmas Day, as it offers an all-day marathon featuring five games, including several that could double as playoff previews. 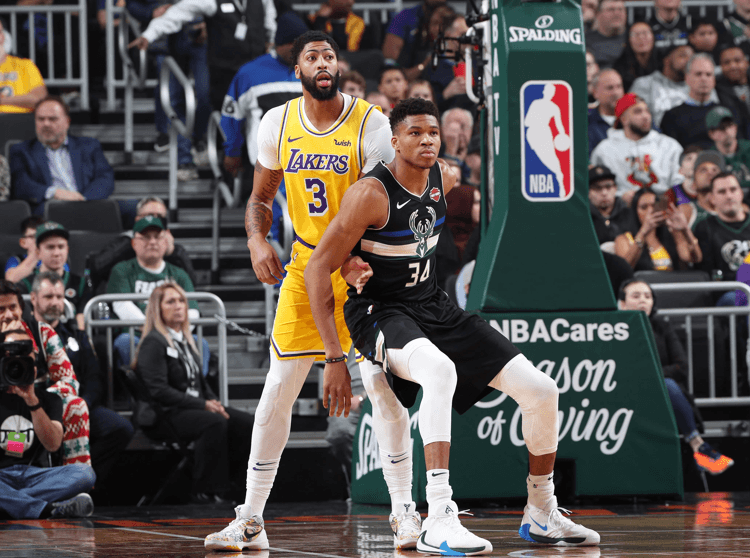 The Lakers Anthony Davis squared off against Milwaukee’s Giannis Antetokounmpo on Thursday. While they won’t face each other on Christmas, both still have big games to play as part of the NBA’s holiday marathon. (Image: Joe Murphy/Getty Images)

Yes, due to injuries, a couple games have fizzled out. That means Houston is an 11-point favorite on the road against a struggling Golden State squad that is trying to endure without Steph Curry, who suffered a broken hand nearly two months ago.

Meanwhile, the nightcap, New Orleans at Denver, lost its luster when top draft pick Zion Williamson suffered a knee injury late in preseason action that has kept him shelved ever since. As a result, the host Nuggets are 9.5-point favorites against the Pelicans.

Still, the remaining three games offer plenty of intrigue, with the top four favorites for this year’s NBA title facing off against each other. In the East, the Milwaukee Bucks, led by reigning MVP and this year’s front-runner Giannis Antetokounmpo, travel to face Joel Embiid and the Philadelphia 76ers.

In primetime, it’s the battle of Los Angeles, as LeBron James and Anthony Davis lead the Lakers against the Clippers, featuring Kawhi Leonard and Paul George. Despite losing three straight, the Lakers still lead the Clippers in the Western Conference’s Pacific Division by three games.

Tipping off the NBA Christmas action will be the Boston Celtics, who hit the road as the favorite over the Toronto Raptors. William Hill and DraftKings list the Celtics as 3-point favorites, while FanDuel makes them 3.5-point favorites over the defending champs.

Boston-Toronto, which tips at Noon ET, and New Orleans-Denver, which is scheduled for 10:30 pm ET, will air on ESPN. The other games will be shown on ABC.

At 27-4, the Bucks own the best record in the NBA. They head to Philly as 3-point favorites, according to DraftKings and William Hill. FanDuel, meanwhile, lists Milwaukee as 2.5-point favorites.

According to oddsFire, bettors like the Bucks on the road by a wide margin over the Sixers. The Bucks command 71 percent of the spread bets, which equal 73 percent of the handle. As of Tuesday afternoon, FanDuel was offering Philadelphia and the points.

On the moneyline, FanDuel offers Milwaukee at -148 (the Sixers are +126). Milwaukee has attracted 74 percent of both the wagers and the money on the straight-up bets.

With the total points set at 220.5, bettors are divided on the over/under. According to oddsFire, 51 percent of bettors like the under, but 58 percent of the money is on the over.

The Lakers come into the game against the Clippers at less than 100 percent. Both James and Davis are listed as questionable with knee injuries. James sat out Sunday’s 24-point loss to Denver, while Davis, who missed the Dec. 17 game at Indiana that started the three-game skid, scored 32 points and grabbed 11 rebounds in the loss to the Nuggets.

Despite the losing streak, Los Angeles still owns the Western Conference’s best record. However, Lakers coach Frank Vogel told reporters Monday that it’s important not to let this streak spiral into something bigger.

When you hit adversity, and this is probably a minor adversity type of stretch for us, there’s always potential for cracks and splinters, and we want to make sure that none of that stuff shows up,” Vogel said. “We’re all trying to do the right thing. We just got to be better.”

Bettors, though, like the Clippers. According to oddsFire, 63 percent of spread bettors are taking the points. That represents 66 percent of the handle.

Bettors believe the game will be tight and defensive. The total is set at 222.5, and 91 percent of betters and a whopping 99 percent of the handle are on the under.

The game is scheduled for 8 pm ET.