The NCAA title chances for the Memphis Tigers took a huge hit this week when freshman phenom James Wiseman announced he would forego the rest of this season and get ready for June’s NBA Draft, where he’s considered a likely choice to be the top pick. 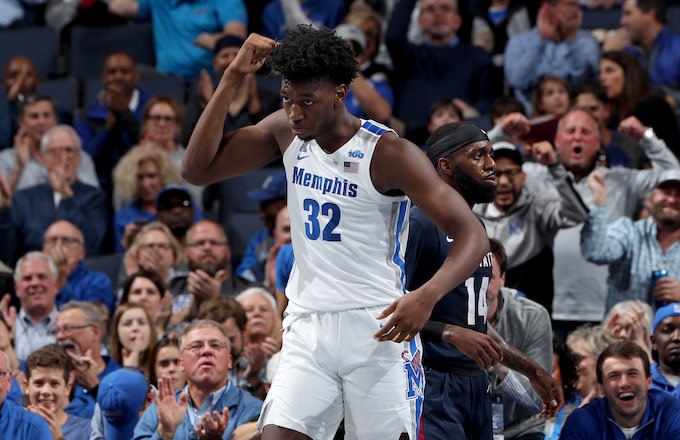 Wiseman, a 7-foot-1 center, had been sitting out due to a 12-game suspension handed down by the NCAA in late November. It stemmed from donations made by Memphis coach Anfernee “Penny” Hardaway to both the school, his alma mater, and to Wiseman’s family.

Hardaway made his $1 million contribution to the school more than a decade ago, before he became its coach. As such, the NCAA deemed him a booster, which meant his contribution for their moving expenses became an improper benefit.

Besides sitting out until Jan. 12, Wiseman would also have needed to make an $11,500 donation, the amount of money his family received, to any charity he chose.

In making an announcement on his Instagram page, Wiseman thanked the Memphis coaches and staff, adding that the program and fans would have a place in his heart.

Today I formally withdrew from the University of Memphis and I will be preparing for the next chapter of my life,” Wiseman said. “Ever since I was a little kid, it’s been a dream of mine to play in the NBA. Throughout this process, I’ve asked God to ordain my steps and lead me in the right direction.”

Wiseman, who entered college as the nation’s top-rated recruit, played in just three games this season for the Tigers. He averaged 19.7 points and 10.7 rebounds while just playing 23 minutes per game.

Wiseman was the crown jewel of Hardaway’s recruiting class, which was rated the top class in the country by several college basketball recruiting sites. Because of that, oddsmakers took notice.
In October, just after team started practicing, William Hill had the Tigers at +1200. Meanwhile, FanDuel had Memphis at +1300 and BetRivers offered the team at +1600.

The suspension altered the odds. When the NCAA announced the suspension, FanDuel offered Memphis at +3500, while PointsBet listed him at +3000. Within moments, the school’s odd shot up to +5000 at both sportsbooks.

William Hill and BetRivers also currently list the Tigers at +5000 as well.

Entering Saturday’s competition, Memphis ranked 16th in the NCAA’s NET Rankings. That’s the ratings formula the selection committee uses to determine seedings for the tournament. That would put the Tigers at either a fourth or fifth seed in a regional.

Odds Vary for Many NCAA Contenders

Wiseman’s departure is the latest swing in what has been a very turbulent college basketball season. Including Kansas’ loss at Villanova on Saturday, five teams have lost after they’ve been ranked No. 1 in the Associated Press weekly poll.

The season is less than eight weeks old.

From a bettor’s perspective, the uncertainty means you may be able to find your favorite college basketball team at desirable odds if you do some sportsbook shopping.

For example, Gonzaga and Ohio State are the co-favorites at BetRivers with odds of +800. However, you can find Gonzaga at +1400 over at FanDuel, and you can grab Ohio State at +1100.