Fans of “Ozarks,” the popular Netflix drama crime series starring Jason Bateman and Laura Linney, might think Missouri Rep. Rocky Miller (R-Lake Ozark) has been binging the show a bit too much. 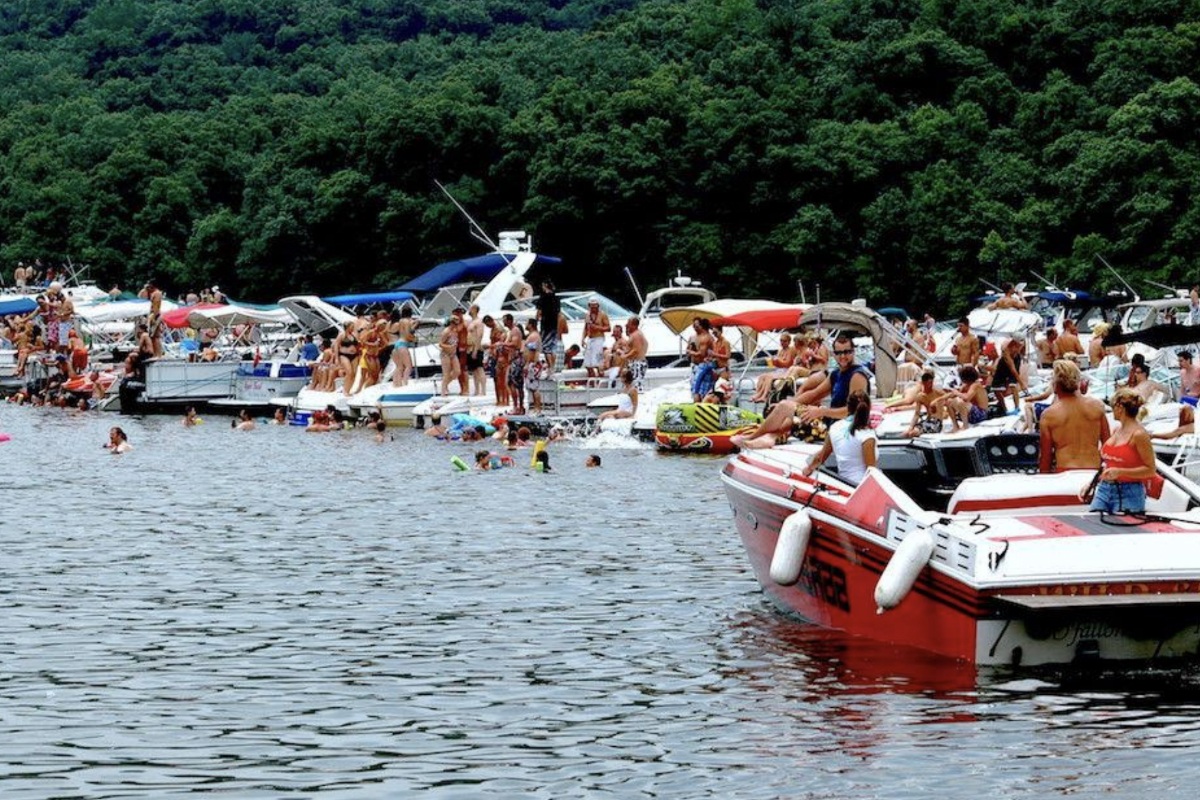 The Ozarks Party Cove atmosphere (seen here in 2012) has been greatly diminished over the years. Now, one state lawmaker wants the Osage River to have the right to welcome a gaming boat. (Image: LakeExpo)

Last week, Miller prefiled a resolution that would ask voters through a ballot referendum whether they want to permit casino riverboat gambling on the Osage River. It’s a storyline right out of season 2 of “Ozarks,” which sees Bateman’s character trying to convince lawmakers to allow him to operate a gambling vessel at Lake of the Ozarks.

People have kind of noticed it sounds like the show, and I say, ‘Yeah, because I’m the one that told the guys about it,’” Miller explained to the Springfield News-Leader.

The Republican says he served as a consultant to the show’s producers, and told them he’s long questioned why Missouri’s riverboats can only be in the Missouri and Mississippi rivers. Missourians legalized riverboat gambling in 1992. The vote came with 13 licenses, which are all in operation today.

Miller’s resolution wouldn’t add to the number of 13 casino licenses. Instead, it would simply allow riverboat gambling to come to the Osage should one of the current concession holders wish to relocate, or sell the permit.

Miller said he didn’t add a casino license to the resolution because he felt such a motion would generate stern opposition from the gaming industry.

Eldorado Resorts owns and operates three Missouri riverboats – Isle of Capri in Kansas City and Boonville, and Lumiere Place. The company will add a fourth – Harrah’s North Kansas City – when its acquisition of Caesars Entertainment is completed later this year.

Eldorado reached a deal last June to sell its casinos in Caruthersville and Cape Girardeau to Century Casinos. Affinity Gaming and Boyd Gaming each have two Missouri riverboats, while Penn National operates three.

Miller sits on the Missouri House Economic Development Committee and Special Committee on Tourism. He says the way the state’s gaming law is presently arranged put his constituents at an economic disadvantage.

“I care about my area here and the fact that they’ve had an economic bias placed against them,” Miller stated.

Miller represents Lake Ozark, where the area had for decades been the state’s party headquarters each summer through Labor Day. Party Cove, a roughly one mile inlet, was packed with recreational boats anchored side-by-side and rowdy partiers aboard.

But those days have largely ended. Following the deaths of two people in 2007, state and local law enforcement agencies greatly increased its water patrol of the party scene. The greater police presence turned away many.

Lake News Online says the “days of thousands of boats … creating a gauntlet where rowdy behavior and water cannon welcomes were part of the weekend party have gone by the wayside.”

That’s all just fine in the minds of many locals, who largely opposed the annual Party Cove debauchery.