Thanks to the emergence of mobile sports betting, Indiana saw the amount of money wagered on games and other events in October jump significantly from the prior month. 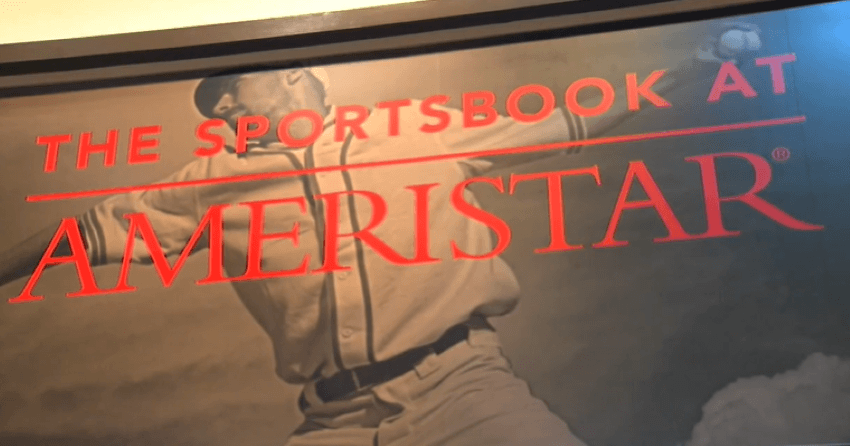 Thanks to its partnership with DraftKings, the Ameristar Casino in East Chicago reported a total sports betting handle of $46.2 million in October, according to the Indiana Gaming Commission. DraftKings, Ameristar’s online partner, accounted for $39.4 million in wagers. (Image: ABC7 Chicago)

While the other 12 sports betting states have yet to report their October figures, the $91.7 million handle for Indiana will likely rank fourth behind New Jersey, Nevada, and Pennsylvania.

Specifically, the increase is due to the arrival of mobile applications, three of which were unveiled last month. The biggest was DraftKings, which reported a handle of nearly $39.4 million. Both DraftKings, a skin for the Ameristar Casino in East Chicago, and Rush Street Interactive’s BetRivers.com launched in Indiana on Oct. 3.

BetRivers, a skin for French Lick Casino’s sportsbook, had a mobile handle of $6.3 million.

FanDuel, which launched its online application on Oct. 22 in conjunction with the Blue Chip Casino, reported accepting $2.4 million in bets for October.

While the handle rose tremendously, the sportsbooks’ adjusted gross revenue could not match that growth. The IGC’s figures show the books’ revenue was $11.5 million, a 34 percent increase from September’s $8.6 million haul.

As a result, the state took in nearly $1.1 million in taxes off the books’ revenues.

Not surprisingly, the retail sportsbooks nearest the major metropolitan areas bordering the state were the top performers.

Horseshoe Hammond, the closest Indiana casino to Chicago, reported a handle of $10.7 million, making it the top brick-and-mortar outlet for the second consecutive month. The next closest, the Ameristar Casino in East Chicago, reported nearly $6.8 million in bets placed.

Hollywood Lawrenceburg, which is 30 minutes away from Cincinnati, reported a handle of $6.9 million.

All three of those sportsbooks posted gains from their reports in September, the first month sports betting was allowed in Indiana.

Not surprisingly, those three casinos rank among the top four full-fledged casinos for adjusted gross revenue. Horseshoe Hammond reported a casino AGR of $33.8 million, while Hollywood Lawrenceburg had a casino AGR of $13.3 million, and Ameristar East Chicago generated $16.1 million

Horseshoe Southern Indiana reported a casino AGR of nearly $16 million after reporting a sportsbook handle of just $1.2 million in October. However, the casino across from Louisville is preparing to make the move to a land-based venue, and has only a temporary venue available on its current riverboat.

A larger sportsbook will be part of the new casino, which will open under the Caesars brand on Dec. 12.

The IGC also breaks down betting action by sport. With football in full swing, bettors wagered $41 million on single-game, in-game, and futures opportunities within college and pro football in October. Through the first two months of sports betting, bets on football total $63.6 million.

Bettors also risked $20.4 million on parlays, which likely includes many football bets. For the first two months, parlays account for $32.4 million in bets.

Bettors gambled $12.3 million on other sports.

Indiana has one more retail sportsbook that will officially open this month. The Rising Star Casino in Rising Sun will celebrate that occasion on Monday. When its opens, the state will have sportsbooks and lounges in 14 casinos, racinos, and off-track betting parlors,