A week after Bob Baffert scored a big victory with Authentic in the San Felipe Stakes, the legendary trainer rolls out another one of his big Kentucky Derby contenders Saturday at Oaklawn Racing and Gaming. 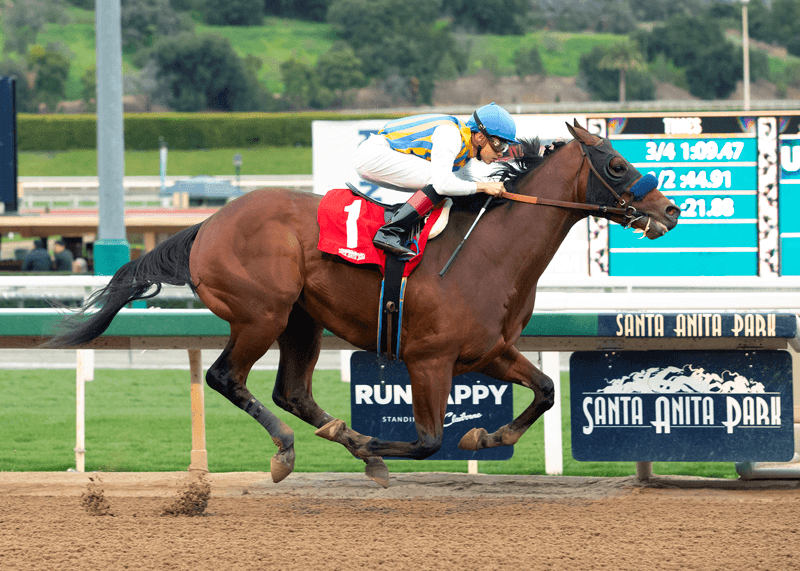 Nadal will look to go 3-for-3 in his young career with a win Saturday in the Grade II Rebel Stakes. (Image; Santa Anita)

Nadal is the 5-2 favorite for the Grade II Rebel Stakes, which will award 50 Kentucky Derby qualifying points to the winner.

The colt didn’t make his racing debut until less than two months ago, when he nearly led wire-to-wire in his maiden race, lengthening his lead at every marker to win by 3-3/4 lengths in the 6-1/2 furlong race. He followed that up with a win in the Grade II San Vicente Stakes last month. In that Santa Anita race, Joel Rosario positioned Nadal directly behind Ginobili throughout the seven furlong race and powered his way to a three-quarters length win in the final strides.

Saturday will be a test for Nadal as it will be his first time to navigate two turns. He’s also stepping up quite a bit in distance, as the Rebel goes a mile and a sixteenth.

The Host Springs, Ark., track has been hit by rain for most of the weekend, and forecasts call for more leading up to the 6:23 pm ET post time.

He’s a big, strong horse,” said Baffert. “Hope we don’t get too much bad weather. I would like to see what he does on a dry track, but it’s all out of my hands.”

This wouldn’t be the first time Baffert’s taken a colt unraced as a 2-year-old and turned him into a legitimate Derby contender. Justify didn’t race until he turned 3 and became a Triple Crown winner.

The Baffert colt drew the inside gate in the field of eight, and while he’ll likely be bet down from his opening 5-2 line regardless of the weather or track conditions, there appear to be several challengers who may be available at a quality price.

Basin hasn’t raced since September when the Steven Asmussen-trained colt win the Grade I Hopeful Stakes, but the trainer said his colt has been looking like a Grade I winner in his recent workouts. Javier Castellano will get the mount.

Two horses have 7-2 morning-line odds. That includes Three Technique, who will make his graded stakes debut and has two wins and three seconds in five starts. Luis Saez will get the mount Saturday and be the third jockey to ride the colt trained by Jeremiah Englehart.

The other 7-2 horse is Silver Prospector. Another Asmussen horse, Silver Prospector has two graded stakes wins under his belt, including one over Tiz the Law at Churchill Downs in November’s Grade II Kentucky Jockey Club Stakes. However, he also has had some so-so races, including a fourth-place finish in Oaklawn’s Smarty Jones on Jan. 24, although he followed that up three weeks later with a win in the Grade III Southwest Stakes.

Ricardo Santana Jr. gets the mount on Silver Prospector, who will break from the fourth gate. Basin will break to his inside at third, and Three Technique drew the sixth gate.

The full field and odds can be found here.

Another Derby prep will take place at Turfway Park, although the Grade III Jeff Ruby Stakes doesn’t feature nearly the quality Derby candidates as the Rebel.

A field of 11 will run Saturday evening, and the best horses appear to be on the outside. The winner will get 20 Derby qualifying points.

Invader will make his graded stakes debut and has won his last two races, both of which came at the northern Kentucky track. That includes a six-and-a-quarter length win in the John Battaglia Stakes on Feb. 14. Albin Jimenez gets the mount on the Wesley Ward-trained colt.

He’ll break from the 10th gate and is the morning-line favorite at 3-1.

To his outside is Field Pass, a Michael Maker-trained colt who has graded stakes experience but just two wins and two seconds in seven starts. He is, though coming off a win in the Feb. 1 Dania Beach Stakes at Gulfstream Park. He was two lengths back in fifth at the top of the stretch before rallying at the wire to win by a neck.

Irad Ortiz Jr. gets the call on Field Pass, who has morning-line odds of 7-2.

The full field and odds can be found here.