One month from Saturday is Selection Sunday, the day we’ll know who makes the field for the NCAA men’s college basketball tournament. And the one thing we know already is that this year’s Big Dance will be one of the most unpredictable tournaments in recent memory. 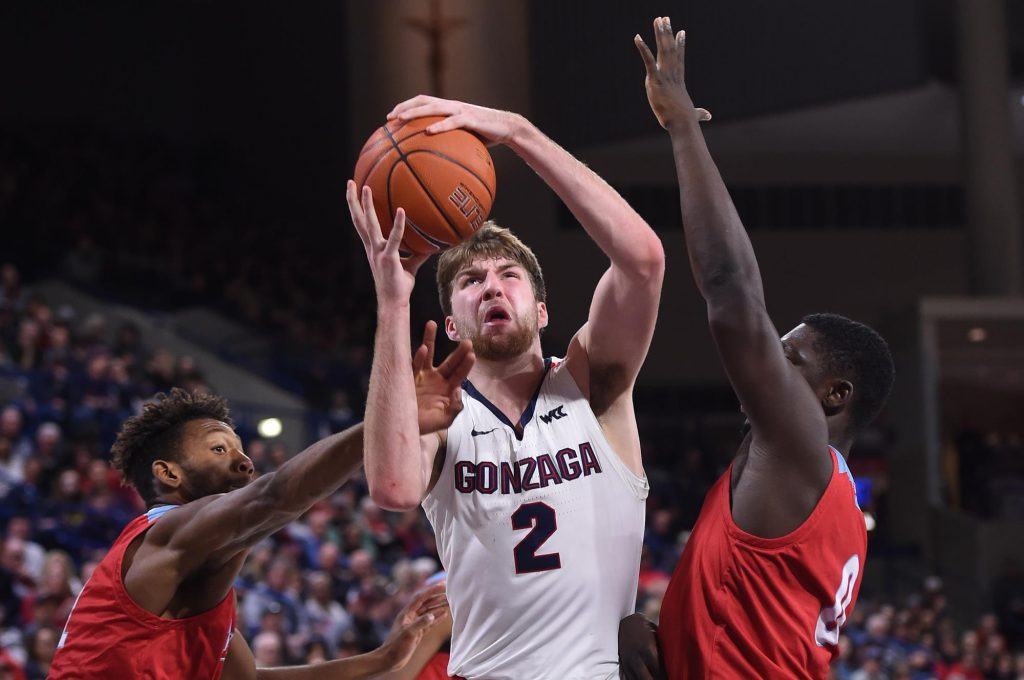 Gonzaga has muscled its way to the top of the board as the favorite for the NCAA men’s basketball title at most oddsmakers this season. (Image: Gonzaga Athletics)

The current odds posted at four sportsbooks six or seven teams have odds of +1500 or shorter, indicating there is not a dominant team this season that most expect can run away from the pack come March.

The current favorites among the lead pack for the title are Gonzaga and Kansas. FanDuel lists both squads at +900 each, while Caesars offers them at +700 apiece. DraftKings has Gonzaga at +800 and Kansas at +900, while PointsBet has those odds flipped.

After that, the sportsbooks have Baylor, currently the top-ranked team in the nation, and Duke. Baylor’s odds range from +900 at PointsBet to +1100 at DraftKings, with Caesars and FanDuel listing the Bears at +1000. Duke, meanwhile, is available at +800 at Caesars and +1100 at FanDuel, DraftKings, and PointsBet.

Louisville and Dayton highlight the next tier, and oddsmakers are more consistent with those two schools. FanDuel and DraftKings both have the two schools at +1500 each. PointsBet offers them – and Maryland – at +1600. Caesars offers Louisville at +1500, along with Michigan State and San Diego State. San Diego State is the nation’s last undefeated team at 24-0 entering Saturday.

This year may very well be a year when a value pick wins the NCAA tournament, and if you look around, you may be able to find a possible title contender at a very nice price.

Take Kentucky, for example. The Wildcats have had some head-scratching losses before beginning conference play, but of late, the Wildcats seem to find ways to win games late. That’s not a bad thing to know how to do come March. The Cats beat Louisville in late December, and their only losses in SEC play have been at South Carolina (on a last-second shot) and at Auburn. Neither of those can be considered bad losses.

Over the past month, UK has played road games at Arkansas, Auburn, Texas Tech, and Tennessee. They’re 3-1 in those contests.

This is something for us,” Kentucky coach John Calipari said after the Tennessee win on Feb. 8. “We’ve had four ridiculous environments like this in a row, four weekends in a row, and I’m still alive.”

UK’s odds range from +1800 at Caesars to +2200 at PointsBet, with DraftKings and FanDuel offering +2000. Those odds are more than double, or nearly triple, what they were at the start of the season.

Speaking of Auburn, one of last year’s Final Four teams could just find its way back there, and their odds range from +2500 at Caesars to +3000 at FanDuel, with PointsBet and DraftKings listing the Tigers at +2800.

Another team to keep an eye on is Florida State, while Duke and Louisville grab most of the attention in the ACC, the Seminoles are right there with them at the top of the league standings. FSU also has a win at Louisville and nearly beat Duke on the road, too. Their odds range from +2000 at DraftKings to +3000 at Caesars. FanDuel (+2400) and PointsBet (+2500) are in between.

If you’re looking to bet on something other than just a NCAA Tournament winner, DraftKings, FanDuel, and PointsBet all have something to offer.

DraftKings is offering odds on which teams will make the FinalFour, and no teams are lower than even money as Gonzaga is that favorite at +100.

FanDuel is taking bets on which teams will end up as No. 1 seeds a month from now, with Gonzaga the -400 favorite and San Diego State next at -200.