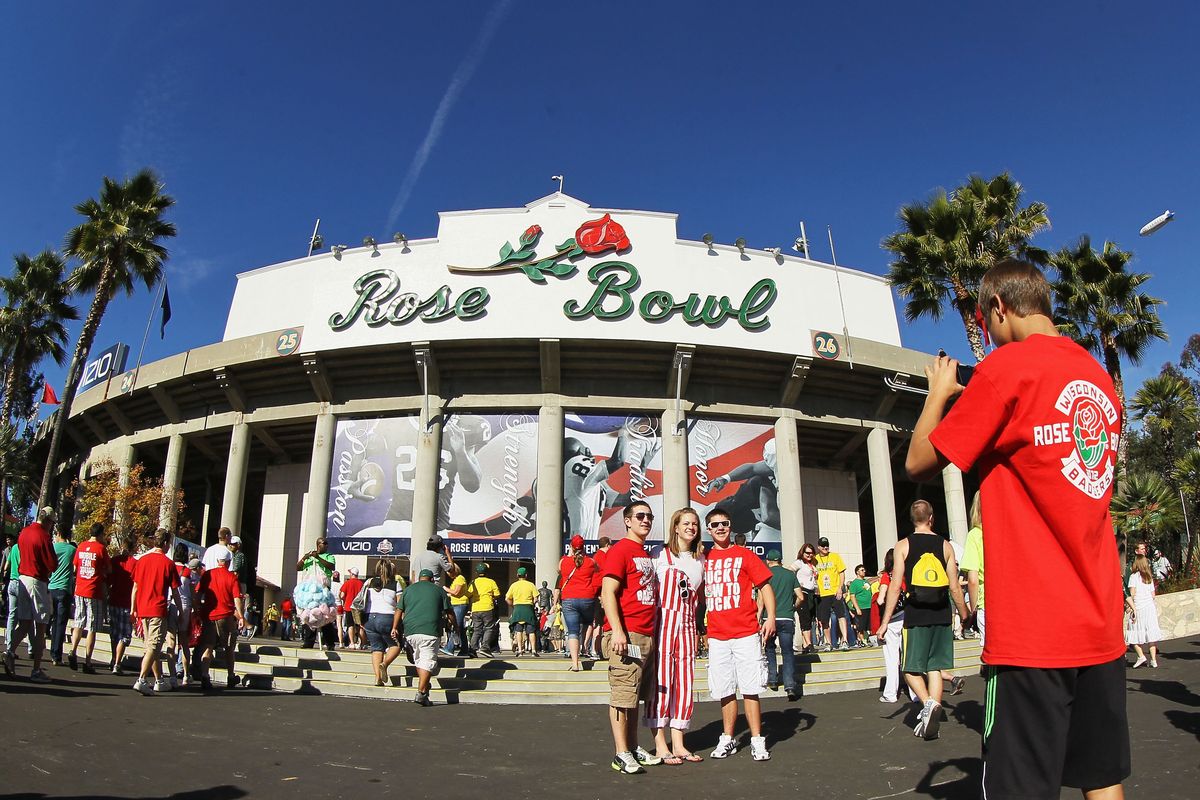 Wisconsin is heading back to the Rose Bowl for the first time since the 2012 season to face Oregon. It’s one of the New Year’s Six bowl showdowns. (Image: Bucky’s 5th Quarter)

The two College Football Playoff National Championship semifinals will be contested December 28 between No. 1 LSU vs. No. 4 Oklahoma, and No. 2 Ohio State vs. No. 3 Clemson. Respectively, those games are the Peach and Fiesta bowls, two of the New Year’s Six.

While the four others won’t have national championship implications, there’s much on the line for the eight programs. From a Top 10 final ranking, to justifying one conference’s claim that the so-called Power 5 should be a Power 6, the 2019 New Year’s Six is poised to bring both holiday cheer and gloom.

No. 10 Penn State (10-2) was hoping for a Rose Bowl appearance, but ended up with the Cotton Bowl following Wisconsin’s strong performance against OSU in the Big Ten Championship. The Nittany Lions will play No. 17 Memphis (12-1) at AT&T Stadium in Arlington, Texas, at 12 noon ET to kick off the New Year’s Six.

The early odds have Penn State favored by a touchdown. The vast majority of all bets – 84 percent – have been wagered on the Nittany Lions.

“My feeling is this conference has been undervalued and disrespected since the CFP began,” Aresco opined.

Virginia snuck into the ACC Championship after finally topping state rival Virginia Tech for the first time in 15 years. But the Cavaliers were no match for Clemson, and they’ll face another steep challenge in the Gators.

Seventy-nine percent of the bets placed so far have been on the favorites.

The spread could change should more Gators follow junior cornerback CJ Henderson in declaring for the NFL Draft and skipping the Orange Bowl. Florida coach Dan Mullen, however, said he doesn’t expect any other players who are expected to enter the draft to bypass the bowl.

The Pac-12 champs annulled Utah’s chances at a playoff berth in their conference championship game. The Badgers are led by Jonathan Taylor, the consensus best running back in college football.

This Rose Bowl will be a rematch of the 2012 game where Oregon beat Wisconsin 45-38.

The Badgers open as a slim favorite, spotting the Ducks 2.5 points. The bets are more relatively split here, with Oregon attracting 55 percent of the action.

The Sugar Bowl is the sweet finish to the New Year’s Six, pitting No. 5 Georgia (11-2) against No. 7 Baylor (11-2). Both teams had shots at the playoff, but Georgia’s loss to LSU in the SEC Championship, and Baylor’s defeat to Oklahoma in the Big 12 Championship, eliminated their candidacies.

Both teams have quarterback issues. Georgia’s once reliable Jake Fromm has struggled lately, and Baylor is hoping Charlie Brewer can recover from an injury that knocked him out of the Big 12 Championship in the first half.

As of now, Georgia is a 7.5-point favorite. However, 70 percent of the early bets wagered have been on the underdogs.