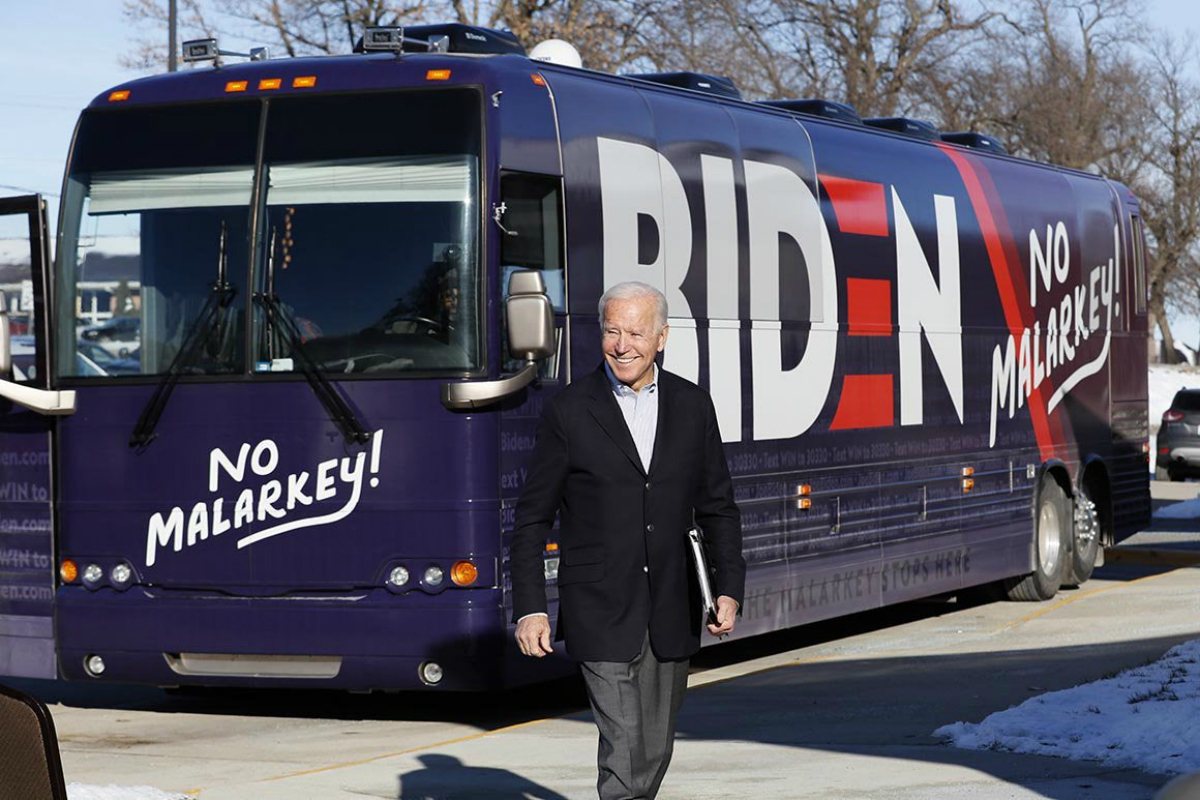 Joe Biden arrives in Iowa with a new campaign message he hopes will resonate with voters young and old. (Image: Charlie Neibergall/AP)

The 77-year-old has embarked on an eight-day tour across Iowa, with the new campaign slogan, “No Malarkey!” emblazoned on his bus.

Biden’s trip commences with a slew of enthusiasm, as bettors continue to purchase shares on him winning his party’s 2020 nomination to take on incumbent President Donald Trump. PredictIt bettors have his 2020 Democratic Party shares at 27 cents. That’s up a nickel from 30 days ago.

No Obama, No Problem

Biden welcomed media on the bus to discuss his campaign plans in Iowa and other key early primary states.

Asked about his decision to tell former President Barack Obama not to endorse him, and whether that might change, Biden explained, “No, because everyone knows I’m close with him.”

Biden’s “No Malarkey” campaign motto received both praise and criticism. Proponents say it’s unique, will garner much media attention – good and bad – and is identifiable with Biden, as he’s said the word countless times during his political career.

Others argue it’s a dated word that shows his age. Late-night comics had fun with the tagline.

“Who says politicians are out of touch?” Jimmy Kimmel asked with a laugh. “It’s like Grandpa-palooza is on. Good news for Billy Bush: This is now the No. 1 most embarrassing thing involving a candidate and a bus.”

Daily Show host Trevor Noah added, “Unless you’re over the age of 80, malarkey is a term you definitely had to Google.”

Biden countered, “It’s aptly named. The reason we named it ‘No Malarkey’ is because the other guys all lie.” Merriam-Webster defines malarkey as “insincere or foolish talk.”

Iowa will be first to vote on who should be the Democratic nominee to take on Trump. The state heads to the polls on February 3.

The Real Clear Politics polling average shows Buttigieg with a 5.7-point lead in the Hawkeye State. On PredictIt, the 37-year-old has a commanding lead, with his shares of winning Iowa at 39 cents. Sanders is a distant second at 24 cents, and Warren third at 18 cents. Biden is fourth at just 13 cents.

Following Iowa, New Hampshire residents vote. Buttigieg is also in the lead there, with a three-point RCP advantage. However, PredictIt bettors have Sanders winning his neighboring state – his shares are at 37 cents, and Buttigieg second at 27 cents.

Nevada and South Carolina are the final two primaries before Super Tuesday. RCP has Biden with a nine-point lead in Nevada and 19-point advantage in South Carolina. He’s also dominating PredictIt shares in those states (31 cents and 66 cents).