Just over 150 years to the day that it played in the first college football game, Rutgers has once again found a way to make history in the sport as the Scarlet Knights get set for Ohio State. 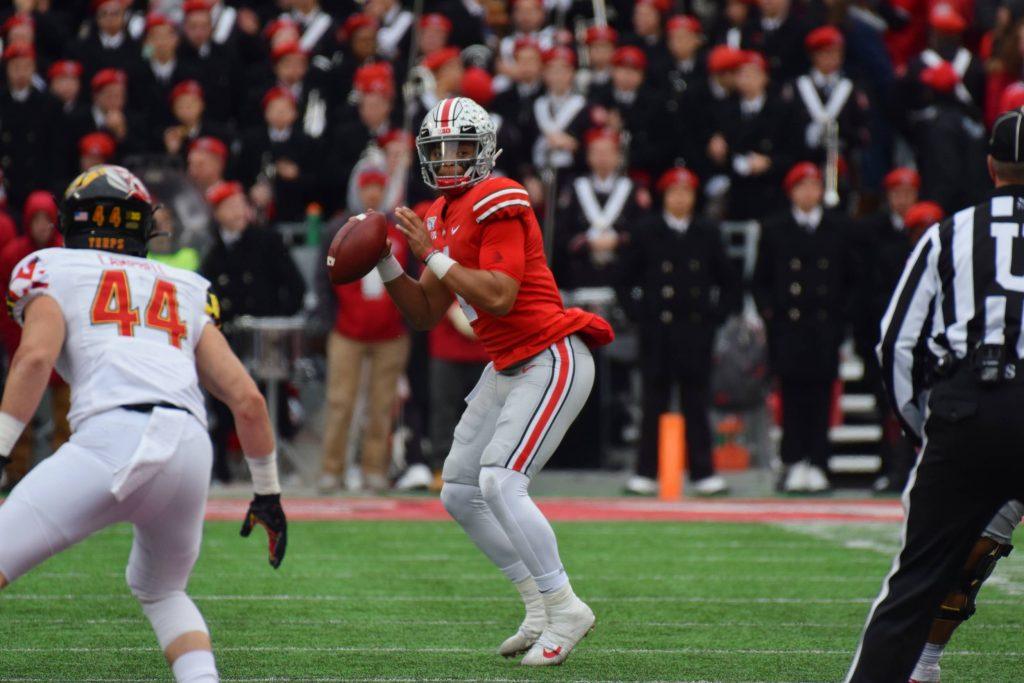 Quarterback Justin Fields leads Ohio State into Rutgers on Saturday, where the visiting Buckeyes will be 53-point favorites against the Scarlet Knights. (Image: Ohio State University)

On Saturday, the State University of New Jersey welcomes the Buckeys, the No. 2 team in the Associated Press poll, to SHI Stadium in Piscataway for a college football game that will be one for the books, be it sportsbooks or history books.

The visiting Buckeyes (9-0) enter as 53-point favorites at William Hill’s US sportsbooks. That is the largest spread for a road favorite in college football history. There’s also ridiculous moneyline odds available too.

According to TeamRankings.com, no team has been a 53-point favorite, although several have given more points. For teams spotting 53.5 or more points, their record against the spread is 10-15-1 since 2003.

Over at William Hill, bettors aren’t backing away from the big number, even if Ohio State defensive end Chase Young will sit out against Rutgers. The sportsbook reported that through Thursday, 75 percent of all point spread tickets written for the game were for the Buckeyes to cover. Those bets accounted for 94 percent of the money wagered on the game. Through Sarturday, Ohio State still accounted for 71 percent of spread bets and 78 percent of money on the spread.

Since failing to cover as a 27-point favorite to Florida Atlantic to start the season, Ohio State has covered in its last eight games. Meanwhile, the Scarlet Knights (2-7) have covered just twice in their nine games this season.

Since the game is in New Jersey, unfortunately bettors in that state will not be able make a wager unless they want to travel to neighboring Pennsylvania or upstate New York.

The game is scheduled to kickoff at 3:30 pm ET.

Here’s a look at the betting action on some other big games on Saturday’s college football schedule.

Staying in the Big Ten, a much more competitive game is set to take place in Iowa City as No. 23 Iowa hosts undefeated and seventh-ranked Minnesota. The visiting Golden Gophers (9-0) are coming off a big win against Penn State last week, but oddsmakers like the host Hawkeyes (6-3).

Iowa is a 3-point favorite at most sportsbooks, but bettors over at FanDuel are split on the game. According to numberFire.com, 56 percent of point spread bets on the game are for Minnesota. However, Iowa bettors account for 55 percent of the money bet on the spread.

The moneyline, though, is a different story. FanDuel is offering the Golden Gophers at +130, meaning a $100 bet would net $130. That’s attracted 86 percent of all moneyline bettors on the game and 79 percent of the cash bet on the moneyline.

That game will kickoff at 4 pm ET

The line started at 9.5 points in favor of Notre Dame, but it has since slipped to a 7-point spread at most sportsbooks.

The lower line has attracted more Fighting Irish bettors as 60 percent of the spread bets at FanDuel have been for the favorites. That accounts for 69 percent of the money wagered.

Notre Dame is currently listed at -290.

The Irish and Midshipmen will play at 2:30 pm ET.