House Speaker Nancy Pelosi has named her chamber’s prosecuting team that will make the Democratic Party’s case as to why President Donald Trump should be ousted from office. 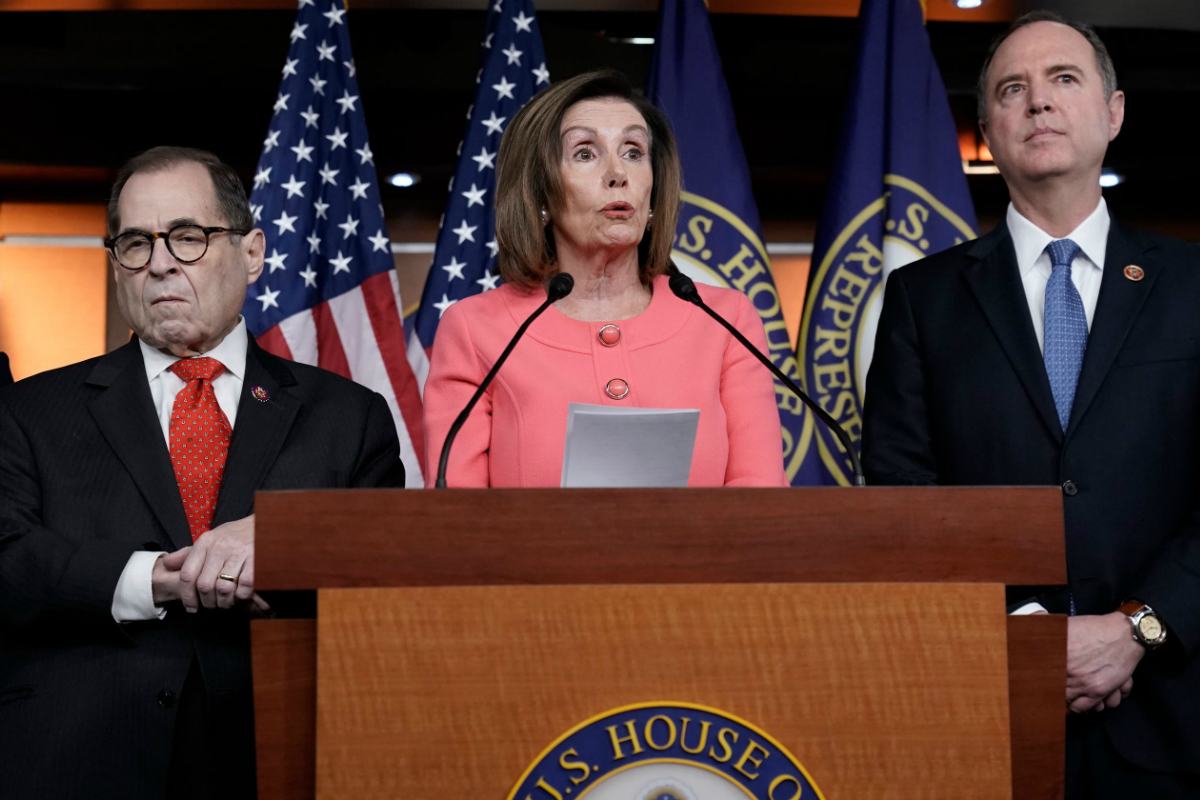 Speaker Pelosi, flanked by her impeachment prosecutors, is taking the House’s case to the Senate. (Image: J. Scott Applewhite/AP)

They will be supported by five managers: Reps. Hakeem Jeffries of New York, Sylvia Garcia of Texas, Val Demings of Florida, Jason Crow of Colorado, and Zoe Lofgren of California. The AP says each manager has legal, law enforcement, and/or military courtroom experience.

“Today is an important day,” Pelosi said. “This is about the Constitution of the United States.”

The appointments mean bettors who owned PredictIt shares of Pelosi publicly announcing the team between January 13-19 are winners. The PredictIt market opened soon after Trump was impeached in December. January 6-12 was the early frontrunner, but Jan. 13-19 had the second-shortest odds.

The president will be defended by his White House counsel Pat Cipollone. For a detailed explanation as to how the impeachment trial will proceed in the Senate, visit our article from December 24.

It’s been 28 days since the House of Representatives voted to charge the president with two crimes warranting his removal from the White House. Democrats voted that Trump is guilty of abuse of power and obstruction of Congress.

Not a single Republican voted in favor of either charge. Just five Democratic votes were cast against the charges.

That’s why the Republican-controlled Senate, which acts as the jury in the impeachment case, isn’t expected to convict Trump on either charge. The GOP holds a 53-seat majority in the upper chamber.

The PredictIt market asking, “Will the Senate convict Donald Trump on impeachment in his first term?” has “Yes” shares at just nine cents.

Here we go again, another Con Job by the Do Nothing Democrats. All of this work was supposed to be done by the House, not the Senate!” Trump tweeted.

Pelosi’s appointments come as the President and China signed the first phase of their trade deal in the White House. The agreement mandates China purchase more than $200 billion worth of American goods and services over the next two years. The announcement sent markets up on Wednesday afternoon.

As for November’s election, Trump remains the frontrunner. The market, “Who will win the 2020 US presidential election?” has the President’s shares at 51 cents. Former VP Joe Biden is a distant second at 22 cents. Vermont Sen. Bernie Sanders is third at 20 cents, and billionaire Michael Bloomberg fourth at seven cents.

Even when consolidating the Democratic nominees, the market, “Which party will win the 2020 US presidential election?” has GOP shares at 52 cents.