Earlier this week, the Breeders’ Cup released a report that stated there were opportunities to remove Mongolian Groom from racing in the Breeders’ Cup Classic, and that the 4-year-old gelding received “extra scrutiny” before suffering a fatal injury in the Nov. 2 championship race at Santa Anita Park. 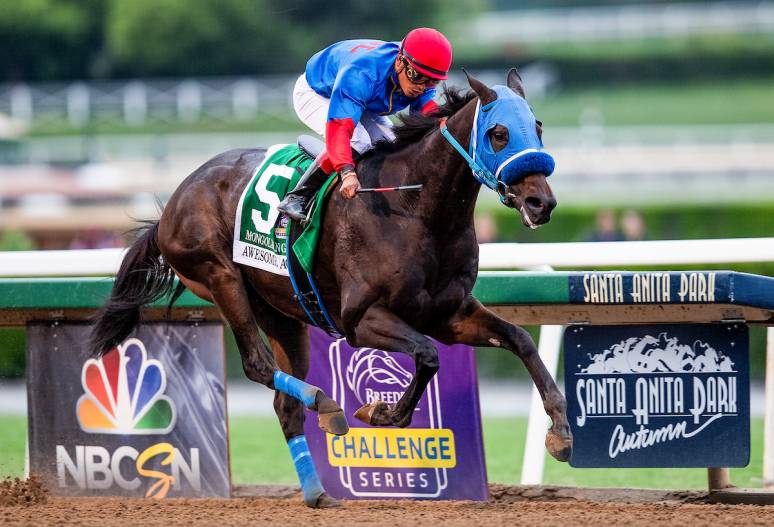 Mongolian Groom, seen here in a previous race at Santa Anita, was put down at the California track after sustaining a broken left hind leg in the Nov. 2 Breeders’ Cup Classic. A report requested by the Breeders’ Cup said opportunities were missed that could have scratched the horse from the race. (Image: Eclipse Sportswire/Breeders Cup)

The 25-page report penned by Dr. Larry Bramlage, a veterinary orthopedic surgeon at Rood and Riddle Equine Hospital in Lexington, Ky., gave six recommendations for improving the process he said had a 99.6 percent accuracy rate. However, it was in the Classic, the final and biggest race of the two-day event, where Mongolian Groom pulled up at the top of the stretch after breaking his left hind leg.

Bramlage said the horse had small stress fractures behind both of his hind cannon bones, but they did not cause any inflammation prior to the race.

A little more than one mile into the race the left hind fracture propagated, resulting in the chain of events, like dominoes falling, that created the fatal injury,” the report stated. “There is no evidence that the horse’s injury was ignored or covered up.”

A copy of the report can be found here.

Veterinarians examined 252 horses repeatedly in the days ahead of the races, as well as on race days. Those doctors scratched 13 horses, with 11 others withdrawn by the connections. During an on-track exam on Oct. 31, examining vets noted his left hind leg as “questionable.”

Later that day, a video surfaced online showing some lameness in his left hind leg while he jogged. While the notes from the early exam led to six more exams, none of the team had a chance to see the footage. Bramlage blamed a review process stymied by time constraints.

“This was a missed opportunity,” he noted.

Bramlage gave six recommended process improvements to better identify horses like Mongolian Groom that have injuries that could become catastrophic if allowed to race. One them was to have fewer veterinarians see the horses more often leading up to the race. Seven veterinarians observed the horse a total of 10 times.

“The fact that he had so many exams points out that the examining veterinarians had targeted him for extra scrutiny,” he noted.

He also called on officials to designate an area in the barns for future Breeders’ Cups where horses that received extra scrutiny, like Mongolian Groom, could jog. That would allow vets to get a better sense for the injury. In the 2019 Breeders’ Cup, that would have meant about two dozen horses to receive this additional evaluation.

Fred W. Hertrich III, the chairman of the Breeders’ Cup Board of Directors, said in a statement that the board would review and discuss the report at its next meeting.

PETA, however, was more critical of the report, especially in refuting a claim that CT equipment does not yet exist that could have helped identify Mongolian Groom’s injuries. Kathy Guillermo, the organization’s senior vice president, said in a statement the group called on the racing industry to conduct a trial with the imaging device five years ago.

Track Surface Not Likely a Factor

The southern California track has received constant criticism over the past year, as nearly 40 horses have died there since late December 2018. Track officials even suspended racing for three weeks last March to investigate the track surface and delve deeper into possible causes for the deaths.

However, Bramlage said the track did not appear to play a factor in Mongolian Groom’s death.

He noted that there had not been any significant amount of rainfall in the Los Angeles area in the lead up to the Breeders’ Cup. During the shutdown, Santa Anita rebuilt its dirt track. The only complaint from some horsemen leading up to the Breeders’ Cup was the track’s depth. But no one complained of any inconsistencies along the track.

“Santa Anita had shown itself to be a safe racing surface since renovation,” Bramlage said.

After the Breeders’ Cup, Santa Anita resumed racing when its winter-spring meet began on Dec. 28. Two deaths, one in training and one race-related, happened in that first week.