Seattle Seahawks QB Russell Wilson said Monday night’s showdown with the undefeated San Francisco 49ers was the “craziest game I’ve ever been a part of.” 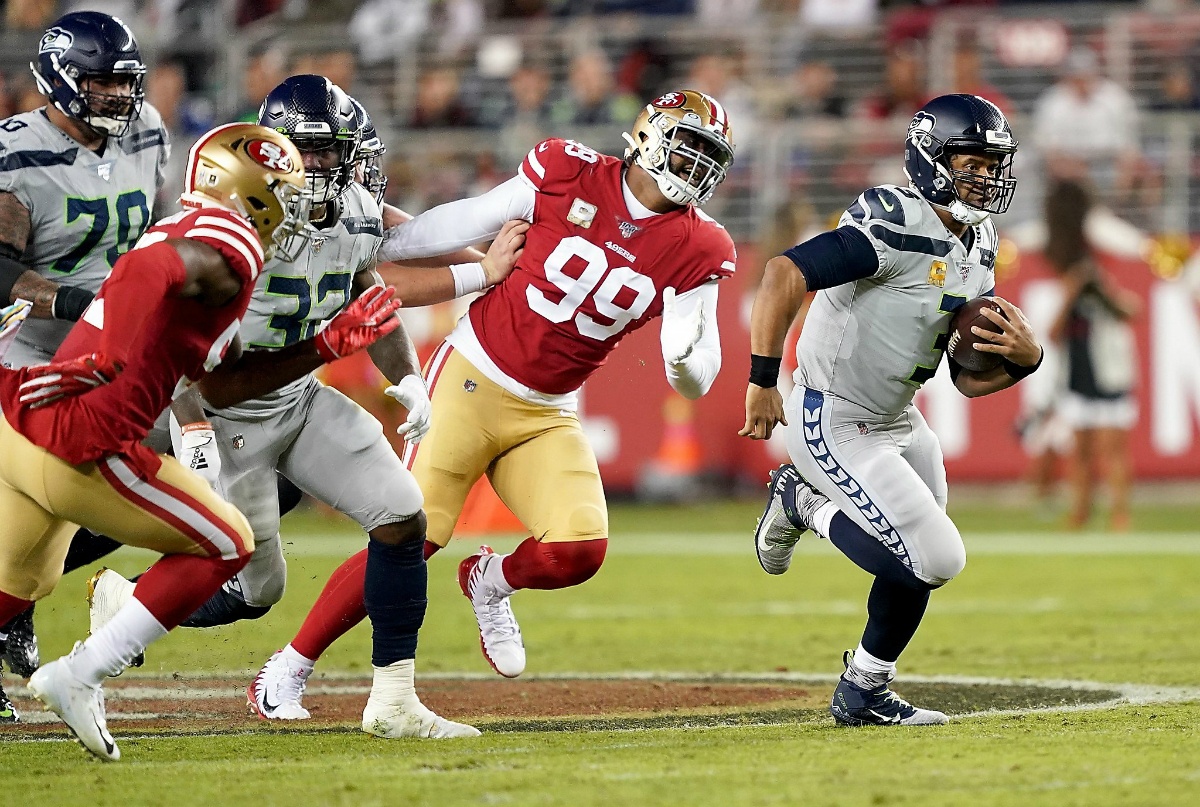 Russell Wilson and the Seattle Seahawks were the first team able to top the San Francisco 49ers this season. (Image: Thearon W. Henderson/Getty)

For NFL fans, it was a heck of a back-and-forth ride. The game went into overtime, where Wilson threw a rare interception, but then a missed field goal by San Francisco backup kicker Chase McLaughlin gave the ball back to the Seahawks.

It’s never smart to give the 30-year-old Wilson another chance at winning a game.

On third-and-three and time ticking down, Wilson managed to escape the pocket and scramble for 18-yards. The first down he achieved would set up Seattle kicker Jason Myers, who redeemed himself from misses a week earlier by splitting the uprights on a 42-yard field goal.

The Seahawks’ 27-24 win over the 49ers was yet another Week 10 upset, as the home team was favored by six points. It was a good result for bettors, as the majority of the money was wagered on Seattle.

Wilson went 24-34 for 232 yards, one touchdown, and the OT pick. He also ran for 53 yards, including the critical 18-yard last-minute escape.

Russell Wilson is the best quarterback in the league,” Seahawks left tackle Duane Brown opined after the game. “When you have him under center, I don’t care how much time is on the clock. We feel like we have a chance.”

With the 49ers’ loss, there are now zero unbeaten NFL teams. Before last night’s game, FanDuel had San Francisco’s odds of going a perfect 16-0 in the regular season at +1100 (implied odds of 8.33 percent).

“Everybody is pretty disappointed,” Niners linebacker Fred Warner said. “But at the same time, this loss is not going to define us. We have an extremely tight-knit group.”

San Francisco hosts the Arizona Cardinals on Sunday, and then has a difficult stretch that includes the Packers, at the Ravens, and at the New Orleans Saints. The combined record of the three latter teams is 22-6.

After a bye week, the Seahawks will play at the Eagles, host the Vikings, and then play at the Rams. Those three teams have a combined record of 17-11.

The Cincinnati Bengals remain the last winless team in the NFL. Before Week 1, oddsmakers had the team’s regular season over/under win total at six games. Cincy needs to win out for the over to win.