The US Senate late on Wednesday night unanimously passed the third phase of the country’s COVID-19 relief package, a more than $2 trillion stimulus proposal designed to help businesses and workers get through the coronavirus pandemic that has brought nearly the entire nation to a standstill. 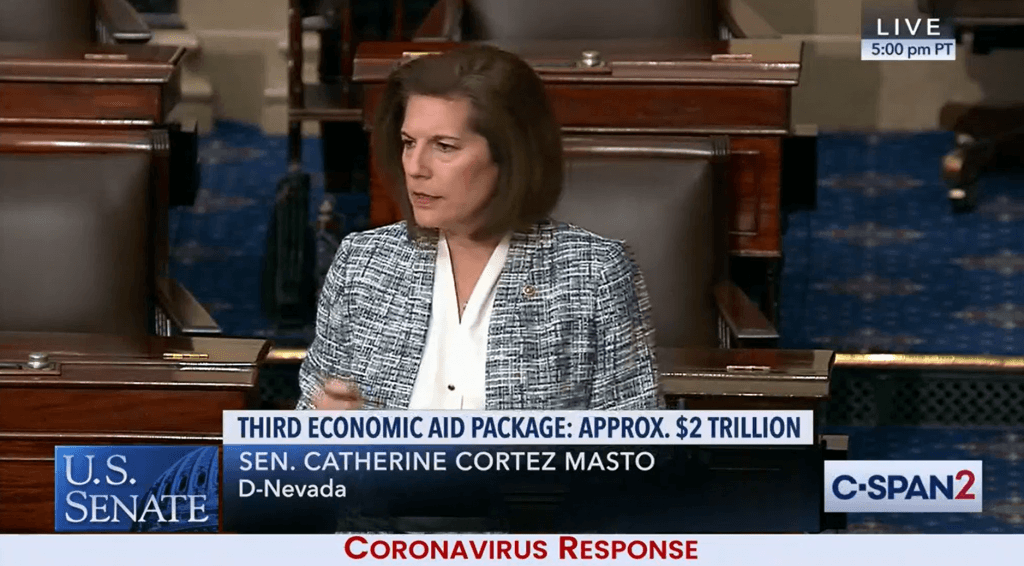 The bill is designed to help businesses of all sizes, many of which are completely shut down due to state attempts to control the spread of the virus, as well as millions of workers who face economic uncertainty as their positions have either been furloughed or terminated.

Among the industries that pushed hard for the massive relief bill was the gaming industry, which joined forces with other businesses in the travel and tourism and hospitality sectors that have been forced to close in recent weeks.

Nevada has an economy that’s unique in the nation,” US Sen. Catherine Cortez Masto (D-Nev.). “Our hospitality industry generates nearly $68 billion annually and supports more than 450,000 jobs across the state. So, I have been focused on standing up for our gaming, tourism, and hospitality workers.”

One of the provisions aimed to support workers caused a delay in the vote as several lawmakers debated the merits of a federal unemployment extension that would give those out of work an extra $600 weekly benefit for four months. Some Republican lawmakers felt the benefit would have given some people who make less money working an incentive not to find a job.

However, an amendment seeking to cap that benefit failed to get the 60 yes votes needed to make the change. Moments later, the senators voted 96-0 to pass a bill that members on both sides of the aisle felt was far from perfect. However, given the emergency at hand, they admitted that it needed to proceed as quickly as possible in order to boost an economy teetering on a recession.

Four Senators missed the vote because they were self-quarantining or ill. That included US Sen. Rand Paul, who announced on Sunday he tested positive for the coronavirus.

There are many aspects of the COVID-19 phase three bill that can give a boost to the gaming industry. Of the 989 commercial and tribal casinos in the US, all of the commercial casinos have been closed and only a handful of tribal venues remain open. As a result, 650,000 casino workers have either been furloughed or laid off due to the coronavirus outbreak.

Besides giving those on unemployment an extra $600 per week for 16 weeks, the bill also extends the length of time a person can receive standard unemployment from 26 weeks to 39 weeks. In addition, independent contractors, who previously were unable to claim unemployment, will be able to file for benefits.

Eligible taxpayers will get the credit as a direct rebate either into their bank accounts or by a paper check.

Gaming companies, along with other businesses across various sectors, will be eligible to receive funding from a $454 billion pool that’s in the Senate’s COVID-19 relief bill. The funds could be used for loans, loan guarantees, and other investments utilized by the Treasury Secretary and the Federal Reserve. Companies that get money from this will have some restrictions, including bans against stock buybacks and executive pay increases.

The bill also allows employers to defer their share of the payroll tax for up to two years and carryback net operating losses over the previous five years. Companies will also receive a tax credit for retaining employees equal to half of each worker’s salary. That includes tipped employees.

“Workers who have already lost their jobs due to this crisis can be rehired and paid under our program, and that should be our goal,” US Sen. Susan Collins (R-Maine) said on the floor Wednesday night.

Next Steps and Gaming Reaction

The Senate’s COVID-19 relief bill now moves to the House, which is expected to pass the emergency spending package, unprecedented in size, by the end of the week. It will then go to President Trump, who earlier in the day, signaled yet again he would quickly sign the bill into law.

In a statement to Casino.org, Kevin Gerson, communications director for US Rep. Dina Titus (D-Nev.) said the bill has many items the gaming industry has supported and that Titus, who serves as the co-chair of the Congressional Gaming Caucus, will work in the House to ensure those provisions stay in for the industry and its workers.

Congresswoman Titus will continue to ensure that the recovery puts families first and makes sure that people in Las Vegas have a job to return to when this crisis is over,” he said.

In a statement released shortly after the Senate’s vote, American Gaming Association President and CEO Bill Miller thanked the Senate for its bipartisan approach to protect jobs and businesses during the coronavirus pandemic. He also urged the House to act quickly to help those in the industry currently out of work.

“If the industry remains shut down for two months, it will jeopardize the livelihoods of those individuals as well as the 17,000 gaming supplier jobs and 350,000 American small business workers supported by the gaming industry,” he said. “In total, shutting gaming down for two months will cost the American economy $43.5 billion in lost economic activity, underscoring the need for swift action.”