Two horses will likely earn their way into the field for the Kentucky Derby on Saturday as the Fair Grounds Race Course will run two divisions of the Grade II Risen Star Stakes. 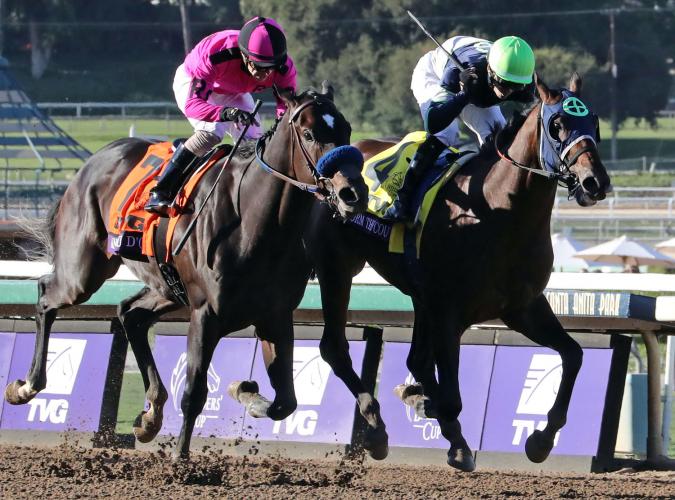 The Derby prep race down in New Orleans drew 23 horses, prompting the Churchill Downs-owned track to split the field into two races. Both will be run at 1-1/8 miles. In addition, both divisions will serve as the first two qualifying races where the winners will receive 50 points toward earning an entry in the May 2 Run for the Roses. Second-place finishers will get 20, with 10 going to the third-place horse and five going to the horse finishing fourth.

How big would it be to get 50 points? That’s exactly how many Country House, last year’s Kentucky Derby winner, had during his entire prep campaign. That total was good for 17th in the points standings, and up to 20 horses are eligible to run in the first leg of the Triple Crown.

The two divisions will cap a 13-race card at the Fair Grounds on Saturday. Post time for the first division will be 6:38 pm ET, with the final half scheduled to run at 7:12 pm ET.

The first division of the Risen Star appears to be the most competitive, with more contenders for the Kentucky Derby. In drawing for the divisions, the horses that ran in the top three in last month’s Lecomte Stakes at the Fair Grounds ended up there. Enforceable, ridden by Julien Leparoux, won the Lecomte by a length-and-a-half over Silver State and Mr. Monomoy.

Enforceable, trained by Mark Casse, went off at odds of nearly 7-1 in the Lecomte, but he’ll be the 7-2 morning-line favorite in the first division. In the field of 11, Enforceable will break from the eighth gate.

Silver State, trained by Steven Asmussen and ridden by Ricardo Santana Jr., will break from the second post and starts with morning-line odds of 4-1. Mr. Monomoy, trained by Brad Cox and ridden by Florent Geroux, has 6-1 odds and will start from the ninth gate.

Joining that trio as the primary contenders in the race will be a pair of colts making their stakes debut.

Blackberry Wine and Digital last raced in an allowance optional claiming race on the Jan. 18 undercard of the Lecomte Stakes. Blackberry Wine beat Digital by a length. The Joe Sharp-trained colt led early but lost the lead at the stretch before Adam Beschizza guided the colt to rally in the final furlong.

Changes in Store for Anneau d’Or

Initially, the second division was going to feature 12 horses, but Truculent was scratched.

Oddsmakers believe the race will likely come down to two horses.

Anneau d’Or, trained by Blaine Wright, will make his 3-year-old debut Saturday. He’s raced three times, and since winning in his maiden race, he’s posted back-to-back second-place showings in the Breeders’ Cup Juvenile and the Los Alamitos Futurity. He lost those races by a head and a neck respectively.

In my opinion, we were a head and a neck away from winning an Eclipse Award” for champion 2-Year-Old, Wright said in a release. “We have to find a way to get past horses. Joel Rosario flew up (to Northern California) and worked him and got to know him. Hopefully the changes will work out to our advantage.”

Anneau d’Or, who will also wear blinkers for the first time, will break from the eighth gate. Oddsmakers set hs morning-line odds at 9-5.

Trained by Ralph Nicks, Liam’s Lucky Charm has three wins in six starts and has never finished out of the money. But Saturday will mark his graded stakes debut. On Jan. 18 at Tampa Bay Downs, he won the seven-furlong Pasco Stakes, pulling away to a five-and-a-half length win under Edgard Zayas.

Liam’s Lucky Charm breaks from the fourth gate and will start with odds of 9-2.