Los Angeles County District Attorney Jackie Lacey announced on Thursday that her office would not file any criminal charges in the wake of more than three dozen horse deaths that have occurred at Santa Anita Park in the past year. 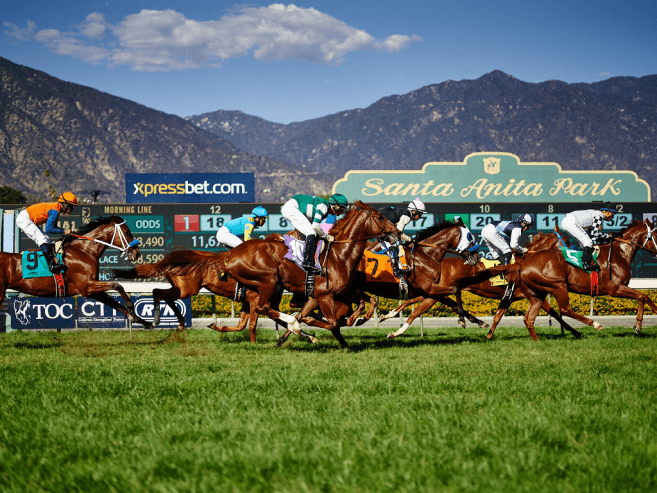 A task force commissioned by the Los Angeles County District Attorney’s Office released a report Thursday stating it could not find criminal evidence of animal abuse or other wrongdoing in the deaths of racehorses at Santa Anita Park. (Image: Santa Anita Park)

A task force Lacey impaneled could not find enough evidence to pursue cases of animal cruelty, such as wittingly racing an injured horse, or other unlawful activity against owners, trainers, or jockeys. It also found no evidence to back claims that track officials coerced trainers and jockeys into racing when concerns were raised about weather or track conditions.

Trainers who receive free stabling for their horses at Santa Anita Park understand they are committing to racing their horses,” the report states. “However, there are no written policies mandating trainers to fulfill a certain number of starts in order to ‘earn’ the free stalls.”

In addition, the task force did not find evidence showing trainers lost stalls for not running in enough races.

Despite not finding any evidence of criminal activity, the task force said it would continue investigating. In addition, as part of its 17-page report, the task force outlined several recommendations to improve equine safety at the Arcadia racetrack and others across the state.

A copy of the report can be found here.

The Stroanch Group, which owns Santa Anita, issued a statement thanking Lacey’s office for their efforts.

“We are all committed to the same thing–the highest level of equine safety and welfare–and we will continue to do everything possible to promote equine and rider health and safety,” the statement read. “And we are gratified that the District Attorney’s report into the conduct and conditions at Santa Anita Park found no evidence of misconduct.”

Santa Anita is scheduled to open for its six-month winter/spring meet next Thursday.

According to the task force’s report, 56 horses died at the Arcadia track from July 1, 2018 to the end of last month. The report notes that the necropsies reviewed indicated several of the horses had pre-existing conditions for degenerative conditions. However, it also stipulates that none of the veterinarians, trainers, or jockeys identified any issue that would have revealed the conditions.

In response to the deaths, Santa Anita implemented a five-member panel that conducts pre-race evaluations. All five must agree a horse is cleared to run. However, even with the panel, the report says injuries and fatalities have continued to occur.

Santa Anita purchased a standing PET scan machine which will be used to examine bones and joints for structural damage and to determine if a horse is at risk for a catastrophic injury. Track officials plan on investing in more equipment as well.

There were also questions raised about the viability of the racing surfaces, and whether a sealed, or compacted, dirt surface in rainy conditions is safe. According consultants interviewed by the task force said the key to preventing injuries for a track to provide a consistent surface regardless of conditions.

In a statement, the California Horse Racing Board (CHRB) said it agreed with the task force’s report and that many of the recommendations have either already been implemented or are in the works.

The board is already requiring Santa Anita officials to confer with jockeys, racing stewards, and others to ensure racing conditions are safe, especially in rainy weather when the track is sealed. The Board also will continue research into synthetic surfaces and whether they may be safer.

“Chairman (Gregory Ferraro) stated at the December 12 Board meeting that the CHRB can and will use its authority to suspend racing at any track if it becomes necessary,” the CHRB statement said.

Animal welfare organizations had a mixed response to the prosecutor’s report.

“We agree with DA Lacey that greater precautions are needed to improve the welfare of both equine and human athletes,” Humane Society of the United States President and CEO Kitty Block said in a statement. “Congress must pass the Horseracing Integrity Act, which would implement critical reforms that the horseracing industry is in dire need.”

However, PETA criticized Lacey for not pressing charges for abuse, saying that trainers who put their horses on medication know their animals are unhealthy.

Despite that disagreement, Kathy Guillermo, PETA’s senior vice president, said in a statement that it agrees with Lacey that more needs to happen to bolster safety.

“Legislation to increase transparency in this secret and deadly industry is essential, and PETA will continue to work to ban drugging, whipping, and all abuse in California and every racing state,” Guillermo said.