A Texas couple faces child abandonment charges after they kept a sleeping toddler in a running car while they played electronic gaming machines in a Houston area gas station. 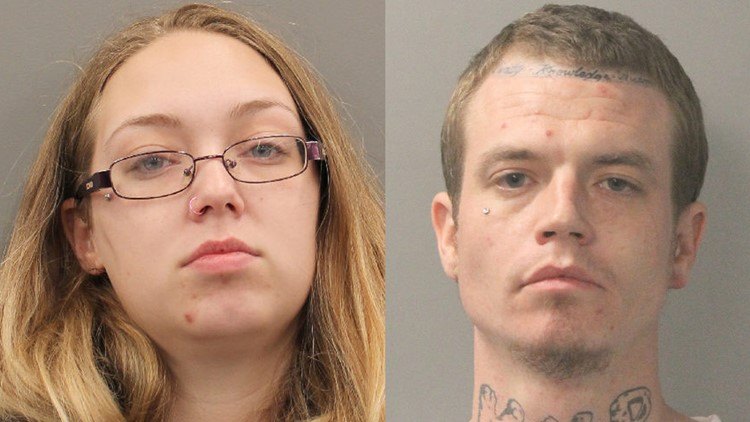 Kimberly Lynn Cook and Anthony Tyler Lindsey Blue were charged after leaving a toddler alone in a running car while they played an electronic gaming machine at a Houston-area gas station. The car was eventually stolen, but the child was found safe and returned to his grandparents. (Image: Harris County Sheriff/KHOU-TV)

According to Harris County Sheriff’s Office press release, deputies received a call shortly after midnight on Monday morning when the couple claimed they left their 16-month-old in a running Chrysler 300 while they entered the store. Upon their return, the car and the kid were gone.

During further investigation, the officers discovered that Kimberly Lynn Cook, 21, and Anthony Tyler Lindsey Blue, 29, had entered the Shell gas station more than a half-hour before to play an eight-liner.

According to Texas law, an eight-liner is a gaming device resembling a slot machine. Players can win if a horizontal, vertical, or diagonal row of objects are aligned. The games are legal in the state provided the machines award merchandise, such as toys or novelty items whose wholesale value is not more than 10 times more than the amount the play the game one time.

The couple did periodic checks, but continued to go back inside while the unlocked Chrysler 300 remained running. According to Houston TV station KHOU, the store’s surveillance video showed they ran frantically from the store after realizing the car was stolen.

Cook is scheduled to appear in a Harris County court Thursday. Blue is set for a court date on March 4. Both are in a Houston jail, according to sheriff’s records, and both have bonds set at $10,000.

The Sheriff’s Office report states that while Cook and Blue were seeking a prize, Vincent Leon Cannady, 19, and Jabari Jonathan Davis, 18, were at the gas station, saw the unattended running car, and decided to take it.

The men reportedly left the child in Houston’s MacGregor Park, which is located about 17 miles from where the car was allegedly stolen. A park ranger notified the Houston Police Department after finding the child near a playground.

It’s pretty chilly out here, and there’s a lot of wild animals running around here,” said Houston Officer Kerry Clopton told the TV station. “Things could have ended up differently.”

KHOU reported the child was evaluated at an area hospital and given to his grandparents.

While the Houston story did have a happy ending for the child involved, not all kids abandoned in cars by gambling guardians are as fortunate.

In August, an Oklahoma grandmother pleaded guilty to a federal second-degree murder charge after she left her 5-year-old grandson in the back seat of her car. She was in the Kickapoo Casino for more than six hours during the afternoon of June 21, 2018.

The high that day in Harrah, Okla., was about 90 degrees, and Alanna Jean Orr admitted in court she left him alone in the car without air conditioning.

Casinos, as part of their responsible gaming efforts, prominently display signs throughout their venues reminding patrons that it’s illegal to leave kids unattended in cars while they gamble.