Police in Dallas Saturday seized a total of 10 illegal gaming machines at two businesses, as part of that city’s ongoing effort to remove the devices in the Texas metropolis. The actions come as law enforcement officers in the state have stepped up efforts to discourage illegal gambling during the COVID-19 outbreak. 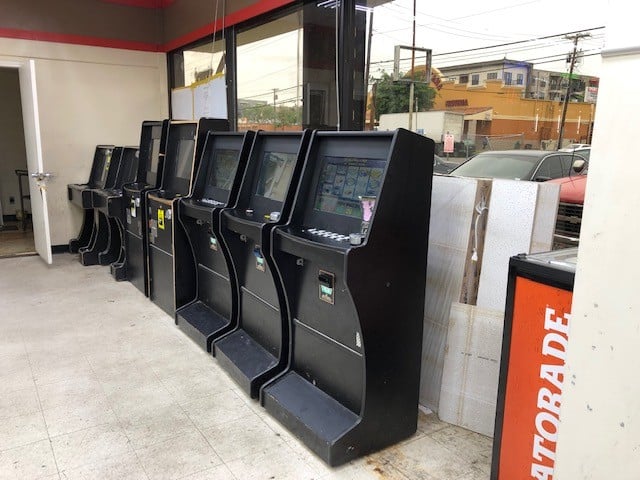 The first sting took place at a convenience store in the 2400 block of North Fitzhugh Avenue on Saturday afternoon. Members of the Dallas Police Department Vice Squad acted on a warrant that was requested after an investigation by undercover detectives. Officers seized seven gaming machines and $39,657 in cash.

An hour later, vice officers executed another warrant at a convenience store in the 10900 block of Harry Hines Boulevard in Northwest Dallas. There, cops impounded three machines and $6,591 in cash.

The busts came a day after cops confiscated five machines and $3,234 in cash from a store in the 3000 block of Webb Chapel Extension, which is about a mile and a half away from Saturday’s second sting.

Owning and operating the machines is not against Texas law, provided the stores offer prizes like toys or novelty items that have a wholesale value no more than 10 times the amount of a single bet. Providing cash prizes makes them illegal.

On Tuesday, sheriff’s deputies in Hidalgo County, located about 450 miles south of Dallas, investigated a property in Edinburg, a town about 20 miles away from the Mexican border.

Law enforcement officials found 13 people on the premises along with 18 eight-liner machines. The slot-like devices allow players to win if they can line up objects horizontally, vertically or diagonally.

The owners of the property were not located but the investigation will remain ongoing,” the sheriff’s office statement read. “Every individual at the location was identified as part of the investigation and issued a citation for the Violation of Emergency Management Order.”

The Hidalgo County order requires residents to stay home with exceptions for conducting essential business, such as going to the grocery or getting supplies needed to work from home.

Pictures posted by the sheriff’s office on its Facebook account showed some of the people in the building wore masks and a few wore gloves. However, the machines were lined side-by-side in the small building.

Two weeks ago, officers in Laredo, another Texas border city, made a bust. This came after the police department’s vice unit assigned to COVID-19 enforcement. On March 17, Laredo Mayor Pete Saenz issued an order closing entertainment venues in the city during the pandemic.

However, a week after that order was signed, officers found the Bravo Amusement Center open and offering eight-liner games. Surveillance discovered customers entering and exiting the business out of a rear door.

Officers found 30 operational machines at the gaming parlor. Per the department’s release, employees at the business were aware of the city’s order and knew they would have to stop all gaming activity.

Laredo police also confiscated $5,712 is US currency and Mexican money they said was valued at about $6,000.