Tiger Woods begins his 2020 PGA Tour season as one of the favorites at the Farmers Insurance Open at Torrey Pines in La Jolla, California, a course he knows all too well. 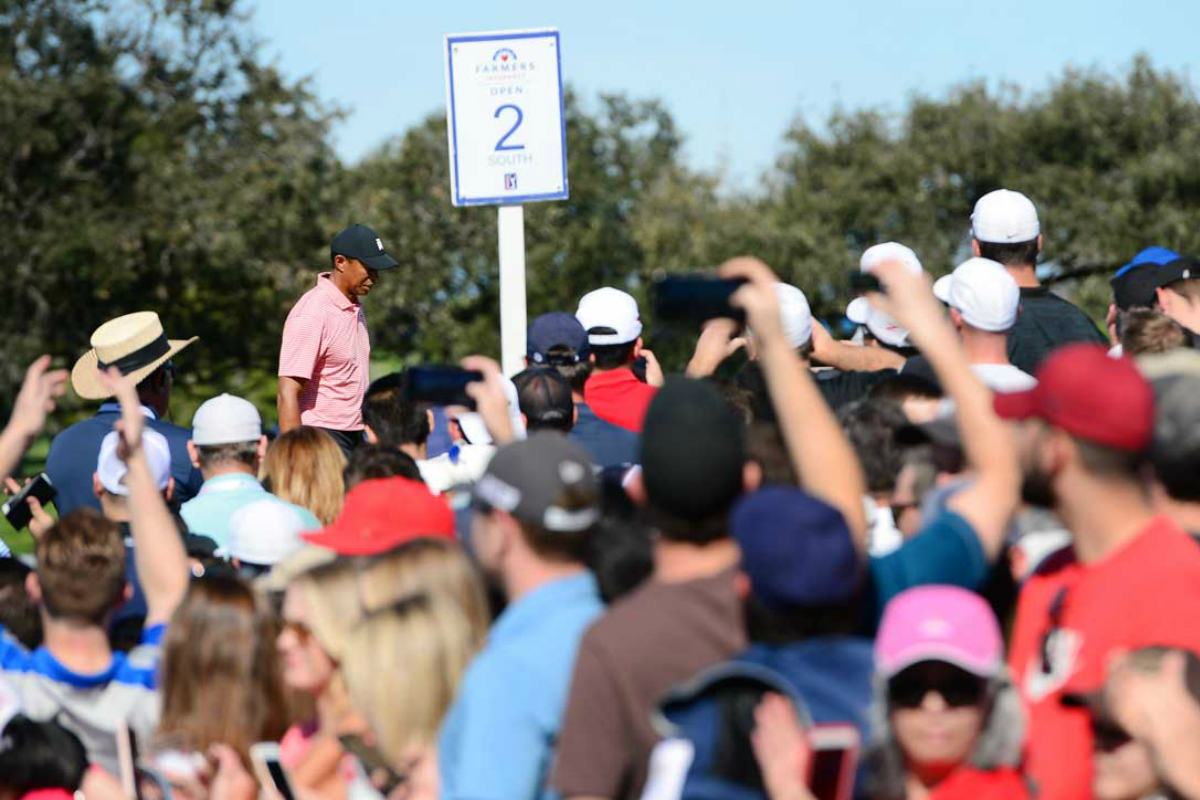 The 82-time PGA Tour winner is at 12/1 to win his 83rd this week. A $100 bet nets $1,200 should Woods prevail. The 44-year-old has seven Farmers Open victories to his legendary resume, his first coming back in 1999. Torrey Pines is also the site of his unforgettable 2008 US Open win, where he hobbled around on an injured leg to win in a playoff.

In order to be a good player or be considered a good player in football, maybe you can get to a decade of playing in the league. Here, we’re measured by decades,” Woods said Tuesday.

“It’s a different sport, but it’s neat to see the young kids come out. I’ve only seen Collin (Morikawa) hit balls, never had a chance to play with him until this week.”

With a win, Woods will sit atop the PGA Tour’s all-time wins list. He currently shares that honor with the late, great Sam Snead.

The Farmers features a strong 156-player field. While Woods headlines each time he’s inside the ropes, Rory McIlroy is the odds-on favorite at 7/1.

Since finishing T5 last year at the event, the 30-year-old McIlroy has won four times around the world. He won the 2019 PGA Tour Player of the Year award, claimed the FedEx Cup title, and is now ranked No. 2 in the world.

McIlroy is well-rested, as he took the last six weeks off. He has his sights focused on becoming the planet’s top-ranked golfer, a distinction he last held in 2013.

“It’s been a goal of mine for a while,” McIlroy said yesterday. “Winning four times last year, I closed the gap a little.”

McIlroy continued, “There was a point in the middle of last year where I was four points behind Brooks (Koepka). And then, once I won the Tour Championship and then in China (WGC-HSBC Champions), I kind of saw that gap closing.”

Winning this week will be no easy task. A slew of stars also have short odds, including 2017 Farmers winner Jon Rahm (9/1), Xander Schauffele and defending champ Justin Rose (16/1), and Rickie Fowler and Hideki Matsuyama (20/1).

With the smart money on the host of favorites, the odds are long on numerous players who could easily win this week.

The over/under for the winning score is 271.5 strokes. Par is 288. Nine of the last 10 Farmers have been higher than that number.